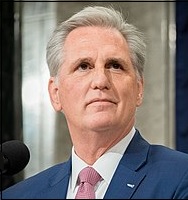 Congressman Kevin McCarthy (R-CA), the former House Majority Leader, is counting the days until he might be able to return to that post if Republicans win back the House of Representatives in the November 8 election. But on Tuesday, McCarthy made himself public enemy number one to upwards of 75 percent of Americans when he told Punchbowl News that if he’s in charge there will be a rethinking of U.S. financial support for Ukraine. In the interview, McCarthy said this:

“I think people are gonna be sitting in a recession and they’re not going to write a blank check to Ukraine. They just won’t do it. … It’s not a free blank check. And then there’s the things [the Biden administration] is not doing domestically. Not doing the border and people begin to weigh that. Ukraine is important, but at the same time it can’t be the only thing they do and it can’t be a blank check.”

No one has been writing any blank checks to Ukraine. Despite 57 House Republicans voting against a $40 billion aid package to Ukraine in May, the bill passed. And despite the $40 billion aid package being spun by the right-wing Heritage Action as a one-year giveaway that “only lasts through September of this year,” the Congressional Budget Office released a report showing that the funding stretches through 2031 with the bulk of the funds earmarked for 2023 through 2028.

McCarthy’s position stands in stark contrast to the overarching support of the American people to help Ukraine against Vladimir Putin’s murderous dictator regime that launched an unprovoked war against it. According to the Office of the United Nations High Commissioner for Human Rights, Putin’s illegal war on Ukraine has killed more than 6300 civilians, 397 of which were children. Another 723 children have been injured.

According to a Reuters/Ipsos poll released on October 5, the vast majority of Americans – 73 percent – say that the United States should continue its support of Ukraine, despite Putin’s threats to deploy tactical nuclear weapons.

Americans fully understand that if Putin is not delivered a humiliating defeat in Ukraine, America’s NATO allies in countries close to Russia’s border may be next in line for a Putin attack. Under NATO’s Article 5, the U.S. is contractually bound to provide support. That could make the funds flowing to Ukraine look like chump change.

McCarthy’s statement could be seen as giving aid and comfort to the enemy. The U.S. has received widespread credit for doing a Herculean job of building and sustaining unified support among its allies in Europe to help Ukraine financially, with military equipment, and through sanctions against Russia. Any suggestion from a sitting member of Congress that continued U.S. support might be in jeopardy simply aids Putin’s toxic propaganda campaign and shores up his own ability to survive politically. That reality has many questioning if McCarthy’s remark was simply to curry favor with Donald Trump, who called Putin a “genius” and “savvy” over his strategy for invading Ukraine.

The Trump wing of the Republican party has gotten support on its pro-Putin spin from Tucker Carlson, host of a widely-watched Fox News show. The Washington Post reported last month that Carlson has been so pro-Putin that Russian state-owned media are now airing his comments, translated into Russian.

McCarthy’s comment could also sap the morale of the Ukrainian troops who are making major headway in taking back territory illegally seized by Russia. Senator Chris Murphy (D-CT), who is a staunch supporter of Ukraine, told Politico that Republicans were “openly advertising that they are prepping to hand Ukraine to Putin” if they regain control of the House in November.