The Market Is Freaking Out Over the Potential for a Perfect Storm: Fed Tightening, Shaky Mega Banks, and a Sharp Decline in Household Wealth 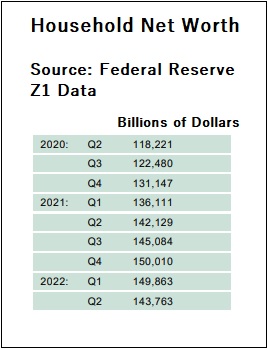 The Dow Jones Industrial Average dropped 1,276 points yesterday for a decline of 3.94 percent. The Dow’s losses were outpaced by the tech-heavy Nasdaq, which gave up 632.8 points for a drop of 5.16 percent.

The sharp selloff was triggered by the 8:30 a.m. report yesterday morning, an hour before the opening bell of the New York Stock Exchange, that inflation had come in hotter than expected in August. Wall Street had been looking for a 0.1 percent decline in the Consumer Price Index (CPI). Instead, the August reading showed an increase of 0.1 percent. The year-over-year rate slowed to 8.3 percent from 8.5 percent in July.

The Fed is set to meet next Tuesday and Wednesday and with the CPI number coming in hotter than anticipated, there is now talk of the Fed slamming on the brakes more than anticipated, with at least a 75 basis point hike in the Fed Funds rate and Larry Summers pushing for a full point move. (Larry Summers is the last person the Fed should be listening to.) That rate talk is freaking out the stock market, which is keenly aware of what further sharp rises in interest rates can do to stock valuations – particularly the valuations of the Wall Street megabanks which continue to hold tens of trillions of dollars (notional or face amount) of derivatives – despite bringing down the entire U.S. economy with those derivatives in 2008.

The biggest bank in the United States – by assets, by deposits, by derivatives, or by felony counts – is JPMorgan Chase. Year-to-date, through yesterday’s close, it has lost 26 percent of its market value and has been put on a leash by the Fed, unable to prop up its stock price with share buybacks, the magic alchemy that its Chairman and CEO, Jamie Dimon, has been using for years to keep his job despite an unprecedented crime spree at the bank.

Derivatives at JPMorgan Chase spiked by $14.42 trillion in the first quarter of this year, soaring from $45.84 trillion on December 31, 2021 to $60.26 trillion on March 31, 2022. That’s an increase of 24 percent in a three-month span. That information comes from page 18 of the Office of the Comptroller of the Currency’s quarterly report on derivatives in the banking system. The OCC just released its latest derivatives report for the second quarter of 2022 yesterday, which showed that JPMorgan Chase’s derivatives had settled back somewhat to $56.2 trillion as of June 30, 2022. That’s still an increase of $10.36 trillion in the span of six months.

Equally frightening, the OCC includes the following two paragraphs in its latest report:

“Before the 2008 financial crisis, trading revenue at banks typically ranged from 60 percent to 80 percent of consolidated BHC [Bank Holding Company] trading revenue. Since the 2008 financial crisis and the adoption of bank charters by the former investment banks, the percentage of bank trading revenue to consolidated BHC trading revenue has decreased and is typically between 30 percent and 50 percent. This decline reflects the significant amount of trading activity by the former investment banks that, while included in BHC results, remains outside insured commercial banks. More generally, insured U.S. commercial banks and savings associations have more limited legal authorities than their holding companies, particularly in the trading of commodity and equity products.

“In the second quarter of 2022 banks generated 101.0 percent of consolidated holding company trading revenue, an increase from 70.4 percent in the previous quarter….”

Let us simplify those two paragraphs for you. There is dangerous gambling going on in taxpayer-backstopped, federally-insured commercial banks – on a par with the derivatives crisis that blew up the U.S. financial system in 2008.

Even more frightening, the latest OCC report shares this:

That’s where the bulk of the risks are in the commercial banks. But Morgan Stanley is also one of the largest derivative dealers with total notional (face amount) in derivatives of $35.4 trillion as of June 30. Morgan Stanley holds its derivatives at its bank holding company rather than at the two federally-insured banks it owns. That might make Morgan Stanley easier to unwind in a crisis but it doesn’t make its ability to spread contagion throughout the financial system any less dangerous. Each of its derivative trades has a counterparty on the hook for potential losses.

These five financial institutions represent 84 percent of all derivatives held at the 25 largest bank holding companies in the United States. And it is highly likely that some of the counterparties on the other side of these derivative trades are not going to be in a position to make good on the trades if things go further south. We’re thinking of Deutsche Bank and Credit Suisse, whose share prices are now both in the single digits and have been on a swoon for a decade. (See chart below.) 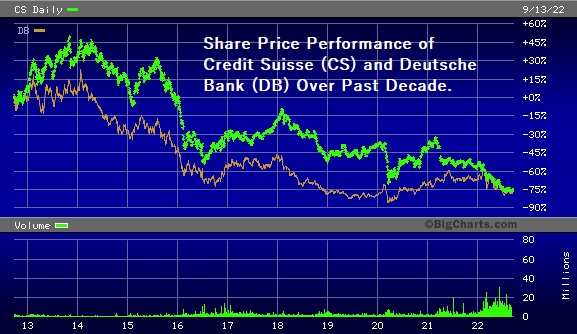 Add to these percolating risks the potential for Americans to dramatically scale back their consumer spending because of the dramatic shrinkage in their household net worth. Two-thirds of U.S. GDP comes from consumer spending. If consumers don’t spend, earnings don’t rise at a host of publicly-traded companies. If earnings don’t rise, share prices fall, creating a self-reinforcing exodus from stocks.

Last Friday, the Federal Reserve released its Z1 statistics. The data showed that U.S. household net worth fell by a record $6.1 trillion in the second quarter. The heaviest contributor to that loss in household wealth was the $7.7 trillion decline in stock values.

Add to all of this the fact that the Fed has close to the highest level of bond holdings in its history – $5.7 trillion in U.S. Treasuries and $2.7 trillion in Mortgage-Backed Securities (MBS) – that it is trying to gradually reduce without scaring the socks off of the bond market, sending interest rates spiking, credit card rates soaring, and consumers looking for a bunker.

Given all of these headwinds, that 1,276-point drop in the Dow yesterday might have been an underreaction.