As the chart below indicates, JPMorgan Chase is the worst performing stock among its peer banks as of the close of trading yesterday. 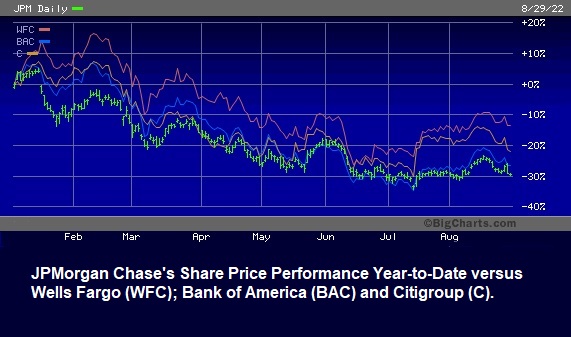 Why did the Fed put JPMorgan Chase on a leash regarding buybacks? According to the bank’s most recent quarterly report (10-Q) filed with the Securities and Exchange Commission, the answer is as follows:

“As a result of the expected increase in the SCB [Stress Capital Buffer] in the fourth quarter of 2022 and GSIB [Global Systemically Important Bank] surcharge in the first quarter of 2023, the Firm has temporarily suspended share repurchases.”

There is also this nugget of information in the 10Q:

“As directed by the Federal Reserve, total net repurchases and common stock dividends in the first and second quarter of 2021 were restricted and could not exceed the average of the Firm’s net income for the four preceding calendar quarters.”

In July of 2017, Thomas Hoenig, then Vice Chair of the Federal Deposit Insurance Corporation (FDIC), sent a letter to the U.S. Senate Banking Committee. He made these points in his letter regarding banks using their capital to buy back their own stock and paying generous dividends to shareholders:

What exactly do share buybacks do for the corporation? According to an analysis by Lenore Palladino for the Roosevelt Institute, buybacks work like this:

Artificial inflation of JPMorgan Chase’s share price through buybacks might explain why the stock market has shrugged off five felony counts brought by the Justice Department against the bank since 2014 as its Board kept the same Chairman and CEO, Jamie Dimon, in place throughout the crime spree.

The Roosevelt Institute’s Palladino has some additional thoughts on exactly who is benefiting from this market manipulation of share prices. She writes:

Last Monday we reported on a $1.8 billion loan in which JPMorgan Chase was involved to finance the largest ski resort deal in history. The family business of an 18-year member of JPMorgan Chase’s Board of Directors, James Crown, was a key participant in the deal. But the loan details were never disclosed in the bank’s public filings with the Securities and Exchange Commission.

JPMorgan Chase refers to James Crown as an “independent” Director. The bank writes in its proxy filing with the SEC that all of its non-management Board members had only “immaterial relationships with JPMorgan Chase,” thus they can be called independent. But $1.8 billion does not sound “immaterial” to us.

Equally of note, James Crown has directly benefited from the bank’s stock buyback binge. According to JPMorgan’s proxy filing this year, Crown is the beneficial owner of 12,282,729 shares of JPMorgan Chase stock. As of yesterday’s close, those shares had a market value of $1.4 billion. Dimon has the second largest holding of shares among Board Members, with a beneficial ownership of 8,487,173 shares, valued at $970.8 million as of yesterday’s close.

The $84 billion that the bank spent buying back its own stock from 2017 to 2021 directly benefited these two Board members (as well as other Board members with sizeable holdings of the stock).

Despite the clearcut evidence that stock buybacks by the largest depository banks in the U.S. enrich the 1 percent while depriving the U.S. economy of necessary capital, Congress has failed to outlaw the practice. Instead, Congress included a wimpy 1 percent excise tax on share buybacks when it recently passed the Inflation Reduction Act of 2022. The bill was signed into law on August 16, 2022 by President Biden.