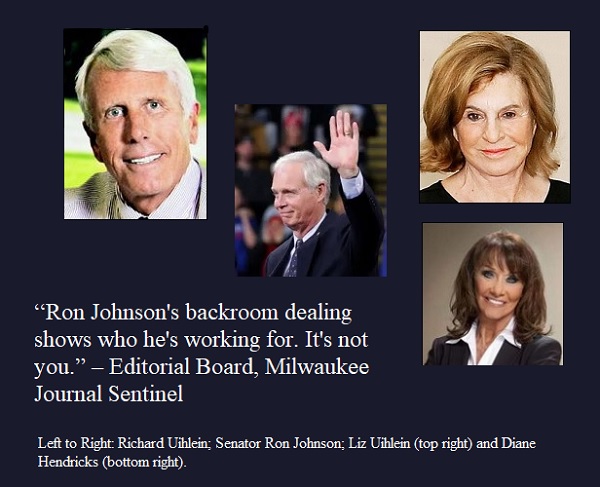 Senator Ron Johnson (R-WI) spoke on a right-wing radio show this past Tuesday and suggested that Social Security and Medicare be eliminated as federal entitlement programs and become subject to approval by Congress each year as part of its discretionary spending authority. (You can listen to Johnson’s words at this link.)

What Johnson is proposing is the decades-long dream of fossil fuels billionaire Charles Koch and his late brother, David. And that makes perfect sense because, to a large degree, Johnson owes his Senate seat to two Koch-funded front groups, Americans for Prosperity (AFP) and Freedom Partners. In Johnson’s close 2016 race against Democrat Russ Feingold, Americans for Prosperity and the Freedom Partners Action Fund ran ad campaigns for Johnson. The Center for Media and Democracy reported last year that “In the 2016 cycle, Freedom Partners Action Fund, the main Koch-backed super PAC at the time, dropped nearly $3 million into the Wisconsin Senate race to support Johnson and attack his liberal opponent, Russ Feingold.”

But Johnson doesn’t just work to further the Koch agenda. The agenda of billionaires Richard (Dick) and Elizabeth (Liz) Uihlein are near and dear to his heart. The Uihleins own packaging supplies company, Uline. Dick Uihlein is an heir to the Schlitz brewing fortune.

According to FEC records, Liz Uihlein has contributed $3 million year-to-date to the Wisconsin Truth PAC, which has in turn spent $5.6 million supporting Ron Johnson’s campaign.

FEC records also show that Dick Uihlein, year-to-date, has contributed $18.28 million to the Super PAC, Club for Growth Action, which is infamous for its inflammatory attack ads against Democrats.

The FEC also reports that Dick Uihlein has contributed $6,158,582.00 year-to-date to the Restoration PAC. That PAC in the 2020 election cycle spent $15.8 million targeting Joe Biden and millions more targeting Democratic Senators from states of Michigan, Georgia, Virginia, and Illinois.

Liz Uihlein’s $3 million donation to the Wisconsin “Truth” PAC would be funny, were it not so dangerous. Urban Milwaukee reports as follows:

“In the first 18 months of the 2022 election cycle, the Uihleins doled out $38 million to support federal GOP candidates, party committees, and Super PACs, ranking them 2nd among all individual contributors.

“Some of the couple’s contributions went to the campaigns of several ultra-rightwing members of Congress and Big Lie proponents who claim the 2020 presidential election was rigged, including Republican Reps. Andy Biggs and Paul Gosar, of Arizona, Marjorie Taylor Green, of Georgia, Mo Brooks, of Alabama, and Madison Cawthorn, of North Carolina.”

“In November 2017, with the administration of President Donald Trump rushing to get a massive tax overhaul through Congress, Sen. Ron Johnson stunned his colleagues by announcing he would vote ‘no.’

“Making the rounds on cable TV, the Wisconsin Republican became the first GOP senator to declare his opposition, spooking Senate leaders who were pushing to quickly pass the tax bill with their thin majority. ‘If they can pass it without me, let them,’ Johnson declared.

“Johnson’s demand was simple: In exchange for his vote, the bill must sweeten the tax break for a class of companies that are known as pass-throughs, since profits pass through to their owners. Johnson praised such companies as ‘engines of innovation.’ Behind the scenes, the senator pressed top Treasury Department officials on the issue, emails and the officials’ calendars show.

“Within two weeks, Johnson’s ultimatum produced results. Trump personally called the senator to beg for his support, and the bill’s authors fattened the tax cut for these businesses. Johnson flipped to a ‘yes’ and claimed credit for the change. The bill passed.

“The Trump administration championed the pass-through provision as tax relief for ‘small businesses.’

“Confidential tax records, however, reveal that Johnson’s last-minute maneuver benefited two families more than almost any others in the country — both worth billions and both among the senator’s biggest donors.

“Dick and Liz Uihlein of packaging giant Uline, along with roofing magnate Diane Hendricks, together had contributed around $20 million to groups backing Johnson’s 2016 reelection campaign.

“The expanded tax break Johnson muscled through netted them $215 million in deductions in 2018 alone, drastically reducing the income they owed taxes on. At that rate, the cut could deliver more than half a billion in tax savings for Hendricks and the Uihleins over its eight-year life.”

The ProPublica investigation was published on August 11, 2021. The editorial page of the Milwaukee Journal Sentinel was so sickened by the revelations that the very next day it ran a scathing editorial against Johnson. It read in part:

“A blockbuster scoop by ProPublica on Wednesday makes crystal clear who Ron Johnson represents: He is the senator for the ultra-wealthy.

“The exposé details how Wisconsin’s Republican senator ensured that his wealthiest donors made out like bandits in the massive 2017 tax bill that GOP leaders marketed as a ‘middle-class tax cut.’

“Thanks to Johnson’s demands, it wound up delivering a huge portion of its billions in savings to just 82 of America’s wealthiest families. And the senator’s top donors — billionaires Diane Hendricks and Dick and Liz Uihlein — were with Michael Bloomberg at the very top of a short list of those who gained the most.

“Though he tried to defend himself on Wednesday, Johnson’s secret, closed-door maneuvering on the tax bill is one more reason he’s unfit to represent Wisconsin citizens. The sooner he’s removed from office, the better for our democratic republic.”

The January 6, 2021 attack on the Capitol was merely a symptom of the disease that is eating away at democracy in America. The cancerous disease is the billionaire money in political campaigns, unleashed by the Supreme Court’s 5-4 Citizens United v FEC decision in 2010 and its prodigy. Forbes reports that since that decision came down, the Uihleins have pumped $190 million into political campaigns.

Until Americans elect a Congress that will get serious about campaign finance reform, representative government in the U.S. will continue to slip further from our grasp.