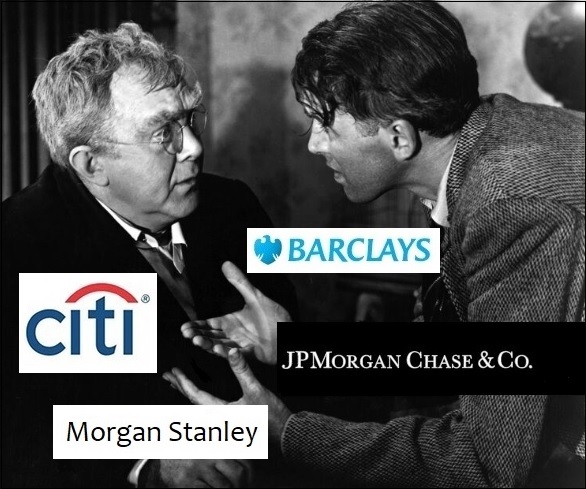 What do you get when you mix federally-insured banks with Wall Street trading casinos? You get the potential for catastrophic risks for the U.S. taxpayer and astronomical riches for the CEOs of the banks and the hedge fund titans they serve. Why is this Faustian bargain tolerated by Washington lawmakers – especially after the greatest financial collapse since the Great Depression in 2008? Because the Wall Street fat cats throw a lot of money into the political campaigns of members of Congress, ensuring that no matter how many times these Frankenbanks make outrageous blunders involving billions of dollars, Congress will conduct a superficial investigation and move on.

Below we examine outrageous money blunders by Barclays, Citigroup, JPMorgan Chase and Morgan Stanley – all of which have the earmarks of the brand of money incompetence as George Bailey’s Uncle Billy in Frank Capra’s It’s a Wonderful Life. Absent-minded Uncle Billy is sent to make a large bank deposit for Bailey’s bank and mistakenly hands the deposit over in a newspaper to the villainous Mr. Potter, bringing the bank to the edge of collapse.

Against that backdrop, consider the news from Reuters on Monday. Barclays, which owns a federally-insured bank in the U.S., Barclays Bank Delaware, made the mistake of issuing $17.6 billion of securities – in error. According to Reuters, Barclays had made an SEC filing to sell a maximum of $20.8 billion “of complex structured and exchange-traded notes,” but then overshot that amount by “about 75%.” How exactly do the investment bankers involved in the deal, the underwriters’ counsel, and the bank’s compliance officers not notice that you overshot your target by $17.6 billion?

Reuters reports that Barclays is expected to set aside $1.2 billion “in litigation and conduct charges in the second quarter, mainly to cover costs arising from the error….”

Citigroup, which has thousands of compliance personnel, pulled its own Uncle Billy in August 2020 when it mistakenly wired creditors of the cosmetics company, Revlon, $900 million in loan principal, rather than just the interest that was due on the loan. A number of creditors refused to return hundreds of millions of dollars of the money to Citigroup, and a court agreed with them, forcing Citigroup to have to restate its earnings. That was just one of many blackeyes for Citigroup, which had to secretly borrow a cumulative $2.5 trillion from the Fed from December 2007 through June 2010 because it lost track of how much subprime debt it had off its balance sheet that could hop back on the balance sheet through put clauses in its Structured Investment Vehicles (SIVs).

JPMorgan Chase, of course, is Uncle Billy on steroids. Consider this paragraph from the report prepared by the Senate’s Permanent Subcommittee on Investigations after JPMorgan Chase lost at least $6.2 billion gambling in exotic derivatives in London using deposits from its federally-insured bank (the London Whale scandal):

“The bank’s reliance on Ms. Drew to police risk within the CIO [Chief Investment Office] was so excessive that some senior risk personnel first became aware of the CIO’s outsized synthetic credit positions from the media. John Hogan, the bank’s Chief Risk Officer, for example, told the Subcommittee that the articles about the ‘London Whale,’ which first appeared on April 6, 2012, surprised him. Mr. Hogan said that the Synthetic Credit Portfolio was not on his radar in an ‘alarming way’ prior to that date. It speaks volumes that the financial press became aware of the CIO’s risk problems before JPMorgan Chase’s Chief Risk Officer.”

JPMorgan Chase is the largest deposit-taking bank in the United States. According to the Federal Deposit Insurance Corporation (FDIC), as of June 30, 2021 it had 4,925 branch bank offices across the United States accepting insured deposits from moms and pops, small businesses, pension funds and the like. The vast majority of these depositors have no idea that the bank is allowed by Congress and its regulators to make wild gambles in derivatives.

The “Ms. Drew” referenced in the above paragraph was supposed to be policing trading risk for the bank by supervising the derivative traders in London. But Ms. Drew didn’t even possess a trading license herself. That’s illegal at trading houses known as broker-dealers on Wall Street. At broker-dealers, a supervisor must have the proper licenses to oversee traders.

The Senate’s Permanent Subcommittee on Investigations held hearings on the matter. Ina Drew testified and told the Subcommittee that the investment securities portfolio at the federally-insured bank exceeded $500 billion during 2008 and 2009 and as of the first quarter of 2012 was $350 billion. But Wall Street On Parade learned from the industry’s self-regulator, FINRA, that during the 13 years that Drew supervised these stunning amounts of securities trading, she had neither a securities license nor a principal’s license to supervise other traders.

Morgan Stanley is another cautionary tale on Wall Street. It also owns federally-insured banks, although their size pales in comparison to the $2 trillion in deposits held by JPMorgan Chase’s domestic branches.

Morgan Stanley was one of the megabanks that acknowledged almost $1 billion in losses when the family office hedge fund, Archegos Capital Management, blew up in March of 2021. Wall Street megabanks had ginned up derivatives that allowed Archegos to obtain 85 percent margin loans on insanely concentrated stock positions. But Morgan Stanley has had far larger losses from trading blowups in the past. During the 2007-2008 subprime mortgage crisis, one of Morgan Stanley’s traders, Howie Hubler, lost $9 billion of the firm’s capital betting on subprime debt. Hubler didn’t get a character to play his role in “The Big Short” movie but Michael Lewis, who wrote the book on which the movie is based, shared insights with his readers about Hubler.

Lewis describes Hubler as a star bond trader at Morgan Stanley, making $25 million in one year prior to the collapse of the subprime mortgage market. Hubler was one of those who made early bets that the lower-rated subprime bonds would fail. He used credit default swaps (derivatives) to make his bets. But because Hubler had to pay out premiums on these bets until the price collapse came, he placed $16 billion in other bets on higher-rated portions of the subprime market, according to Lewis. When those bets failed, Morgan Stanley lost at least $9 billion.

This is the stuff of banana republics – not a financial system befitting a superpower.