On May 4, 2020, while Jay Clayton was the Chairman of the Securities and Exchange Commission in the Trump administration, the SEC granted approval for a new national stock exchange called MEMX, whose Wall Street megabank owners have admitted to a collective nine criminal felony counts brought by the U.S. Department of Justice.

The SEC’s letter approving MEMX as a national securities exchange stated that the SEC was confident that MEMX would “prevent fraudulent and manipulative acts and practices, promote just and equitable principles of trade…”;  “not permit unfair discrimination between customers, issuers, or dealers…” and that it would “protect investors and the public interest.”

The SEC included that language in its letter because that is what is demanded of a Self Regulatory Organization (SRO), which is a designation given to all national stock exchanges in the United States.

Allowing admitted felons, that have repeatedly engaged in market rigging, to self-regulate and run their own stock exchange is nothing short of breathtaking, especially since five of the owners of MEMX were previously charged with price fixing on the Nasdaq stock exchange.

Adding to the concerns about this stock exchange, it does not have a trading floor where human traders can police the activities of other human traders. To the right is a photo of what the New York Stock Exchange’s 16,000 square foot trading floor looks like. To the left below is a photo from the MEMX website showing the only physical facility that it has posted on its website. The job openings posted at MEMX indicate that it has a “Fully Remote Workforce” who can work in the currently approved states of: New Jersey, New York, Connecticut, Pennsylvania, Florida, Illinois, Kansas, Georgia, North Carolina, Nevada and Oregon. 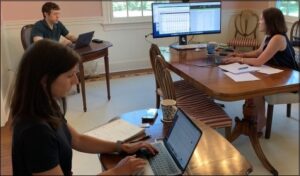 Perhaps because Nasdaq was intimately aware of how five of these MEMX owners had rigged its stock market in the 90s, John Zecca, the Chief Legal Officer and Chief Regulatory Officer of Nasdaq, filed a letter of concern with the SEC prior to the Commission’s approval of the MEMX application to run a national stock exchange. The letter said in part:

“…as Nasdaq prepares for the prospect of facing yet another new player in a growing field of competitors, Nasdaq notes that any approval by the Commission of the MEMX application would highlight a significant disparity in its regulatory treatment of the incumbent exchanges. Indeed, it would be incongruous for the Commission to freely permit large banks and broker-dealers, which control much of the order flow for equities securities in the United States, and which in many cases own or operate their own alternative trading systems [Dark Pools], to form a consortium to own and operate a new national securities exchange, without also permitting investor-owned exchanges like Nasdaq to own or operate [Dark Pools] and similar venues on the same terms as do the banks and broker-dealers.”

Not only is the SEC allowing megabanks such as JPMorgan Chase, Citigroup, Goldman Sachs, Morgan Stanley, and Bank of America’s Merrill Lynch to operate Dark Pools (where stock trading occurs in the dark) but the SEC has for years been allowing these firms to trade their own bank’s stock in their own Dark Pool. And each of these megabanks is also allowed to hold trillions of dollars in opaque derivatives contracts, despite derivatives being a key cause of the financial collapse in 2008.

But the rotten cherry on the top of this explosive concoction is that JPMorgan Chase, Citigroup, Goldman Sachs, Morgan Stanley and Bank of America are also allowed by federal regulators to operate federally-insured banks which collectively hold trillions of dollars of the life savings of average Americans.

Jay Clayton, who was at the helm of the SEC when MEMX was approved, had previously represented 8 of the 10 largest Wall Street banks as their underwriting counsel in the three years before he became SEC Chairman under Trump. Those banks included five of the MEMX owners: JPMorgan Chase, Citigroup, Goldman Sachs, Morgan Stanley and Bank of America/Merrill Lynch.

Another dubious actor that is a MEMX owner is Citadel Securities, part of billionaire Ken Griffin’s sprawling tentacles in U.S. markets.

Citadel Securities has captured a giant chunk of retail trading by generous payments for order flow to at least nine online brokers. (See our report: Citadel Is Paying for Order Flow from Nine OnLine Brokerage Firms – Not Just Robinhood.) There is growing concern among members of Congress that Citadel Securities’ motivation in paying for this order flow is to be able to trade against unsophisticated retail traders, known as “dumb money” on Wall Street, in order to unfairly enhance its own bottom line. The disciplinary history of Citadel Securities advances that theory.

On June 25, 2014, Citadel Securities was fined a total of $800,000 by its various regulators for serious trading misconduct. Citadel paid the fines in the typical manner, without admitting or denying the charges. The New York Stock Exchange alleged that the following had occurred:

In addition, according to the York Stock Exchange, Citadel “erroneously sold short, on a proprietary basis, 2.75 million shares of an entity causing the share price of the entity to fall by 77 percent during an eleven-minute period.” In another instance, according to the New York Stock Exchange, Citadel’s trading resulted in “an immediate increase in the price of the security of 132 percent.”

On January 9, 2014, the New York Stock Exchange charged Citadel Securities LLC with engaging in wash sales 502,243 times using its computer algorithms. A wash sale is where the buyer and the seller are the same entity and no change in beneficial ownership occurs. (Wash sales are illegal because they can manipulate stock prices up or down.) Citadel Securities paid a $115,000 fine for these 502,243 violations and walked away. That’s less than 23 cents per violation.

On January 13, 2017 the SEC settled a case against Citadel Securities for $22.6 million in fines and disgorgements, alleging the following had occurred:

More recently, on July 16, 2020, Citadel Securities agreed to a $700,000 fine by Wall Street’s self-regulator, FINRA, for executing customer orders at prices worse than it traded for its own account. Citadel Securities was allowed to neither admit nor deny the charges. The activities occurred over a period of years.

On November 13, 2020, FINRA fined Citadel Securities $180,000 for failing to mark 6.5 million equity trades as short sales. Citadel did not admit or deny the allegations but paid the fine. The activity occurred between September 14, 2015 and July 21, 2016, according to FINRA.

After the stock market crash of 1929 and Great Depression that followed, the U.S. Senate Banking Committee was incentivized by public outrage to conduct three years of hearings into the self-dealing and rigged trading by the major Wall Street banks. The hearings generated bold front-page headlines showing entrenched corruption in the trading practices on Wall Street that had led to the crash. That level of public attention prompted Congress to pass the Securities Exchange Act of 1934, which created the Securities and Exchange Commission and empowered it to register, regulate and oversee brokerage firms, clearing agencies, and stock exchanges.

The ’34 Act, as it’s known on Wall Street, specifically cited the national interest in explaining why stock exchanges had to be Federally regulated. The legislation makes the following critical points regarding how corrupted trading can lead to economic disaster:

Tens of millions of Americans lived through the nightmare of an inadequately policed Wall Street during and after the financial collapse in 2008. Clearly, the Dodd-Frank financial reform legislation of 2010 did not accomplish the job of reform. It’s long past the time for the Senate Banking Committee to hold comprehensive hearings and pass serious legislation that will actually protect the public from the Wall Street cabal.