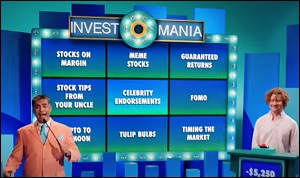 Redditors at the subreddit Superstonk are posting obscenities directed at Gary Gensler, Chair of the Securities and Exchange Commission (SEC), over the new ad campaign from the SEC that appears to target young Reddit investors as fools that do no research before investing, lose all their money, and deserve a whipped-cream pie in the face. (Yes, a young investor actually gets a whipped-cream pie in the face during two of the ads. See videos below.) CNBC ran one of the new SEC ads yesterday.

So-called “meme stocks” are heavily associated with Reddit and are specifically called out in the SEC ads, thus Redditors have concluded that the ads are directed at them.

We’ve been carefully observing the Securities and Exchange Commission for the past 37 years. This is the first time that we have ever witnessed the SEC heaping humiliation on the investing public – the investing public that it is paid by the taxpayers of America to protect from the scams that it has allowed to proliferate.

The SEC is a federal agency with law enforcement powers. The ad campaign the SEC is currently running is such an embarrassment to a federal agency that one has to seriously question the real agenda. Is the SEC attempting to get out in front of the implosion of these scams by building the narrative that the public should have known better and done their own research? It sure looks that way.

One of the ads features a slick game show host offering young contestants choices from an “Investomania” board that features such offerings as “meme stocks,” “crypto to the moon,” “tulip bulbs,” “celebrity endorsements,” among other offerings. (Tulip bulbs are a likely stand-in for blank-check companies (SPACs) which are allowed to list on the New York Stock Exchange or Nasdaq, while having zero business operations.)

The SEC could have stepped in at any time and stopped bogus companies and bogus investment fads from turning U.S. markets into a giant casino. But it didn’t.

As Wall Street On Parade reported on May 20, even when extensive reports are released that a stock trading on the New York Stock Exchange is a fraud, neither the Exchange nor the SEC take any action to delist the stock.

Last September, China declared that all transactions in cryptocurrencies were illegal. China’s central bank warned that cryptocurreny “seriously endangers the safety of people’s assets.” Congress and the SEC have done the exact opposite. They have allowed a mind-boggling array of so-called “stable coins” and cryptocurrencies to trade in the U.S.; they have allowed an unregulated crypto exchange, Coinbase, to go public on the Nasdaq stock exchange; they have allowed the public to invest in a host of publicly-traded crypto mining stocks, many of which have lost 50 to 80 percent of their market value year-to-date; and worst of all, they have allowed massive leveraging of this crypto market by permitting the CME Group to offer trading in futures on cryptocurrencies.

The lack of action on crypto by Congress and the SEC comes despite the fact that legendary investor Warren Buffett has called Bitcoin “rat poison squared”; the head of the European Central Bank, Christine Lagarde, recently said crypto is “worth nothing”; and NYU Professor and economist Nouriel Roubini has called crypto “a joke,” a “scam,” a “sh*tcoin,” and no better than “cocaine drug pushers.” (See our report: The Smartest Guys in the Room Call Bitcoin “Rat Poison Squared,” “a Colossal Pump-and-Dump Scheme” and “a Big Criminal Scam” but Federal Regulators Look the Other Way.)

Gary Gensler’s Chairmanship of the SEC is starting to look, feel and smell a lot like that of Arthur Levitt, the longest serving Chairman of the Securities and Exchange Commission from 1993 to 2001. Levitt, like Gensler, deployed a crew of public relations handlers to talk the talk on investor protections while taking little action to rein in Wall Street’s serial crimes against the public.

One of our lasting memories of Levitt was a slobbering address he gave to Wall Street’s trade association in 1994. Speaking before the Securities Industry Association on December 3, 1994 in Boca Raton, Florida, Levitt said this:

“As I meet you and greet familiar faces, I recollect previous visits to this Boca meeting — memories of Morgan Stanley’s parties, dinners with Congressional staffers, hot dogs in the St. Louis Room, and gala, invitation-only dances for honored guests and members of the old guard…I find myself looking at the industry now from a very new perspective — no longer a member of the immediate family, more like an uncle viewing the family from afar…”

An uncle. Not the cop on the beat, but an uncle. In the Gary Weiss’ book, Wall Street versus America, Weiss calls him “the terminally shame-deprived Levitt…who can spin the most laughable cop-out into an investor victory…”

Levitt came from Wall Street. He was Sandy Weill’s former business partner at the brokerage firm, Cogen, Berlind, Weill & Levitt.  The brokerage firm acquired more than a dozen companies to become Shearson Loeb Rhoades in the 60s and 70s. While Levitt was SEC Chairman, Weill put together the merger in 1998 of the federally-insured commercial bank, Citibank, with the Travelers Group insurance company, the Salomon Brothers investment bank and the Smith Barney brokerage firm, a combination that was illegal at the time. The merger created Citigroup, the behemoth that forced Congress to repeal the Glass-Steagall Act in 1999, legislation that had protected the financial system of the U.S. for 66 years. Just nine years after its repeal, much of Wall Street, including Citigroup, collapsed in a replay of 1929 when there was no Glass-Steagall Act.

For Gensler’s bio, which includes an early stint at Goldman Sachs, see here.

It’s comforting to know that thousands of Redditors will now be paying close attention to Gensler’s actions, or lack thereof, along with Wall Street On Parade.