Stable Coin and Cryptocurrency Investors Are Not the Only Ones in Tears: Ten Crypto Mining Stocks Have Fallen by 50 to 80 Percent Year-to-Date 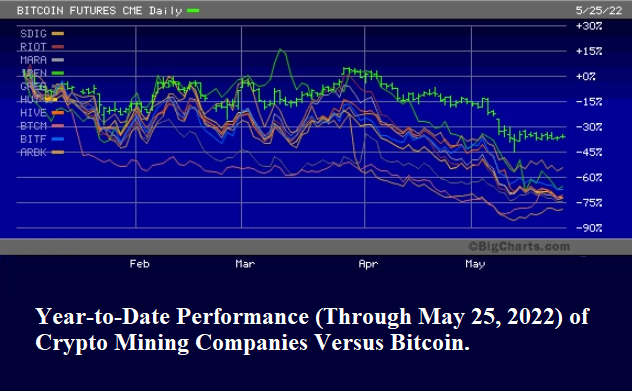 In October 2008 a group or individual using the name Satoshi Nakamoto released a paper outlining a new system for digital cash called Bitcoin. To this day, no one knows who Satoshi Nakomoto really is. For all we know, he/it/they could have been a strawman for the fossil fuels industry.

Why do we say that? Because the major beneficiary of crypto has been the fossil fuel industry which has seen a growing demand for its dirty energy from crypto mining companies while the big losers have been the environment, local communities and average citizens around the world hoping to breathe clean air and save the planet for their children and grandchildren.

Consider what Senator Elizabeth Warren had to say about crypto at a Senate hearing in June of last year:

“Cryptocurrencies have turned out to be a fourth-rate alternative to real currency. First, cryptocurrencies are a lousy way to buy and sell things. Unlike the dollar, their value fluctuates wildly depending on the whims of speculative day traders. You know, in just the last two months, the value of Dogecoin increased by more than ten-fold and then declined by nearly 60 percent. Now that may work for speculators and fly-by-night investors, but not for regular people who are looking for a stable source of value to get paid in and to use for day-to-day spending.

“Second, crypto is a lousy investment. Unlike, say, the stock market, the crypto world currently has no consumer protection — none.  As a result, honest investors and people trying to put aside some savings are at the mercy of fraudsters. Pump and dump schemes are outlawed in the case of ordinary stock, but they have become routine in crypto trading. One study found that the level of price manipulation in cryptocurrency is — and I quote — ‘unprecedented in modern markets.’

“And third, crypto has become a haven for illegal activity. Online theft, drug trafficking, ransom attacks, and other illegal activity have all been made easier with crypto. Experts estimate that last year more than $412 million was paid to criminals in ransom through cryptocurrencies. And unlike other payment systems that make it tougher to move money illegally, a key feature of crypto is its secrecy. So just in the past few weeks, cryptocurrencies made it possible for hackers to collect a ransom to release the Colonial pipeline hack and to free JBS, the world’s largest meat producer, from paralyzing cyberattacks. And every hack that is successfully paid off with a cryptocurrency becomes an advertisement for more hackers to try more cyberattacks.

“Finally, there are the environmental costs of crypto. Many cryptocurrencies are created through ‘proof-of-work’ mining. It involves using computers to solve useless mathematical puzzles in exchange for newly minted cryptocurrency tokens. Such mining has devastating consequences for the climate. Some crypto mining is set up near coal plants, spewing out filth in return for a chance to harvest a few crypto coins. Total energy consumption is staggering, driving up demand for energy. If, for example, Bitcoin — just one of the cryptocurrencies — were a country, it would already be the 33rd largest energy user in the world — using more energy yearly than all of the Netherlands.

“And all those promised benefits – the currency that would be available at no cost to millions of unbanked families and that would provide a haven from the tricks and traps of big banks – well, those benefits haven’t materialized.”

Clearly, Senator Warren was ahead of her time. During the week of May 9 of this year, a so-called “stable” crypto coin, TerraUSD, that was supposed to maintain a stable price of $1, crashed to pennies and never recovered. Its sister cryptocurrency, Luna, also collapsed.

One of the unregulated exchanges for trading crypto, Coinbase, went public in April of last year and traded as high as $368.90 intraday last November. It closed today at $69.68 – a loss of 81 percent from its intraday high last year and a year-to-date loss of 72 percent.

And for how two upstate communities in New York, Plattsburgh and Massena, fared after crypto miners set up shop, see this linked article from MIT Technology Review.