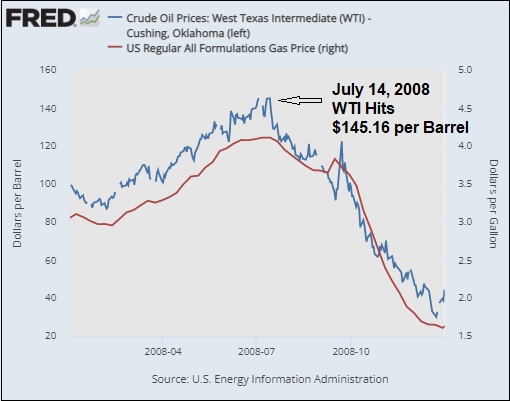 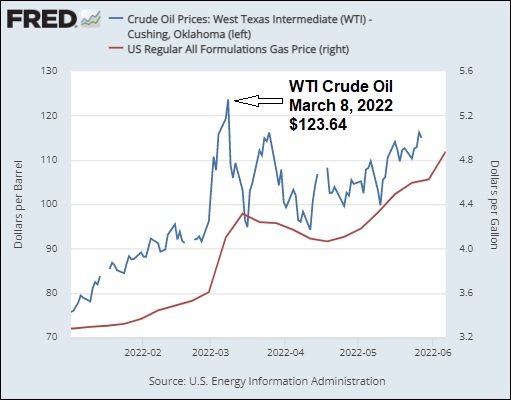 California is far from the only state where complaints of outrageous price gouging are being heard. The Daily Record of Maryland reported yesterday that a Shell station in Bowie, Maryland was charging $6.13 for a gallon of regular gas while an Exxon gas station “less than a block away, was charging just over $5 per gallon.” Most gas stations in the U.S. are independently owned and not operated by a major oil company.

The peculiar thing about the current era of gas pump prices hitting historic price levels is that the cost of crude makes up 61 percent of the cost of a gallon of gasoline, according to the Energy Information Administration (EIA). And U.S. domestic crude, known as West Texas Intermediate (WTI), is not at historic levels. WTI surged to $145.16 per barrel at its peak on July 14, 2008 and hasn’t traded near that level this year. So why are gasoline prices at the pump at historic levels?

Part of that, as the above stories illustrate, is just plain ole price gouging. But the big picture is more complicated than that. According to the EIA, in addition to the 61 percent of the price of a gallon of gas that comes from the cost of crude oil, the other 39 percent shakes out as follows: the costs of refinement (14 percent), distribution and marketing (11 percent), and taxes (14 percent).

At a hearing before the House Committee on Energy and Commerce’s Subcommittee on Oversight and Investigations on April 6, the President of Shell USA, Gretchen Watkins, testified as follows regarding the strains on the refinery industry:

“To be clear, the mismatch of oil supply and demand predates the crisis in Ukraine. The onset of the Covid-19 pandemic initially caused unprecedented global economic contraction, including a historic drop in demand for transportation fuels. The most dramatic example of that came in spring 2020 when the crude oil market collapsed and the benchmark price for U.S. West Texas Intermediate went into negative pricing for the first time in history. The drop in demand resulted in a surplus of supplies of transportation fuels such as gasoline, diesel, and jet fuel, requiring refineries to reduce production rates or shut down. In some instances, those shutdowns became permanent.

“Today, demand has recovered and is now surpassing pre-pandemic levels for many transportation fuels. But refinery throughput has not yet caught up with the post-pandemic surge in demand. The loss of Russian supply from the global market has only added pressure on an already strained refining industry that has yet to fully catch up with increasing demand.

“In response to the invasion of Ukraine, Shell announced our intent for a phased withdrawal from our involvement in Russian hydrocarbons, including crude oil, petroleum products, gas, and liquefied natural gas. Shell announced the intent to exit our joint ventures with Gazprom and related entities. This complex process is underway, and the global energy market’s reliance on Russian energy means it will take time to eliminate Russian hydrocarbons completely. Critical challenges need to be addressed along the way – from ensuring the safety of our staff, partners, and operations, to the need to sustain the supply of fuels that are essential to communities across Europe.

At the same hearing, the Chair of the Committee on Energy and Commerce, Frank Pallone, Jr., released a memorandum that included details on what President Biden has done thus far to help mitigate the pain at the pump. The memorandum included these details:

“On March 31, 2022, the Administration announced plans to release one million barrels of oil per day from the SPR for the next six months. Furthermore, in its first year, the Biden Administration approved an average of 333 drilling permits per month, approximately 35 percent higher than the number of permits approved during President Trump’s first year. The Administration has also urged the Federal Trade Commission (FTC) to investigate allegations of anti-competitive activity in the oil and gas industry.

“On March 31, 2022, the Biden Administration also announced measures to achieve energy independence beyond increasing domestic oil supplies. First, President Biden invoked the Defense Production Act of 1950 to ensure a secure supply of five critical minerals used in the production of batteries for electric vehicles, grid storage and similar uses. Second, the Administration took additional steps to increase energy efficiency, decrease demand for oil, and lower costs for consumers. Recent measures include a $3 billion expansion of Weatherization Assistance Program funding and efficiency upgrades for home appliances and equipment to help families save on utility costs, the release of $5 billion through the National Electric Vehicle Infrastructure Formula program to build out a national electric vehicle charging network, and updated fuel economy standards for cars and trucks to insulate American consumers from global gasoline market volatility.”

As for steps that every American household can take to help lower energy usage in the United States, see our report on energy saving measures here.