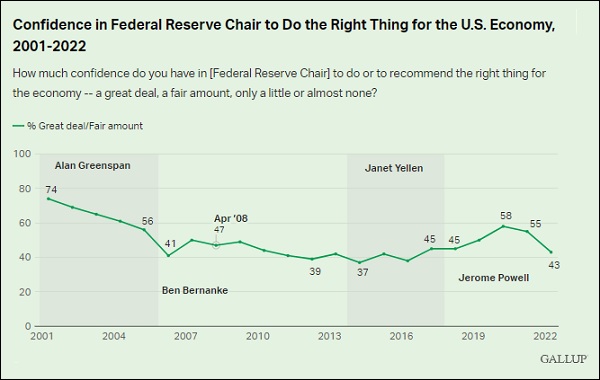 At the Fed’s press conference yesterday, Federal Reserve Chair Pro Tempore Jerome Powell was asked by Mike McKee of Bloomberg Television a series of questions on monetary policy which ended with this: “Are you concerned about Fed credibility with the American people?” Powell answered the monetary policy questions but did not directly address the credibility issue. McKee then repeated the question, phrased as follows: “Do you think the Fed has a credibility problem?”

Powell’s answer provides an alarming insight into with whom the Fed seeks to maintain confidence. Powell said this:

Powell: “No. I don’t. A good example of why would be that—so in the fourth quarter of last year, as we started talking about tapering sooner and then raising rates this year, you saw financial markets reacting, you know, very appropriately. Not to bless any particular day’s measure, but the way financial markets—you know, the forward rate curve has tightened in response to our guidance and our actions really amplifies our policy. I mean, it’s—monetary policy is working through expectations now to a very large extent. We’ve only done two rate increases, but if you look at—if you look at financial conditions, the two year [U.S. Treasury note] has—the two year is at 280 now [2.80 percent]. In September, I think it was at 20 basis points. And that’s all through the economy. People are feeling those higher rates already. And so that is—that shows that the markets think that our forward guidance is credible. And I think that’s—we want to keep it that way.”

Instead of talking about credibility with the American people, Powell spoke solely of “financial markets reacting” and how “the markets think that our forward guidance is credible.”

In effect, Powell blurted out the internal mindset of the Fed: As long as it pleases the markets and Wall Street, it has all the credibility it thinks it needs. For how the disfigured structure of the Fed has led to its unprecedented cronyism and a Wall Street-centric focus, see our report: These Are the Banks that Own the New York Fed and Its Money Button.

Unfortunately, only the wealthiest 10 percent of Americans own the vast majority of the stock market and the reality that this is really whom the Fed is serving has made its way into the collective thinking of Americans. The Fed’s trillions of dollars in bailouts to the miscreant megabanks on Wall Street during and after the financial crisis of 2008, followed by its court battles to keep that information a secret from the American people, did permanent damage to the Fed’s credibility. Its 2019-2020 bailouts of the same miscreant banks have simply cemented more bricks in the wall between the Fed and the American people. (See here and here.)

Gallup released a survey this past Monday which showed that confidence in the Fed’s Powell among the American people is lower than it was in Fed Chair Ben Bernanke during the 2008 financial crisis – the worst economic crisis since the Great Depression. In April 2008, Bernanke had a 47 percent confidence ranking among the American people. In Gallup’s latest poll, which was conducted April 1 through April 19 among a random sample of 1,018 American adults, Powell had only a 43 percent confidence ranking.

Before the 2008 financial crisis, the Fed had used only one method of bailing out banks – its Discount Window – which had to be used as a lender-of-last-resort for commercial banks, on a short-term basis and against safe collateral. For how lawyer Rodge Cohen of Sullivan & Cromwell changed all that, see our report: Sullivan & Cromwell’s Rodge Cohen: The Untold Story of the Fed’s $29 Trillion Bailout.

The Fed’s trading scandal that made headlines for months last year has also done permanent damage to the Fed’s reputation and to Powell. Numerous Fed officials have been implicated, including Powell himself. But the most egregious trading conduct, that of Robert Kaplan, the former President of the Dallas Fed, appears to be undergoing a coverup by the Fed. The Fed will not release the dates of Kaplan’s “over $1 million” in stock trades and S&P 500 futures, despite the fact that Kaplan was legally required to provide those dates for the five years he served as President of the Dallas Fed. See our report: Robert Kaplan Was Trading Like a Hedge Fund Kingpin for Five Years while President of the Dallas Fed; a Dozen Legal Safeguards Failed to Stop Him.

The Federal Reserve is the central bank of the United States whose primary mission is to set monetary policy. The Fed can’t fulfill that mission if it is simultaneously attempting to placate Wall Street. There is an urgent need for Congress to strip the Fed of its supervisory role over the Wall Street megabanks as well as its ability to bail out the trading units (casinos) of those same banks. No less than the national security and economic future of the United States hangs in the balance.