It’s now day 13 since the Fed released the names of the Wall Street trading houses that borrowed $4.5 trillion cumulatively, just in the fourth quarter of 2019, from the Fed’s repo loan facility. Not one mainstream media outlet has reported those names of the Wall Street firms or the amounts borrowed – despite the fact that we have prodded them to do so, and despite the fact that some of the largest borrowers were also bailed out by the Fed during and after the financial crash of 2008.

The Fed, which is releasing the data on a rolling quarterly basis, had previously released the names of the banks and the amounts borrowed for the last 14 days of September 2019. That cumulative total came to $769.2 billion, or an average of $54.94 billion per day that the Fed was throwing at Wall Street’s trading houses. It’s clear there was a financial crisis going on in this pre-COVID era, because the Wall Street banks had requested loans for $850.575 billion in that 14-day span, or $81 billion more than the Fed was offering. And the demands for ever larger loans from the Fed continued to spike through the end of the year in that pre-COVID era.

From September 17, 2019 to the end of 2019, $5.269 trillion was cumulatively doled out by the Fed in repo loans. From the start of the Fed’s repo loan program on September 17, 2019 to its conclusion on July 2, 2020, the Fed funneled $11.23 trillion to trading houses whose names remained secret for a full two years. The trading unit of the largest bank in the United States, JPMorgan Chase, was one of the largest borrowers in 2019. The trading unit of the bank that received the largest bailout in global banking history during and after the 2008 financial crisis, Citigroup, was a major borrower. Goldman Sachs, which has a storied history of reckless and irresponsible behavior, was a major borrower. And the trading units of numerous foreign banks, such as the Japanese bank, Nomura, and German, Deutsche Bank, were large borrowers. (The share price of Deutsche Bank, a major derivatives counterparty to Wall Street banks, was in a death spiral at the time.)

In some cases, the Fed appeared to be customizing loans for specific borrowers -– something that the Dodd-Frank financial reform legislation of 2010 expressly prohibits. On December 17, 2019, the Fed made a 13-day term loan for $6.1 billion. BNP Paribas Securities received $1 billion of that; Daiwa Capital Markets got $100 million; Deutsche Bank Securities took $3 billion; and Societe Generale took the balance of $2 billion. That’s only four firms while the legal mandate of Dodd-Frank is that the Fed can only lend to “broad-based” programs. On the same date of December 17, 2019, the Fed also made an overnight loan of $52.65 billion. Deutsche Bank took three lots of that loan totaling $6.5 billion, bringing its total borrowing on that date to $9.5 billion.

To understand how truly unprecedented mainstream media’s news blackout is, a crucial piece of media history is in order.

During the financial crisis of 2008, which saw century old, iconic names on Wall Street teetering or dropping like flies, the Fed stepped in with an alphabet soup of emergency lending programs, as well as cranking out discount window loans. While the Fed released general details of what the programs were created to do, it did not release the names of the Wall Street firms that were doing the bulk of the borrowing, or the sums borrowed by each institution.

A tenacious investigative reporter at Bloomberg News, Mark Pittman, filed a Freedom of Information Act (FOIA) request with the Fed for the names of the banks, the amounts borrowed and the terms. Under the law, the Fed had to respond in 20 business days. The Fed stalled Pittman for six months, leading to the parent of Bloomberg News, Bloomberg LP, filing a lawsuit against the Fed in the Federal District Court in Manhattan in November 2008. Bloomberg won that suit. The Fed then appealed to the Second Circuit Appellate Court.

What is particularly noteworthy about that appellate case is that the very media outlets that have drawn a blanket of darkness around the Fed’s recent disclosures, supported Bloomberg News in demanding that the Fed release the details of its emergency loans during and after the 2008 financial crisis. Filing an Amicus Curiae (Friend of the Court) brief in the case were the following:

The Amicus writers told the court this: “The public interest in disclosure in this case could hardly be greater. The [Federal Reserve] Board has lent out more than $2 trillion under the lending programs documented in the Remaining Term Reports. Despite this massive outlay, the public knows little about who has received these funds or the terms of their loans…While the Board releases aggregate data…it refuses to reveal any transaction-level data identifying where money has gone. Without this information, it is impossible to monitor the Board’s actions, and FOIA’s core purpose is defeated.”

Let that settle in for a moment: $2 trillion (which was a drop in the bucket to the actual $29 trillion that was eventually revealed) was important enough to mainstream media back then to take the issue to court, but who got $11.23 trillion in 2019-2020 is worthy of a news blackout today.

The Fed also lost at the Second Circuit Appellate Court. It was too embarrassed to take the case to the U.S. Supreme Court, because President Obama’s acting Solicitor General, Neal Katyal, planned to file a brief contrary to the Fed’s position, so a group called The Clearing House Association LLC, made up of some of the very same banks that were being bailed out by the Fed, filed their own appeal with the Supreme Court. The Supreme Court declined to hear the case in March of 2011, leaving the decision of the Second Circuit Appellate Court in place.

The Dodd-Frank Act had forced the Fed to release the transaction details of its seven emergency lending facilities in December of 2010. When the Supreme Court declined to hear the court case, the discount window transactions were released in March 2011. When the various data was released, it was widely covered by mainstream media. (See a sampling of those articles in the graphic below.)

“At some point long before the credit markets seized up in 2007, financial markets collapsed and the economy plunged into the worst recession since the 1930s, the Federal Reserve forgot that it is the central bank for the people of the United States and not a private academy where decisions of great importance may be withheld from public scrutiny. As only Congress has the constitutional power to coin money, Congress delegates that power to the Fed and the Fed must be accountable to Congress, especially in disclosing what it does with the people’s money.”

Mark Pittman died at age 52 of heart-related problems on November 25, 2009. He never lived to see the data released. Bloomberg colleague, Bob Ivry, carried the torch for him. (Ivry no longer has a job at Bloomberg.) On August 23, 2011, Ivry, together with Bloomberg reporters Bradley Keoun and Phil Kuntz wrote the following under the headline: “Wall Street Aristocracy Got $1.2 Trillion in Secret Loans.” The article is now under a paywall. The $1.2 trillion was the daily peak amount, not the cumulative total.

“Data gleaned from 29,346 pages of documents and from other Fed databases show for the first time how deeply the world’s largest banks depended on the U.S. central bank. Even as firms asserted in news releases or earnings calls that they had ample cash, they drew Fed funding in secret, avoiding the stigma of weakness.

“Two weeks after the bankruptcy of Lehman Brothers Holdings Inc. in September 2008, Morgan Stanley countered concerns that it might be next to go by announcing it had ‘strong capital and liquidity positions.’ Its Sept. 29, 2008, news release, touting a $9 billion investment from Tokyo-based Mitsubishi UFJ Financial Group Inc., said nothing about Fed loans.

“That day, Morgan Stanley’s borrowing from the central bank peaked at $107.3 billion. The loans were the source of almost all of the firm’s available cash, based on lending data and documents released more than two years later by the Financial Crisis Inquiry Commission.”

Bloomberg News is among those today that can’t seem to find its voice on the Fed’s bailouts of 2019. Winkler seems to have gone through a major attitude adjustment. On March 11, 2016, Winkler, as Editor-in-Chief-Emeritus at Bloomberg, wrote a fantasy opinion piece titled “Stop Bashing Wall Street. Times Have Changed.” Winkler appears to recite the new official narrative for mainstream media when it comes to Wall Street:

“One of the reasons the American economy is performing better than any of the largest in Asia and Europe is that its regulators have repaired the damage of the financial crisis and the worst recession since the Great Depression. Led by the Federal Reserve, they replaced incentives for reckless speculation with catalysts for old-fashioned credit creation backed by levels of capital that are unprecedented in modern times.”

In reality, the “reckless speculation” has continued on steroids on Wall Street. The megabanks were trading their own stock in their own dark pools in 2016, as they continue to do today, while spending tens of billions of dollars each year to buy back their own stock and artificially prop up its share price. The Office of the Comptroller of the Currency would report that as of March 31, 2016, just four banks held 91 percent of $192.9 trillion in notional derivatives held by all banks and savings associations in the U.S. Those four banks were JPMorgan Chase, Citigroup’s Citibank (which blew itself up with derivatives in 2008), Goldman Sachs Bank USA, and Bank of America – the same banks that were taking giant sums from the Fed’s emergency repo loan facility in 2019. Those same four banks continue to hold the vast majority of derivatives held by all banks in the U.S., with dubious counterparties on the other side of some of those trades.

Mark Pittman would be devastated at what has become of America’s mainstream press when it comes to the powerful interests of the Fed and Wall Street. 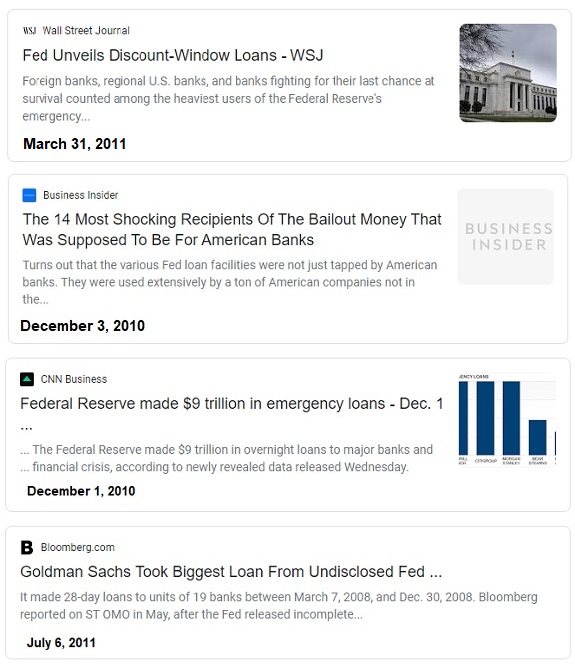