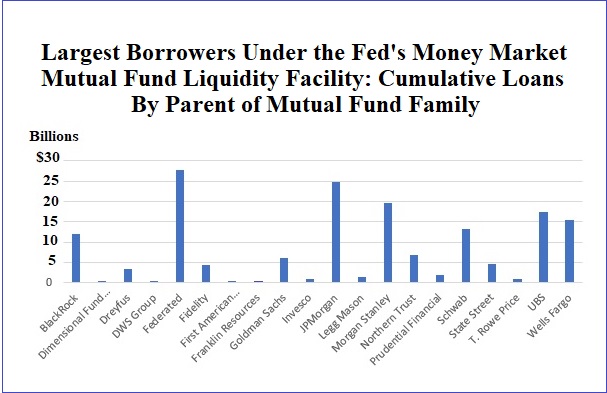 The Federal Reserve has set up a veritable obstacle course to prevent the public from drilling down to see that just six big Wall Street firms received the lion’s share of loans from its emergency funding facility called the Money Market Mutual Fund Liquidity Facility (MMLF). The MMLF made emergency loans from March 23, 2020 through April 23, 2020, but the program did not end on April 23, 2020. That’s because these were not overnight loans. They were loans made for periods up to as long as 11 months in some cases – taking the program into 2021. The MMLF made loans against paper that could not be sold elsewhere that was sitting in money market funds that were having difficulty raising cash to meet redemption requests. The loans were for the same maturity as the paper being put up as collateral.

The Fed knew that a Government Accountability Office (GAO) audit would want to combine all borrowing under one corporate parent name, in order to see who got the lion’s share of the money. The Fed knew this because that’s exactly what the GAO did when it audited the Fed’s Wall Street bailout programs that occurred during and after the financial crisis of 2008.

To throw hoops and hurdles in the way of easy access to that information, the Fed listed some of the mutual fund sellers under their corporate parent name but listed other loans from the same corporate parent under the obscure name of individual mutual funds. For example, money market funds owned by BlackRock were sometimes listed as “BlackRock.” In other cases, they were listed as “TempCash” and “Plan Investment Fund.”

Another large borrower, Federated, had its money market loans listed under “Federated” as well as acronyms “MOF” and “TFOF” – designations that members of the general public or even government auditors would find next to impossible to decode.

It took Wall Street On Parade 12 hours to look up the CUSIP numbers associated with the loans to determine the parent corporation and combine all of their loans under one corporate parent name.

We were left with the overarching suspicion that the Fed intentionally released this data in this form to hide the fact that, once again – despite a statutory mandate to do otherwise – it set up a loan facility that failed the test as being broad-based to a large number of participants.

As the chart above shows, just six Wall Street firms received 72 percent of the $162.9 billion in cumulative loans made under the MMLF. The total cumulative loans for the six firms were as follows:

In other reporting we have done on the various Fed bailout programs, we have also provided the term-adjusted totals to illustrate which firms had use of the cheap Fed money for longer periods of time. With other Fed bailout programs, that was a fairly simple process because the Fed provided a column on its Excel spreadsheet with the specific number of days in the term of the loan. For example, in its Primary Dealer Credit Facility, the Fed provided a column showing the loan was outstanding for one day, 14 days, 28 days, 42 days, etc. But with the MMLF, that column has gone missing. Just the maturity date is listed for 1,508 individual loan transactions, meaning we would have to calculate the term for all of those loans.

Instead, we simply calculated which Wall Street firm had the largest sums outstanding into 2021. It became quickly clear that Morgan Stanley got larger sums for longer periods of time. No other firm came close. 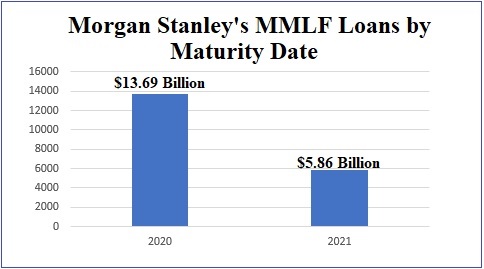 Under the Federal Reserve Act’s statutory mandates, the Fed’s emergency loan programs are to be short-term in nature, available to a broad base of participants, and not used to bail out any single institution. Loans lasting for almost one year are decidedly not short-term in nature. Six institutions obtaining 72 percent of a Fed emergency bailout program is decidedly not broad-based. And extremely large sums were used to bail out Commercial Paper and Certificates of Deposits issued by the giant global bank, Credit Suisse, that were residing in the money markets funds. That was a big help to Credit Suisse by not driving down the value of its paper further.

On just one day, March 30, 2020, BlackRock borrowed $1.48 billion against Credit Suisse Certificates of Deposits that resided in its various money market funds.

It was not until March 31, 2022 that the Fed released the names of the firms taking out loans from its MMLF and the amounts they had borrowed. The Fed was required to do that under the 2010 financial reform legislation known as Dodd-Frank. We’re very certain that Congress intended that information to be far more user-friendly than the transaction data the Fed provided to the public for its MMLF.

There are numerous reasons why the Fed might have wanted to obscure what was going on in the MMLF. For one thing, much of Fed Chair (Pro Tempore) Jerome Powell’s money has been managed by BlackRock. Now we see that BlackRock was getting yet another bailout of its own problems from the Fed while it had also received three no-bid contracts to run the corporate bond/ETF bailout programs for the Fed. See our report: Fed Chair Powell Had 4 Private Phone Calls with BlackRock’s CEO Since March as BlackRock Manages Upwards of $25 Million of Powell’s Personal Money and Lands 3 No-Bid Deals with the Fed.

How long is it going to take before the Senate Banking and House Financial Services Committees conduct critically-needed investigations of these Fed bailout programs and/or order a GAO audit?