JPMorgan Chase Has Sunk $84 Billion Into Buying Back Its Stock Over Past 5 Years; Now Its Stock Is Sinking 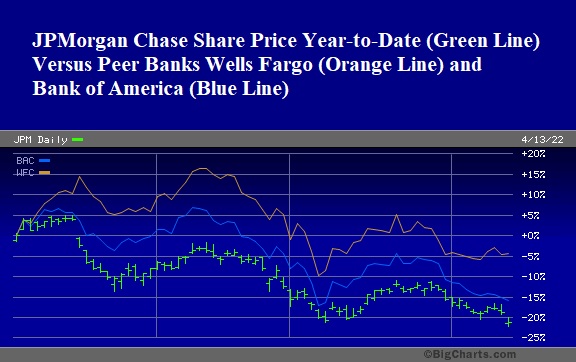 JPMorgan Chase’s publicly-traded shares closed out 2021 with a share price of $158.35. At the closing bell yesterday, shares of JPMorgan Chase were at $127.30, a year-to-date price decline of 19.6 percent. That’s dramatically worse than its peer bank, Wells Fargo, and modestly worse than another peer bank, Bank of America.

That performance is shocking because the Chairman and CEO of JPMorgan Chase, Jamie Dimon, is paid like a rock star by his Board, treated like a financial wizard by the business press, and perpetually brags about his bank’s “fortress balance sheet” in his musings to Congress and shareholders.

But the share price performance is not shocking if one considers that one of the artificial props under the share price for the past five years has been Dimon’s crony Board of Directors authorizing giant share buybacks of the stock. According to YCharts (give the chart time to load) since January 1, 2017 through December 31, 2021 – a span of five years – JPMorgan Chase has spent a total of $84.312 billion buying back its own stock. In eight of those quarters, it spent more than $5 billion buying back its own shares.

What may have contributed to the drop in the bank’s share price in the first quarter of this year is the fact that, according to its recent quarterly earnings report (8-K), it spent only a net $1.7 billion buying back its stock in the current quarter. It notes in the same report, however, that “The Firm’s Board of Directors has authorized a new common equity share repurchase program of $30 billion, effective May 1, 2022.”

When the largest bank in the United States has to spend tens of billions of dollars buying back its own stock over long stretches of time and its share price sinks when it’s not able to do that, maybe regulators need to open the gates at this so-called “fortress” bank and look for rotten timber.

There’s plenty of reasons for regulators and Congress to be concerned. JPMorgan Chase is the only bank in the United States to have been charged with five felony counts since 2014 by the U.S. Department of Justice, admitting to all of them.

It is the only federally-insured bank in the United States to have made more than a hundred billion dollars in gambles in exotic derivatives in London – using deposits from its insured bank – and lose $6.2 billion of depositors’ money. The matter, which became known as the London Whale scandal in 2012, was so alarming that the U.S. Senate’s Permanent Subcommittee on Investigations conducted an extensive investigation over nine months and issued a 300-page report. One paragraph from the report captures the culture at this bank:

JPMorgan Chase has also been judged by a federal government repository to have the riskiest profile among its peer banks.

“In Chapter 4, we compared JPMC [JPMorgan Chase] to the Gambino crime family to demonstrate the many areas in which these two organizations had the same goals and strategies. In fact, the most significant difference between JPMC and the Gambino Crime Family is the way the government treats them. While Congress made it a national priority to eradicate organized crime, there is an appalling lack of appetite in Washington to decriminalize Wall Street. Congress and the executive branch of the government seem determined to protect Wall Street criminals, which simply assures their proliferation.”

Chaitman and Gotthoffer added this for good measure:

“If Jamie Dimon is running a criminal institution, he should be prosecuted for it. And law enforcement has the perfect tool for such a prosecution: the Racketeer Influenced and Corrupt Organizations ACT (RICO).

“Congress enacted RICO in 1970 in order to give law enforcement the statutory tools it needed to prosecute the people who committed crimes upon orders from mob leaders and the mob leaders themselves. RICO targets organizations called ‘racketeering enterprises’ that engage in a ‘pattern’ of criminal activity, as well as the individuals who derive profits from such enterprises. For example, under RICO, a mob leader who passed down an order for an underling to commit a serious crime could be held liable for being part of a racketeering enterprise. He would be subject to imprisonment for up to twenty years per racketeering count and to disgorgement of the profits he realized from the enterprise and any interest he acquired in any business gained through a pattern of ‘racketeering activity.’ ”

Dimon has not been prosecuted for running a criminal enterprise. Instead, his crony Board of Directors has made him a billionaire.

It’s long past the time for the Senate’s Permanent Subcommittee on Investigations to open a new, and broader, investigation of this bank. Clearly, the American people can’t rely on regulators to get the job done.