The New York Stock Exchange (NYSE) has had its share of scandals. There was the late 1930s when former NYSE President Richard Whitney went to prison for embezzlement.  In 2004 New York State Attorney General Elliot Spitzer took the NYSE and its former Chairman and CEO, Richard Grasso, to court over charges of violating New York State non-profit law by giving an obscene $187.5 million pay package to Grasso. In 2014 bestselling author Michael Lewis went on 60 Minutes to report that “the United States stock market, the most iconic market in global capitalism, is rigged” after writing a very convincing book, “Flash Boys,” explaining exactly how it was rigged. (We could go on and on but you get the point.)

Let’s start with the case of QuantumScape, which trades on the New York Stock Exchange under the ticker, QS. On April 15, the hedge fund Scorpion Capital, which has a short position in shares of QuantumScape and stands to profit from its decline, released a breathtaking 188-page report in which it called the company a “fraud,” a “scam,” an “impending pump and dump,” and wrote that it “Makes Theranos Look Like Amateurs.” (Theranos claimed it had created a technology that would revolutionize the blood-testing industry. It was eventually exposed as a fraud. But Theranos was not a publicly-traded company listed on the New York Stock Exchange, enticing potentially thousands of average moms and pops to invest in its shares. It was a private company wooing well-heeled investors.)

QuantumScape is a battery developer for electric vehicles. It began trading on the New York Stock Exchange on November 27, 2020. At the time, it had no commercial product and zero revenues.

The report from Scorpion Capital sums up its analysis of the company like this:

“The company claims to have a ‘magic material’ that’s led to a breakthrough solid-state battery for electric vehicles. Even amidst the current mania of retail gambling on vaporous SPAC promotions, QS stands out for its reckless, nosebleed valuation of $15B – or roughly ~ $80MM per employee, a mere 188 per LinkedIn. QuantumScape, across its investor materials, has only released about 7 key ‘data’ slides with a few scraps of information. This leads us to pen a new valuation metric – ‘Market Cap per Powerpoint Slide’ – in this case, about $2B for each tantalizing crumb.”

QuantumScape responded to Scorpion Capital’s allegations in a Twitter post, stating that it “stands by its data, which speaks for itself. We have provided higher transparency than any other solid-state battery effort we are aware of, with details on current density, temp, cycle life, cathode thickness, depth of discharge, cell area, pressure.”

Yesterday, we contacted QuantumScape via email and asked if it had filed a libel lawsuit in court against Scorpion Capital. We didn’t receive an answer. We then contacted Scorpion Capital and asked the same question. We received a prompt response from Kir Kahlon, Scorpion Capital founder and Chief Investment Officer, who has an MBA from Harvard Business School. Kahlon told us this: “We are not aware of any court actions ever filed against us after a report.”

Let this all sink in for a moment: a 188-page report is released to the public calling your New York Stock Exchange-listed company a “fraud,” and eight months go by and you haven’t challenged that report in a court of law.

Below is the stock chart of QuantumScape since going public in November of 2020. If we were to draw a chart of a hypothetical pump and dump scheme, this is what our chart would look like. 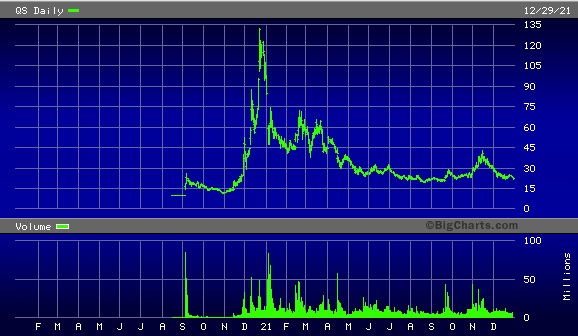 Chart of QuantumScape Since Going Public in November 2020

Next up is RLX Technology. It went public on the NYSE on Friday, January 22 of this year at $12 a share. It calls itself an “e-vapor company in China” catering to “adult smokers’ needs.” We wrote about its Orwellian prospectus on April 1. The company’s shares closed yesterday on the New York Stock Exchange at $3.78 – a loss of 69 percent in less than a year’s time.

The underwriters of the NYSE listing of RLX Technology were Citigroup Global Markets Inc. and China Renaissance Securities (Hong Kong) Limited. Citigroup is the Wall Street megabank that blew itself up in 2008 and became a 99-cent stock by the spring of 2009. (Its own shares are still down 90 percent from January 1, 2007. It did a dodgy 1-for-10 reverse stock split in 2011 to dress up its share price.)

Ben Bernanke’s Fed decided to secretly pump $2.5 trillion in cumulative loans into Citigroup between December 2007 and July of 2010 so that it could survive and bring deals like RLX Technology to the New York Stock Exchange, when it wasn’t otherwise occupied building out its rap sheet.

Citigroup’s Salomon Smith Barney was also the home to Jack Grubman, the poster boy for the fraudulent research scandals of the dot.com era. In one internal email Grubman had written: “Most of our banking clients are going to zero and you know I wanted to downgrade them months ago but got huge pushback from banking.”

Then there is the broader problem on the New York Stock Exchange with its Chinese company listings. At an October 26 House hearing, Congressman Brad Sherman said that many of these companies are Cayman Islands shell companies masquerading as real Chinese companies. On top of that problem is the problem with listed Chinese companies failing to comply with U.S. accounting laws.

For the past two decades, China has been stonewalling U.S. regulators over access to the work papers of auditors of publicly traded companies that are based in China but listed on U.S. stock exchanges. China takes the position that these audit work papers hold state secrets and it prohibits audit firms from releasing the documents directly to U.S. regulators. Last December, both houses of Congress unanimously passed legislation called the Holding Foreign Companies Accountable Act. The legislation requires that the Securities and Exchange Commission identify companies that are listed in the U.S. which the Public Company Accounting Oversight Board (PCAOB) cannot “inspect or investigate completely because of a position taken by an authority in the foreign jurisdiction.” The law requires the delisting of the company’s stock if its audits cannot be inspected for three consecutive years.

The legislation also requires that U.S. listed companies provide documentation showing that they are not owned or controlled by a governmental entity. That’s a big problem for the New York Stock Exchange.

According to the U.S.-China Economics and Security Review Commission (USCC), an independent U.S. government agency, as of May 5 “there were 248 Chinese companies listed on these U.S. exchanges with a total market capitalization of $2.1 trillion.”

The USCC further reports that among the 248 Chinese companies listed on exchanges in the U.S., eight companies are “national-level Chinese state-owned enterprises.” State-owned companies in China are controlled by the Chinese Communist Party (CCP).

All eight of those companies trade on the New York Stock Exchange.

Then there are the growing Chinese government restrictions on what type of activities China-based companies are allowed to engage in. (See our report: U.S. Mega Banks Were Sitting on $6.56 Billion of Chinese Education Stocks that China Just Eviscerated.)

The chart below offers a sampling of Chinese-company stock performance on the New York Stock Exchange this year. 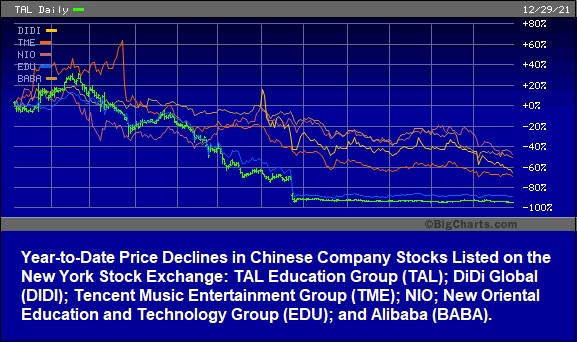