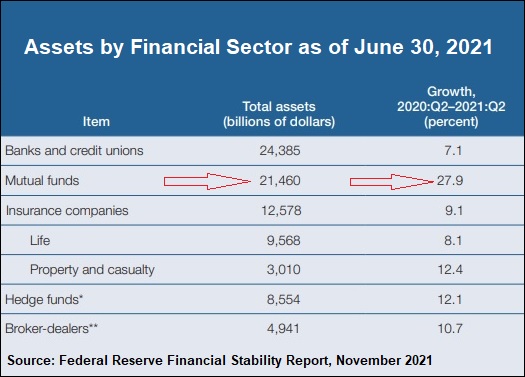 The word “leverage” appears 107 times in the Federal Reserve’s Financial Stability Report that was released yesterday. The second mention provides a warning of what happens when leverage blows up the financial system – something Americans learned all too well in 2008:

“Excessive leverage within the financial sector increases the risk that financial institutions will not have the ability to absorb even modest losses when hit by adverse shocks. In those situations, institutions will be forced to cut back lending, sell their assets, or, in extreme cases, shut down. Such responses can substantially impair credit access for households and businesses.”

Perhaps this is an understatement from the Fed. Not only did major institutions like Bear Stearns and Lehman Brothers “shut down” from insolvency in 2008, putting tens of thousands of workers out of a job, but this is also what can happen when too much leverage props up dubious assets on Wall Street: the taxpayer can have a gun put to their head to bail out every major trading house on Wall Street; the government can have a gun put to its head to nationalize Freddie Mac, Fannie Mae, and the giant insurer AIG in order to bail out the derivatives of Goldman Sachs and its brethren on Wall Street; millions of Americans can lose their jobs and their homes to foreclosure; the Federal Reserve can be forced to push interest rates to zero to prop up asset prices, thus forcing senior citizens to get by on a lot less of a return on their CDs and Treasury notes; and because so much capital was wasted on toxic assets instead of flowing to the real economy, the U.S. is still living through subpar economic growth, which is preventing tens of millions of Americans from earning a livable wage.

The Fed’s Stability Report had this to say on leverage lurking at life insurance companies:

We really hate to mention this to the Fed, but the reason that the U.S. government had to rescue the giant life insurance company, AIG, in 2008 was because mega banks on Wall Street, supervised by the Fed, had tied a derivatives umbilical cord around their neck and the neck of AIG.

We know that AIG is back in the game of derivatives again. As insane as it sounds that federal regulators would allow this to happen, the Office of Financial Research, a unit of the U.S. Treasury, reported in its 2017 Financial Stability Report that the mega banks on Wall Street were once again interconnected through derivatives to insurance companies that included AIG, Lincoln National Corp., Ameriprise Financial, Prudential Financial, and Voya Financial.

As for leverage at hedge funds, yesterday’s Fed report had this to share:

One needs to carefully parse the above paragraph. Why does the Federal Reserve, which has bank examiners in every mega bank that owns a trading house on Wall Street, need to ask the SEC for data about hedge fund leverage? The prime brokerage operations of those mega banks are the ones making those highly leveraged loans to hedge funds. (See our report: Archegos: Wall Street Was Effectively Giving 85 Percent Margin Loans on Concentrated Stock Positions – Thwarting the Fed’s Reg T and Its Own Margin Rules.)

On September 23, the Federal Reserve released its Z.1 statistical release on the Financial Accounts of the United States. The section on “Corporate Equities” reveals that at the end of 2019, the market value of all publicly-traded equities (stocks) in the United States had reached $38.47 trillion. By June 30, 2021, in the midst of an ongoing pandemic, the market value of all publicly-traded equities had surged to $54.768 trillion, an increase of 42 percent. (See page 130, Line 29 at this link.)

The U.S. stock market, at $54.768 trillion, is larger than the combined GDP of the United States, China, Japan, Germany, France, Italy, Spain, and the U.K., according to GDP data from the World Bank. If one wants to grasp how out-of-control leverage is on Wall Street, and its hedge fund appendages, just think about how the U.S. stock market went from a value of $38.47 trillion to $54.768 trillion in a year and a half.

As for who will be losing their shirts when this bubble pops, the Fed’s report offers this:

“The median leverage ratios of younger retail investors are more than double those of all investors, leaving these investors potentially more vulnerable to large swings in stock prices, as they have a larger debt service burden. Moreover, this vulnerability is amplified, as investors are now increasingly using options, which can often boost leverage and amplify losses.”

One other detail in the Fed’s report from yesterday that needs the urgent attention of the Senate Banking Committee is the fact that mutual fund assets have grown by 27.9 percent between June 30 of last year to June 30 of this year. Total assets of mutual funds at the end of this year’s second quarter stand at $21.46 trillion. Bank and credit union assets, in comparison, have grown by only 7.1 percent in the same span of time. This is likely because of a giant surge of money flowing into money market mutual funds and fixed income bond mutual funds in search of a higher yield than leaving money liquid in the bank. But since money market mutual funds had to be bailed out by the Fed last year, allowing them to continue to grow does not sound like a prudent course of action. (See chart at the top of this article.)