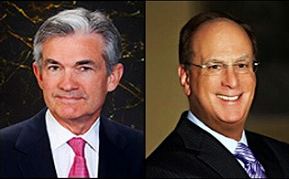 Last Tuesday, Mike Derby reported at the Wall Street Journal that the President of the Dallas Fed, Robert Kaplan, had “made multiple million-dollar-plus stock trades in 2020, according to a financial disclosure form provided by his bank.” The individual stocks included shares of Apple, Alphabet (Google), Alibaba,  Amazon, Chevron, Delta Airlines, Facebook, General Electric, Johnson and Johnson, Oracle, Tesla and numerous others. Kaplan previously spent more than two decades at Goldman Sachs, one of the largest trading houses on Wall Street, and, apparently, he thinks he still works there.

Think about this for a moment. While Fed Chair Jerome Powell is repeatedly testifying to Congress last year that its every monetary move during the pandemic was on behalf of the average American, the Dallas Fed President is making million-dollar bets on big tech stocks the Justice Department is investigating for anti-trust activity. In fact, in October of last year, the Justice Department and 11 state attorneys general sued Google for anti-trust actions.

Fed Presidents are privy to market-moving information that the general public is not privy to. That was especially true last year as the Fed took unprecedented measures to combat the economic impact of the pandemic. The Fed slashed the Fed Funds rate to zero, established a panoply of bailout programs for Wall Street, and began buying up $120 billion a month in Treasuries and mortgage-backed securities.

The news reports of the stock trading by Fed Presidents rightfully caused outrage over the “let them eat cake” attitude as thousands of businesses shut down, millions of workers lost their jobs and families struggled to pay their bills.

By Thursday of last week, both Kaplan and Rosengren said they would sell all of their individual stock positions by the end of September. (File that under too little, too late.)

This level of arrogance on the part of two Fed Presidents is part of an overarching level of contempt for the sensibilities of the American people by the Federal Reserve over many decades.

One of those no-bid contracts allowed BlackRock to use Fed money to buy up corporate bonds and Exchange Traded Funds (ETFs) in the secondary market, including BlackRock’s own ETFs. American taxpayers’ money was used to backstop losses in these operations.

And while the individual stock-trading of Kaplan and Rosengren is indeed an outrage, it pales in comparison to what the New York Fed has been doing for decades.

On October 30 of last year, Wall Street On Parade reported that the New York Fed signed a contract with JPMorgan Chase on December 31, 2008 to serve as the sole custodian of the Fed’s holdings of agency Mortgage-Backed Securities (MBS). The contract was updated on January 30, 2017 and continues to this day. As of last Wednesday, JPMorgan Chase was holding $2.4 trillion (principal amount) in MBS backed by Fannie Mae, Freddie Mac or Ginnie Mae that belongs to the Fed.

During the term of that Fed contract, JPMorgan Chase has admitted to five felony counts brought by the U.S. Department of Justice. But, apparently, in the Fed’s view, serial criminal activity is not a reason to shop for a new custodian for $2.4 trillion in Fed assets.

Then there is the crony “best practices” committees that the New York Fed has established with Wall Street’s serial lawbreakers.

On May 20, 2015, JPMorgan Chase was charged by the U.S. Department of Justice with one felony count for rigging foreign exchange markets. It pleaded guilty to the charge. But despite that, the New York Fed allowed Troy Rohrbaugh, then the head of Foreign Exchange Trading at JPMorgan Chase, to continue to serve as the Chair of its Foreign Exchange Committee, which sets “best practices” for the industry. The Committee was meeting six to eight times a year and the meeting venues rotated from the offices of the New York Fed to the offices of JPMorgan Chase and other banks.

The New York Fed is so confident that it can create clubby Wall Street groups with impunity, that it even sponsors a Financial Markets Lawyers Group that includes counsel or general counsel from the very firms that have been charged with cartel activity in rigging Libor interest rates and/or rigging foreign exchange trading.

The cronyism at the New York Fed is so bad that one of its former bank examiners, Carmen Segarra, had to visit the Spy Store in Manhattan to purchase a tiny tape recorder to reveal to the world just how ingrained the cronyism is at the New York Fed. Segarra charged in a lawsuit filed in October 2013 that she was told to change her negative examination of Goldman Sachs by New York Fed colleagues, who also obstructed and interfered with her investigation. According to her lawsuit, when she refused to alter her findings, she was terminated in retaliation and escorted from the Fed premises.

And for how the New York Fed is allowed by Congress to be literally owned by the mega banks on Wall Street while also able to open an unlimited money spigot to bail these same banks out every time they are on the brink of blowing themselves up, see our report: These Are the Banks that Own the New York Fed and Its Money Button.

The structure of the Fed would be an embarrassment to a banana republic. That Congress allows this structure to continue says volumes about the state of democracy in the U.S.

Please call your Senators and House Rep today and demand hearings on reforming the Fed.