Dallas Fed President Kaplan Was Making Bold, Market-Moving Statements to Media During 2020 Crisis; the Same Year He Traded Tens of Millions of Dollars in Stocks and S&P 500 Futures

Last year, during the worst health crisis in more than a hundred years in the United States, Dallas Fed President Robert Kaplan was frequently throwing gasoline on the fire in broadcast and print media interviews. Also in 2020, Kaplan was trading in and out of S&P 500 futures, a sophisticated instrument used by hedge funds to time the market and/or short the market. The Dallas Fed will not say if Kaplan engaged in shorting the market during a national health crisis. (Shorting means to place a bearish bet that the market or a security will fall in value.)

Kaplan gave a total of 68 interviews with the press in 2020, an eyebrow raising number for a man also trading S&P 500 futures.

Twice in the span of six days in May of 2020, Kaplan predicted that unemployment was going to surge to 20 percent. That’s a very bold and very bearish call. According to the Congressional Research Service, the maximum unemployment rate in 2020 topped out at 14.8 percent in April.

Kaplan made the 20 percent unemployment prediction on Fox Business with Maria Bartiromo, the cable TV show, on May 1. When the interview started, around 8:34 a.m. ET, Dow Futures were down 450 points. By the time Kaplan finished speaking, Dow Futures had dropped another 10 points. You can watch the program here. In addition to the 20 percent unemployment prediction, Kaplan also described the economic outlook in the interview as an “historic contraction,” “very severe,” and noted that the consumer (which represents two-thirds of GDP growth in the U.S.) had “suffered a body blow.” Throwing a little more anxiety into viewers’ minds, Kaplan predicted disinflation for both 2020 and 2021. (It should be noted that it’s inflation worries that are making headlines today.)

Five days later, on May 6, Kaplan repeated the 20 percent unemployment prediction in an interview on Yahoo! Finance. You can read the video transcript here.

The financial disclosure forms for all 12 of the regional Federal Reserve Banks instruct the filer to list the month, day and year of each purchase and sell of a security or asset. All of the other Federal Reserve Bank presidents followed that rule in 2020. Kaplan lists no dates for any stock purchase or sell or dates for any of his S&P 500 transactions, which were all “over $1 million.” In all cases, he simply uses the word “multiple” instead of providing dates.

We have brought this impropriety to the attention of the Dallas Fed and asked to receive the actual dates of Kaplan’s transactions. Thus far, the Dallas Fed has failed to provide us with the required information, some of which is more than five years overdue to the public.

You can review Kaplan’s 2015 through 2020 financial disclosure forms here.

Kaplan previously worked for 22 years at one of the most sophisticated trading firms on the globe, Goldman Sachs. He rose to the rank of Vice Chairman at Goldman Sachs and had “global responsibility for the firm’s Investment Banking and Investment Management Divisions,” according to his official bio at the Dallas Fed.

The nature of Kaplan’s career at Goldman Sachs meant that he was an expert on what moves markets. Nonetheless, he regularly gave market-moving predictions to media outlets during a time of market chaos.

Kaplan was also trading in and out of oil stocks in 2020, including shares of Chevron, Marathon Petroleum, Occidental Petroleum and Valero Energy. According to Kaplan’s financial disclosure form for 2020, he made “multiple” trades in each of these oil stocks in sums of “over $1 million.”

On May 28, 2020, Kaplan gave an interview to Reuters news wire which generated a headline that he was predicting “a global oil glut lasting well into 2021.” He also made the bearish comment in the interview that many smaller firms and those with lots of debt may not survive.

West Texas Intermediate (WTI), the U.S. domestic crude oil that trades, had collapsed from a price of $60 a barrel at the beginning of 2020 to a range of $30 at the time of the Reuters’ interview with Kaplan. Calling for a “global oil glut lasting well into 2021” was not a bullish call for the oil fields in Texas. WTI actually bounced back to its $60 handle in early April of this year. It has traded in the $70 range this month.

Because of the numerous bearish calls that Kaplan made to the media in 2020; given his unprecedented trading activity; given his failure to report the dates of his trades as required by the rules of the Fed banks; and given the Dallas Fed’s refusal to say if he was shorting markets, it is imperative for the U.S. Department of Justice to conduct a thorough investigation of this matter and report its findings in a timely fashion. The already withering confidence of the American people in the U.S. central bank hangs in the balance.

A sampling of market-moving statements made by Kaplan in 2020 appears in the chart below. 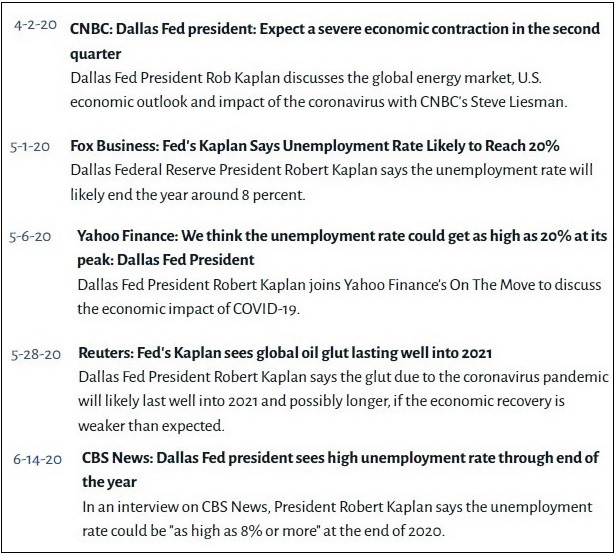