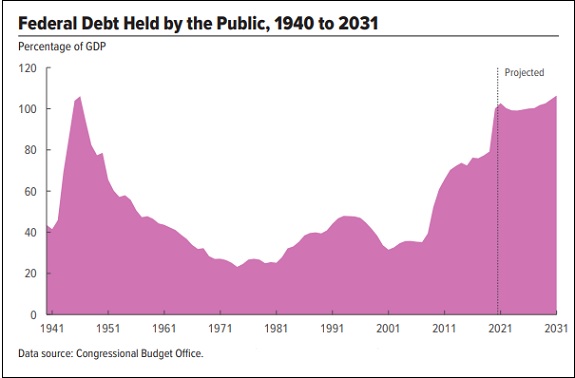 The most recent Congressional Budget Office (CBO) forecast is projecting government debt levels in the U.S. not seen since World War II. According to a CBO report released on July 21:

As for the federal budget deficit as a share of GDP, things aren’t looking good there either according to CBO forecasts:

“CBO projects a federal budget deficit of $3.0 trillion in 2021 as the economic disruption caused by the 2020–2021 coronavirus pandemic and the legislation enacted in response continue to boost the deficit (which was large by historical standards even before the pandemic). At 13.4 percent of gross domestic product (GDP), the deficit in 2021 would be the second largest since 1945, exceeded only by the 14.9 percent shortfall recorded last year.”

Growing levels of national debt and deficits are never good news but they are particularly troublesome when the rosy forecasts for GDP growth this year have started to dim as a result of the economic hit coming from the upsurge in the Delta variant of COVID-19.

On August 19, Goldman Sachs reduced their GDP estimate for the third quarter from a robust 9 percent to 5.5 percent. Goldman Sachs cited Delta’s impact on reduced consumer spending on “dining, travel, and some other services” as the reason for their sharp cut of 3.5 points from their earlier GDP forecast.

The growth trend in the U.S. has had a spate of bad news recently. The Census Bureau reported on August 17 that retail sales had dipped 1.1 percent in July versus the prior month, the second month-over-month decline in the past three months.

At the same time the U.S. is witnessing a downward trend in economic activity, there is a stark, rising trend in corporate debt levels in the U.S. According to Federal Reserve data, as of January 1, 2021 corporate debt (including debt securities and loans) stood at an historic high of $11.169 trillion. (This excludes debt held by financial institutions.) 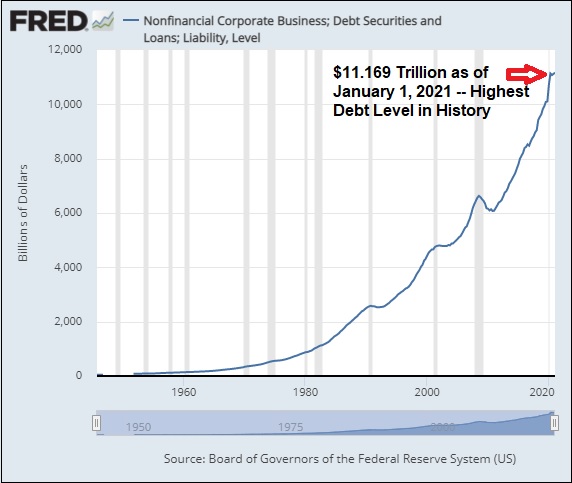