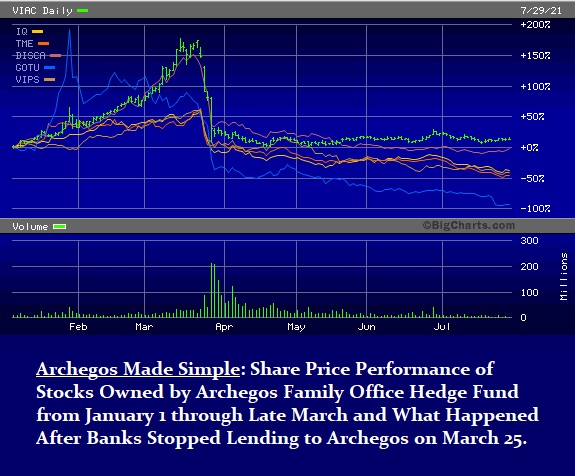 The Swiss mega bank, Credit Suisse, lost $5.5 billion in late March and early April from the highly-leveraged, highly concentrated stock positions it was financing via tricked-up derivatives for Archegos Capital Management, the family office hedge fund of Sung Kook “Bill” Hwang. Archegos blew up on March 25 after it defaulted on its margin calls from its banks. U.S. mega banks, Goldman Sachs and Morgan Stanley, were also extending high levels of margin debt to Archegos at the time of its blowup, as were other foreign banks. Over $10 billion in total losses have thus far been acknowledged by the banks.

To get out in front of an ongoing Department of Justice investigation of the matter, Credit Suisse decided to hire the BigLaw firm, Paul, Weiss, Rifkind, Wharton & Garrison,  to conduct an investigation. Yesterday, Paul Weiss issued a 165-page report on its version of what happened. Paul Weiss found no fraud had occurred — just zombie risk managers at Credit Suisse that were incapable of seeing a train wreck bearing down on them. (We’re not sure how that finding is supposed to “limit legal and reputational exposure,” which is how Paul Weiss touts its internal investigation services.)

Credit Suisse is calling this an “independent” report (notwithstanding the fact that money obviously changed hands between Credit Suisse and Paul Weiss). To impress upon federal prosecutors that this report is the full skinny on everything that went down (nothing more to see here), Paul Weiss stresses that it conducted “interviews with more than 80 employees and the collection of over 10 million documents.”

Rather than being reassuring, the mention of 10 million documents suggests that there was an insane level of transactions taking place between Archegos and Credit Suisse. Perhaps there is a lot more to see here.

This is how the Paul Weiss report portrayed the zombie risk managers at Credit Suisse:

“The Archegos-related losses sustained by CS [Credit Suisse] are the result of a fundamental failure of management and controls in CS’s Investment Bank and, specifically, in its Prime Services business. The business was focused on maximizing short-term profits and failed to rein in and, indeed, enabled Archegos’s voracious risk-taking. There were numerous warning signals—including large, persistent limit breaches — indicating that Archegos’s concentrated, volatile, and severely under-margined swap positions posed potentially catastrophic risk to CS. Yet the business, from the in-business risk managers to the Global Head of Equities, as well as the risk function, failed to heed these signs, despite evidence that some individuals did raise concerns appropriately.”

“…a Prime Services business with a lackadaisical attitude towards risk and risk discipline; a lack of accountability for risk failures; risk systems that identified acute risks, which were systematically ignored by business and risk personnel; and a cultural unwillingness to engage in challenging discussions or to escalate matters posing grave economic and reputational risk. The Archegos matter directly calls into question the competence of the business and risk personnel who had all the information necessary to appreciate the magnitude and urgency of the Archegos risks, but failed at multiple junctures to take decisive and urgent action to address them.”

We had a sense of déjà vu as we read the above. It sounds uncannily like the U.S. Senate’s Permanent Subcommittee on Investigations’ findings as to how JPMorgan Chase dodged risk limits and lost more than $6 billion using bank depositors’ money to make high risk derivative trades in the London Whale scandal of 2012. That 300-page report found the following:

“In the first three months of 2012, when the CIO [Chief Investment Office] breached all five of the major risk limits on the Synthetic Credit Portfolio, rather than divest itself of risky positions, JPMorgan Chase disregarded the warning signals and downplayed the SCP’s risk by allowing the CIO to raise the limits, change its risk evaluation models, and continue trading despite the red flags.”

The big difference between what JPMorgan was doing and what Credit Suisse was doing is that JPMorgan was conducting these derivative trades out of its federally-insured bank using depositors’ money. According to Credit Suisse’s most recent living will (its report on how it would unwind itself if it became insolvent) its U.S. branch “is not a member of, and its deposits are not insured by, the FDIC.” That doesn’t, however, mean that Americans can breathe easy. All of the mega global banks are interconnected by serving as counterparties to each other’s vast derivative contracts. If any one of them becomes insolvent, there is a certainty of contagion to the other banks – thus the need for Congress to do its job and break up these mega banks, separating federally-insured banks from the serially-charged trading casinos on Wall Street.

There is the question as to whether the selection of Paul Weiss to conduct the investigation and write the report was the most prudent avenue for the Board of Directors of Credit Suisse. (See Judge Issues Scathing Rebuke of DOJ and Law Firm, Paul Weiss and The Untold Story of the Paul Weiss Internal Investigation that Didn’t Catch a Massive Stock Fraud.)

According to the Wall Street Journal, the Chairman of Paul Weiss, Brad Karp, “oversaw the investigation” for Credit Suisse. Karp is notable for how many times he has gotten the recidivist mega bank, Citigroup, out of fraud charges. That hasn’t worked out too well for Americans either. See Citigroup’s rap sheet here.

As for whether the U.S. Department of Justice might take a different view from that of Paul Weiss as to whether there was fraud involved in the Archegos matter, a few things stand out.

One key issue is the matter of how much in margin loans a broker-dealer is legally allowed to provide for stock trades in the United States. According to the Paul Weiss report, on some of its stock trades, Archegos was putting up just 7.5 percent and Credit Suisse was providing a margin loan for the balance – that is, a loan of 92.5 percent versus collateral of 7.5 percent. These stock trades were dressed up as derivative swaps but there is the overarching question as to whether this is legal under the Federal Reserve’s Regulation T, which is codified into law as 12 CFR § 220.12. Under the longstanding interpretation of Regulation T, initial margin for a stock trade must be at least 50 percent of the purchase price of the stock. That’s a far cry from 7.5 percent.

Then there is the question surrounding Archegos potential violation of the 5 percent ownership rule with the assistance of its bank lenders. According to a report in the New York Times, Archegos and Bill Hwang owned “$20 billion in shares of ViacomCBS, effectively making him the media company’s single largest institutional shareholder. But few knew about his total exposure, since the shares were mostly held through complex financial instruments, called derivatives, created by the banks.”

The Times’ report indicated that the $20 billion value held by Archegos in ViacomCBS shares occurred “mid March.” We calculated an average price for ViacomCBS between March 15 and March 19 of $96, which would mean that Archegos owned 208,333,333 shares of ViacomCBS. According to the April 2 proxy filing for ViacomCBS, as of March 26 it had 605,267,057 Class B shares outstanding. That meant that Archegos secretly owned a stunning 34 percent of the outstanding shares of ViacomCBS, without its Board or public investors being the wiser.

Under Securities and Exchange Commission regulations, when an individual or other entity acquires 5 percent or more of a company’s stock, they have to make a public filing with the SEC. But no such filing was made by Archegos or Bill Hwang for ViacomCBS. This denied the company and other investors the material disclosure that a man previously charged by the SEC with insider trading and manipulating stock prices was the force behind the runup in the share price of ViacomCBS. (Other stocks reported to be owned by Archegos included U.S. TV channel operator Discovery; Chinese Internet company Baidu; Chinese online-tutoring company GSX Techedu, now renamed Gaotu Techedu; Chinese online discount store VIPShop Holdings; Chinese video site iQIYI; luxury-goods online retailer Farfetch; and streaming company Tencent Music Entertainment, as well as potentially others.)

When it comes to ViacomCBS, a component of the S&P 500 Index, the public needs answers from the Justice Department as to why this man and this hedge fund had selected that particular stock to manipulate and why these highly sophisticated mega banks were looking the other way as he amassed a huge position in this stock. Not only were the banks looking the other way but they were providing highly questionable margin loans to further whatever agenda he had.

The chart above shows what happened to the prices of the stocks held by Archegos after the banks stopped providing those obscene margin loans at the end of March and began liquidating Hwang’s positions. Add this chart to the statement in the Paul Weiss report that Credit Suisse allowed Hwang to withdraw “$2.4 billion between March 11 and 19, 2021,” despite knowing that he actually owed them more margin, and we can safely say that there is plenty left for the Justice Department to investigate.