Florida Condo Collapse: Nobody Told Homeowners that their Building Was Sinking “at an Alarming Rate” 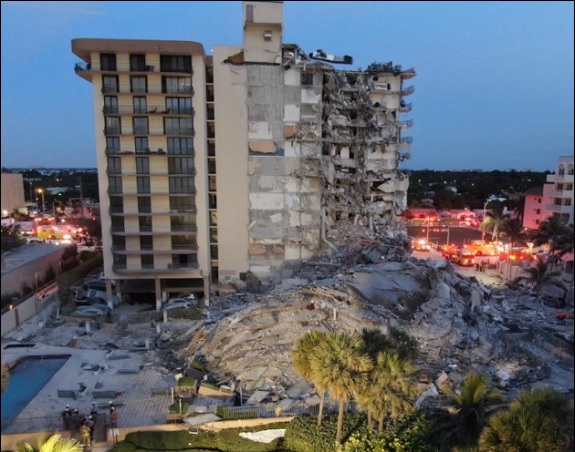 Surfside is a town just north of Miami Beach, Florida. It was incorporated in 1935. At approximately 1:23 a.m. yesterday, part of a 12-story high-rise collapsed in the town leaving 99 people missing and four confirmed deaths as of early this morning. The condo building is known as Champlain Towers South and is located at 8777 Collins Ave. in Surfside.

A report in USA Today has now left the whole town of Surfside on edge. According to the report, Shimon Wdowinski, a professor in the Department of Earth and Environment at Florida International University, co-published a study with Simone Fiaschi in April of last year that found that the condo building “had some kind of unusual movement,” and had been sinking at the rate of 2 mm per year during the course of the study, which looked at satellite data from 1993 to 1999.

Unfortunately, the researchers do not appear to have brought their findings to the attention of town officials or residents. USA Today reports the following:

“Wdownski said he doesn’t believe anybody in the city or state government would have had a reason to be aware of the findings of the study. The bulk of it focused on potential flooding hazards, not engineering concerns.”

The part of the report referencing the building reads as follows:

“Miami Beach is a densely populated barrier island, located between Biscayne Bay and the Atlantic Ocean. It is roughly 10 km long and 2.5 km wide at its widest point…

“In some locations, as in the eastern part of the city, the detected subsidence [gradual sinking of landforms] is of a 12-story high condominium building. The detected subsidence rate is in the 1–3 mm/yr range, with uncertainty level of 0.6–0.8 mm/yr. Although higher subsidence velocities up to 3.8 mm/yr are registered in the artificial islands located west of the city, phase unwrapping errors leading to higher uncertainties cannot be excluded in such areas.”

The obvious question now is, what happened to that high-rise condominium building and others around it since the last satellite images of 1999 were studied. Twenty-two years and multiple episodes of flooding and hurricanes have occurred since that time.

This latest tragedy is just one more example among hundreds that the U.S. lacks an adequate inspection regimen for residential housing.

On September 13, 2018, 8600 customers of Columbia Gas in the towns of Lawrence, Andover, and North Andover, Massachusetts were ordered from their homes as more than 60 area homes erupted in flames and at least three exploded from over-pressurization of a gas line. Columbia Gas had acknowledged in a video announcing its modernization plans for the towns that the gas pipes in the area were heavily corroded. One death occurred and at least 25 people were injured.

The State of Connecticut also has its own nightmare with residential homes. Since 2015 hundreds of homeowners have reported that their concrete basements are collapsing. FEMA issued a report in February with the following findings:

“As many as 34,000 homes constructed in northeastern Connecticut between 1983 and 2000 may have concrete foundations containing pyrrhotite and are at risk of cracking or crumbling…

“Reports of crumbling foundations first began in 2015. By May 2017, the Connecticut Department of Consumer Protection (CDCP) had received reports of more than 550 homes with faulty foundations, and in December 2017 began processing 522 verified reports to determine compensation eligibility.

“Collectively, the potential economic impact to the Connecticut’s housing market could approach up to $1 billion. This issue is also devastating to individual homeowners, whose home values decrease significantly if pyrrhotite is present. Potentially, tens of thousands of Connecticut residents may be affected as the quarry believed to be the source of the contaminated material was widely used throughout the state.

“The only safe and effective method to fix a home that has tested positive for pyrrhotite is to lift the house off the existing foundation and completely replace all the concrete. According to the Connecticut Department of Housing, this process can cost anywhere from $100,000 to $250,000, often more than the total value of many affected homes.”

Ironically, just one day before the Surfside condo collapse, where 99 human beings remain buried under collapsed rubble, the U.S. Senate announced it had finally reached a bi-partisan agreement to move forward on a plan to repair the nation’s crumbling infrastructure.