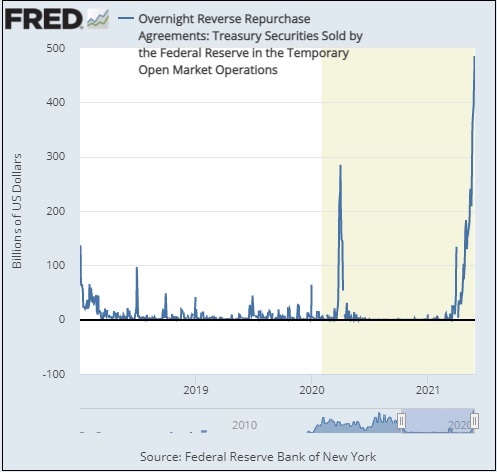 The chart above has been compiled by the St. Louis Fed using the New York Fed’s data for its issuance of Reverse Repurchase Agreements, otherwise known as Reverse Repos. What’s a Fed Reverse Repo? According to the New York Fed, it is when counterparties loan the Fed money in exchange for collateral, which is typically Treasury bills.

In the most recent action, we’re talking about the New York Fed, acting on behalf of the Federal Reserve, selling U.S. Treasuries to Wall Street banks, trading houses, mutual funds and government-sponsored enterprises in overnight and weekend deals and paying zero or next to zero as an interest rate when it buys back the securities.

Why would the smartest guys on Wall Street, who never let a loose dime slip through their fingers in order to get a larger cut of the annual bonus pool, be willing to loan the Fed money at zero percent interest? These are, after all, some of the same guys making 10-to-1 margin loans to dodgy family office hedge funds like Archegos in order to maximize fee income.

Everyone across Wall Street seems to have their own idea of what has caused Reverse Repos at the New York Fed to skyrocket during the month of May. One of the frequently expressed theories is that there’s a surplus of cash swashing around Wall Street as a result of the $1.9 trillion stimulus bill passed by Congress in March and the attendant surge in deposits into banks and money market funds.

There’s a problem, however, with that thesis. According to the New York Fed’s Excel spreadsheet of its daily Reverse Repos, the dollar amounts went from a low of $3.45 billion on April 5 – the month after the stimulus bill was passed and stimulus checks went out – to a high of $173 billion on April 30.

The gargantuan surge in the Fed’s Reverse Repos occurred in May, not April, and has continued into the first days of June. During the last week of May, the Fed’s overnight Reverse Repos ranged from $369 billion on May 21 to an all-time historic high of $485 billion on May 27. In the case of the May 21 Reverse Repo, which fell on a Friday, that deal was not an overnight operation but lasted throughout the weekend, maturing on Monday, May 24. The counterparties who took Treasury collateral from the Fed and loaned it $369 billion for the weekend, earned zero interest according to the data at the New York Fed.

Since Treasury money market funds, that so many corporations and institutions are flocking to, typically cannot hold anything longer than a one-year instrument, there may be a surge in demand to get one’s hands on one-year Treasury bills.

Whatever is causing the rising fear on Wall Street, there is no question that the fear is spreading to more firms that do business with the New York Fed.

The Fed’s minutes for its Federal Open Market Committee (FOMC) meeting of March 16-17 reflect a significant amount of discussion about the Reverse Repo operations of the Fed. One directive coming out of that discussion, according to the minutes, was for the New York Fed to:

Prior to the March FOMC meeting, the per-counterparty limit on Reverse Repos had been $30 billion.

We reached out to the Fed yesterday, giving it the opportunity to cite its own reasons for this historic surge in the Fed’s Reverse Repo activity. It courteously provided us a link to its data pages, which, of course, we already had.

As you may recall, there was another unprecedented surge in Fed activity, beginning on September 17, 2019. At that time, money was moving in the opposite direction with the Fed loaning hundreds of billions of dollars a week in Repo loans (rather than Reverse Repo loans) to its 24 Wall Street primary dealers – who just also happen to be the largest trading houses on Wall Street.

Between September 18 and October 7 of 2019, these were the headlines running at Wall Street On Parade:

Fed Says It Will Offer $310 Billion More in Term Loans to Wall Street as Over 68,000 Job Cuts Planned at Mega Banks

There’s Nothing Normal About the Fed Pumping Hundreds of Billions Weekly to Unnamed Banks on Wall Street: “Somebody’s Got a Problem”

JPMorgan Chase Has a Pattern of Criminality; Now Wall Street Is Pointing to the Bank as a Cause of the Fed’s Emergency Loans

The Fed Intervened in Overnight Lending for First Time Since the Crash. Why It Matters to You.

The one point on which everyone seems to agree is that the Fed has inserted itself far too deeply into the markets and will have one helluva time detaching itself without causing a major market upheaval.