On Tuesday, March 30, Senator Elizabeth Warren provided the following statement to CNBC regarding the blowup of the Archegos Capital Management hedge fund.

“Archegos’ meltdown had all the makings of a dangerous situation — largely unregulated hedge fund, opaque derivatives, trading in private dark pools, high leverage, and a trader who wriggled out of the SEC’s enforcement.”

All of the elements of that statement were well known at that point, except one. No one in mainstream media at that time, or since, was talking about Wall Street’s Dark Pools in connection with the implosion of Archegos. (Dark Pools are opaque, thinly regulated trading platforms that function much like private stock exchanges operating inside the biggest banks on Wall Street. Through some twisted reasoning by the SEC, the banks are even allowed to trade shares of their own bank’s stock.)

Warren is a member of the Senate Banking Committee and would be privy to any regulatory briefings that might have occurred on the implosion of the highly leveraged Archegos hedge fund that has thus far produced acknowledged losses of at least $8 billion among Global Systemically Important Banks (GSIBs).

The Senate Banking Committee has called a hearing for May 26 and will be hauling the CEOs of the six largest banks on Wall Street to testify. (Curiously, the topics to be covered have yet to be announced.) All of the banks called to testify own their own Dark Pools except for Wells Fargo, which shuttered its Dark Pool in 2014. In addition to owning their own Dark Pools, four firms have teamed up to jointly own the Dark Pool known as EBXL Level ATS. (ATS is an acronym for Alternative  Trading System which is the polite phrasing that the SEC prefers for Dark Pools.) The joint owners of EBXL Level ATS are Credit Suisse, Citigroup, Merrill Lynch (part of Bank of America) and Fidelity.

The CEOs that have been called to the May 26 hearing are: Jamie Dimon of JPMorgan Chase; David Solomon of Goldman Sachs; Jane Fraser of Citigroup; James Gorman of Morgan Stanley; Brian Moynihan of Bank of America; and Charles Scharf of Wells Fargo.

We decided to take a look at the Dark Pool trading data (that is provided on a delayed basis and lumped into a full week total) by Wall Street’s chummy self-regulator, FINRA. It shows that one of the largest stock holdings of Archegos, ViacomCBS Class B common stock, had an average weekly trading volume of 11.4 million shares in the seven weeks leading up to the week of March 22, 2021 – the week in which Archegos exploded. That week, when Archegos could not meet its margin calls, the Wall Street banks that had made highly-leveraged loans to Archegos against the ViacomCBS stock as collateral, began panic selling ViacomCBS.

For the week of March 22, the week that Archegos blew up, Dark Pool trading in ViacomCBS exploded from the prior seven-week average of 11.4 million shares to 70.65 million shares, an increase of 517 percent.

Equally titillating, for the week of March 22, the top three Dark Pools in terms of trading volume in ViacomCBS are three that are owned by banks known to have been involved with providing leverage to Archegos: UBS, Credit Suisse’s Crossfinder, and Goldman Sachs’ Sigma X2.

For the week of March 22, UBS’ Dark Pool traded 15 million shares of ViacomCBS, representing 21 percent of all ViacomCBS shares traded that week by Dark Pools. That volume derived from 89,841 separate trades. Given that Morgan Stanley belatedly reported its loss of $911 million related to Archegos, it’s possible that UBS might have something to say in that same regard when it reports earnings on April 27.

The number two Dark Pool in terms of volume for the week of March 22 in ViacomCBS Class B was Credit Suisse’s Crossfinder, which traded 13.8 million shares in 40,565 separate trades. Credit Suisse has announced that its Archegos loss amounts to a staggering $4.7 billion.

Goldman Sachs, which has not reported a loss from Archegos, reported to FINRA that its Dark Pool, Sigma X2, traded more than 5 million shares of ViacomCBS Class B in 41,867 separate trades during the week of March 22. (See FINRA data below.)

According to reporting in the New York Times, Archegos held a stunning $20 billion in shares of ViacomCBS. According to our rough estimate, by the middle of March that $20 billion amounted to approximately 208 million shares of ViacomCBS Class B, or an unfathomable 34 percent of the total outstanding shares. But because the global banks were claiming technical ownership of the shares for reporting purposes through a tricked-up derivatives contract, Archegos was able to avoid making SEC filings that would have alerted both public investors and ViacomCBS itself that a hedge fund had acquired this huge stake.

The question now becomes, did the Wall Street banks’ Dark Pools secretly acquire the ViacomCBS shares for Archegos as well as dump the shares when it couldn’t meet its margin calls?

Let’s hope that the Senate Banking hearing on May 26 brings some much needed transparency to the dystopian market structure of today’s Wall Street. 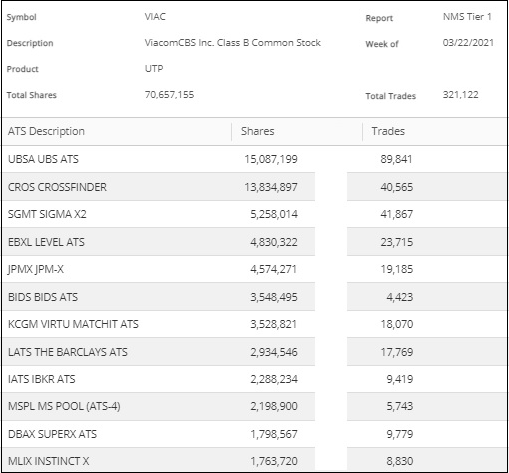