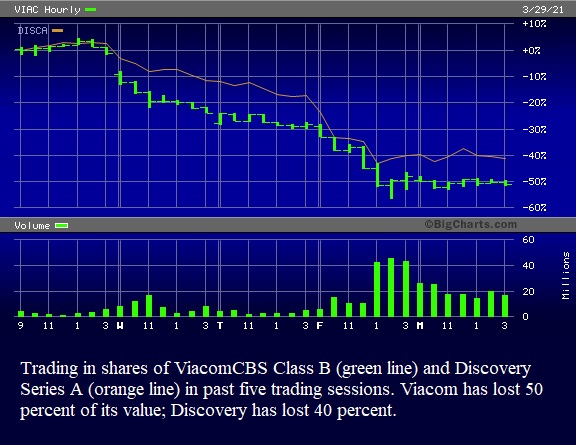 The Archegos Capital Management hedge fund implosion has, thus far, delivered billions of dollars in losses to the shareholders of global banks Credit Suisse and Nomura, whose market values have plummeted; done serious reputational damage to Goldman Sachs and Morgan Stanley, both of whom are allowed to own federally-insured banks even after they came close to blowing themselves up in 2008 and surely would have without gargantuan secret bailouts from the Federal Reserve; cut the market value of ViacomCBS in half; dropped the market value of Discovery by 40 percent; shaved billions of dollars off the market value of major Wall Street banks yesterday as rumors ran wild about who is hiding losses; and raised critical questions, once again, about the competency of the Federal Reserve to supervise these federally-insured trading casinos.

The Archegos meltdown has done one more thing. It has reminded the readers of Wall Street On Parade that our decade of hand-wringing over the dangerous brew of allowing federally-insured, deposit-taking banks to own tens of trillions of dollars in opaque, over-the-counter derivatives remains the biggest threat to the financial stability of the United States.

What has been pieced together thus far, and not denied by any of the parties involved, is as follows:

After pleading guilty to wire fraud involving insider trading in 2012 on behalf of another hedge fund he founded, Sung Kook “Bill” Hwang sometime thereafter quietly founded a “family office,” a hedge fund that is allowed to decide for itself if it needs to register with the Securities and Exchange Commission. There are no filings with the SEC to suggest it knows Archegos exists or how it operates and there are no 13-F filings with the SEC to show the dangerous levels of stock exposure and leverage it had amassed through derivatives contracts with some of the biggest banks on Wall Street. This, of course, raises the question as to just how much of this booming stock market is based on secret derivative contracts between dodgy hedge funds and federally-insured banks.

Bloomberg News reported yesterday that Archegos may have leveraged $5 to $10 billion in assets up to $50 billion in exposure. Instead of buying stock outright or buying stock options on exchanges, according to Bloomberg News and other media outlets, Archegos was using private derivative contracts (over-the-counter) to obtain tens of billions of dollars in stock exposure. A big chunk of that exposure was in shares of ViacomCBS and Discovery as well as Chinese tech stocks. As those positions had to be unwound as Archegos was unable to meet margin calls, ViacomCBS tanked over 50 percent with Discovery down more than 40 percent. (See chart above.)

According to the Financial Times, the five global banks known thus far to have supplied leverage to Archegos are Goldman Sachs, Morgan Stanley, Credit Suisse, Nomura and UBS. The Wall Street Journal reports that Deutsche Bank was also involved in dumping stock related to Archegos’ holdings.

“A significant US-based hedge fund defaulted on margin calls made last week by Credit Suisse and certain other banks. Following the failure of the fund to meet these margin commitments, Credit Suisse and a number of other banks are in the process of exiting these positions. While at this time it is premature to quantify the exact size of the loss resulting from this exit, it could be highly significant and material to our first quarter results, notwithstanding the positive trends announced in our trading statement earlier this month. We intend to provide an update on this matter in due course.”

As of 8:30 this morning, Goldman Sachs, Morgan Stanley and UBS have not publicly commented on any potential losses to their respective firms.

By the close of trading yesterday in New York, Nomura had lost 14.07 percent of its market value; Credit Suisse notched a loss of 11.5 percent; Deutsche Bank was down 3.24 percent; Morgan Stanley had lost 2.63 percent. Goldman Sachs, after anonymously leaking to the media that its losses would likely be “immaterial,” closed yesterday with a loss of just 0.51 percent.

The number of shares traded in ViacomCBS Class B in the past four trading sessions suggests that there are a lot more undisclosed losses out there.

ViacomCBS Class B typically trades about 27 million shares a day. But the volume in the stock over the past few trading sessions grew to 8 times that amount as the share price logged staggering losses. On Wednesday, ViacomCBS’ share volume was 89.8 million; Thursday it traded 44.2 million shares; Friday’s volume spiked to 216.6 million shares while Monday’s volume reached 213.57 million shares.

Making the situation even more striking, the prospectus filed with the SEC by ViacomCBS for a secondary offering last week to sell approximately $1.67 billion of its Class B common stock and approximately $1 billion of its Series A Mandatory Convertible Preferred stock, had six Joint Book-Running Managers, two of which include – wait for it – Morgan Stanley (listed as number one) and Goldman Sachs (listed as number four). The underwriters priced the common stock at $85 a share. The press release for the deal said it was expected to close last Friday, March 26. That’s the day that the stock traded in the open market at a high of $66.27 and a low of $39.81 and Morgan Stanley and Goldman Sachs were dumping shares of ViacomCBS because of their involvement with the highly leveraged hedge fund, Archegos Capital Management.