The Fed Has a Problem: Yields Have Doubled on the 10-Year Treasury in Six Months, Despite the Fed Buying $400 Billion in Treasury Securities 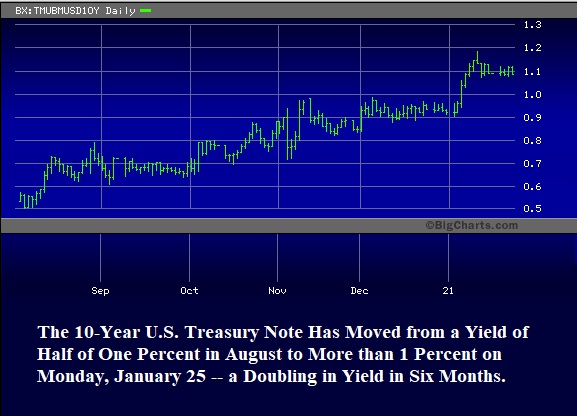 The chart above reminded us of what happened in the London Whale saga at JPMorgan Chase. The London derivatives traders at JPMorgan Chase were making such huge bets in a specific credit index that they effectively became the market with no escape route to unwind their losing trades. The bank had, insanely, used customer deposits to make those wild bets and ended up losing at least $6.2 billion.

Since August 6 of last year, the Fed has purchased $400 billion of U.S. Treasury notes and bonds. Despite that massive amount of propping up the market, the yield on the 10-year Treasury has more than doubled, from half of one percent to a yield of 1.05 percent at 7:30 a.m. this morning. That means that all of those billions of dollars in Treasuries that the Fed bought at lower yields are now trading at losses.

On September 16 of last year, one day before the repo market blew up and forced the Fed to intervene for the first time since the Wall Street crash of 2008, the Fed authorized the New York Fed to release a statement indicating that it would continue to purchase Treasury securities at a rate of “approximately $80 billion per month” but would also be allowed to purchase “additional amounts…as needed to sustain smooth functioning of markets for these securities.”

That statement should be interpreted as “the Fed will do whatever it takes to push interest rates down to prevent the trillions of dollars in derivative bets at the mega banks from blowing up, taking down the banks, and forcing an even greater expansion of the Fed’s balance sheet from bank bailouts.”

Last March we reported the following:

“According to the U.S. Treasury, as of February 29, 2020, there was $16.9 trillion in marketable U.S. Treasury securities outstanding. Of that amount, at the end of February, the Federal Reserve held $2.47 trillion or 14.6 percent – making it, by far, the largest single holder of U.S. Treasuries anywhere in the world.”

This is not a good trend and both Treasury yields and the prices of bank stocks are starting to reflect misgivings. 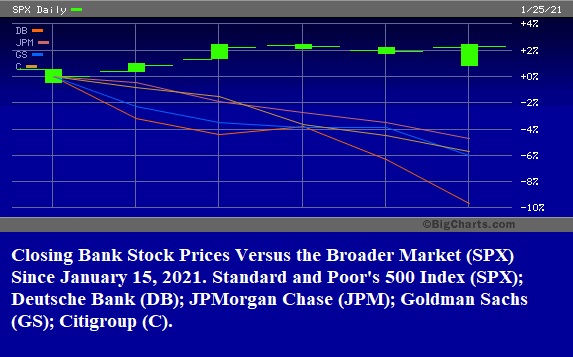