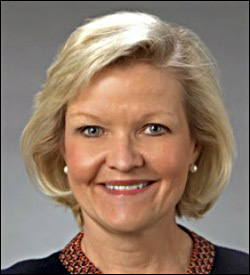 Last Saturday, the sitting President of the United States, Donald Trump, called the Secretary of State of Georgia, Brad Raffensperger, and told him this: “I only need 11,000 votes. Fellas, I need 11,000 votes. Give me a break.” The Washington Post has posted the audio of the call. That phone call has come under withering criticism as an attempt to coerce votes from a state Trump lost in the November 3 election.

Among those on the call as an apparent advisor to Trump was attorney Cleta Mitchell, who at no point suggested to Trump that what he was saying might be illegal. Mitchell is a long-time law partner at Foley & Lardner, which is now attempting to distance itself from the mess. The law firm released a statement which coyly stated: “We are aware of, and are concerned by, Ms. Mitchell’s participation in the January 2 conference call and are working to understand her involvement more thoroughly.” Seriously?

In reality, both Mitchell and Foley & Lardner have been variously advancing, and mopping up for front groups working to advance the agenda of the fossil fuels conglomerate, Koch Industries, for a very long time — in lockstep. Koch Industries has played an outsized role in setting the agenda for the Trump administration, so Mitchell’s presence on the Saturday phone call should not be that hard for her law firm to comprehend.

The Chairman, CEO and a major shareholder of the privately-owned Koch Industries is billionaire Charles Koch, who has spent the last 40 years using front groups to promote his anti-regulatory agenda. This labyrinthine maze of front groups and its dark money funders are frequently referred to as the Koctopus.

Cleta Mitchell has been in our radar since 2011 when we confirmed with Scott Markley, a Public Information Specialist at the U.S. Supreme Court, that Justice Clarence Thomas had been wined and dined at the private Vintage Club in Indian Wells, California by Charles Koch and his wife, Elizabeth, in 2008, the same year that the Supreme Court decided to hear the Citizens United case, which would open the flood gates to unlimited corporate money in federal elections.

That Justice Clarence Thomas would take such a meeting with Charles Koch is a blackmark on the integrity of the Supreme Court. Charles Koch at the time sat at the helm of Koch Industries, which had paid tens of millions of dollars to settle violations of Federal and State laws. In 1999, according to 60 Minutes, a jury found that Koch Industries had stolen oil from Federal lands “and lied about its purchases – 24 thousand times.”  Bill Koch, a dissident brother and whistleblower in the case, said profits on that oil were a minimum of $230 million.

The Citizens United decision was handed down on January 21, 2010. Just eight days after Justice Thomas voted in favor of that decision to open the spigots to corporate money in campaigns, Cleta Mitchell made a move that looked very much like a quid pro quo for the wife of Justice Thomas. Mitchell, then a partner at Foley & Lardner, filed an application with the Internal Revenue Service to set up a nonprofit called Liberty Central, Inc. on behalf of Virginia Thomas. According to IRS tax filings, Liberty Central  received a combined $1.478 million from dark money donors in 2009 and 2010.

The nonprofit had the fingerprints of Charles Koch all over it. Acting as General Counsel in 2010 for Liberty Central was a former lawyer for the Charles G. Koch Foundation, Sarah Field. A former Koch lobbyist, Matt Schlapp, served on the Board of Liberty Central at inception.

Mitchell didn’t seem to feel she might have a conflict of interest in setting up a nonprofit that would hand the tidy sum of $120,511 to the wife of a U.S. Supreme Court Justice after Mitchell, herself, had filed an amicus brief in the Citizens United case before the Supreme Court.

Mitchell, herself, was a former lobbyist at the federal level in years 2005 through 2008 for the Alliance for Charitable Reform, a project of The Philanthropy Roundtable, another tax-exempt organization. Donors Trust and Donors Capital Fund, two dark money groups which also have Charles Koch’s fingerprints all over them, were spun off from the Philanthropy Roundtable in 1999. (See our report: Koch Footprints Lead to Secret Slush Fund to Keep Fear Alive.)

Mitchell is listed on Steve Bannon’s charity, Citizens of the American Republic, as an officer of the organization, holding the position of Secretary. Bannon and others were charged in August by the Department of Justice with bilking donors out of hundreds of thousands of dollars through that charity.

This past Sunday, Senator Ron Johnson, a Republican from Wisconsin, appeared in a contentious interview on Meet the Press with host Chuck Todd. Johnson was advocating for Senate hearings on behalf of the millions of people he said believe the election was stolen from Donald Trump. According to the Center for Responsive Politics, lawyers and staff of Foley & Lardner were the third largest donor to Johnson’s campaign committees since 2015. Employees and officials of Koch Industries rank fifth.