Herman Cain, the Kochs and that Creepy Smoking Ad 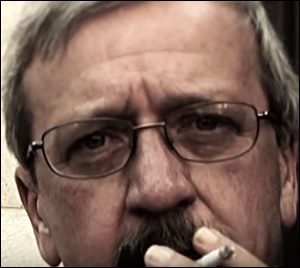 Mark Block, Chief of Staff to Herman Cain During His Presidential Bid, Smokes a Cigarette in Advertisement for Cain’s Campaign 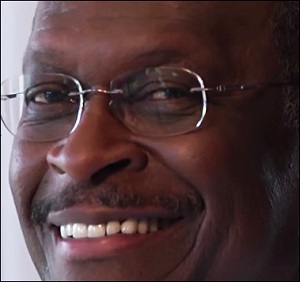 President Donald Trump announced yesterday from the Oval Office that he is recommending Herman Cain for a seat on the Federal Reserve Board of Governors, calling him “a terrific person” and saying “I’ve told my folks that’s the man.” Cain was a presidential contender in the Republican Party in 2011 until sexual harassment charges derailed his bid.

Trump’s announcement came just weeks after Trump proposed Stephen Moore for an additional open seat on the Fed. Both Cain and Moore have had close ties to Americans for Prosperity, a corporate front group tied to the Tea Party movement and created with money from the billionaire Koch brothers, Charles and David. The Koch brothers are majority owners of the fossil fuels conglomerate, Koch Industries.

Scott Keyes, writing for Think Progress in 2011, reported that “Cain held an official position in the Koch-funded group Americans for Prosperity,” which dated back to 2005. Keyes reports that Cain led the organization’s “Prosperity Expansion Project,” which “allowed Cain to barnstorm the country, giving speeches, holding town halls, and sharpening his skills for an eventual presidential bid.”

In Cain’s 2011 autobiography, This Is Herman Cain!: My Journey to the White House, he writes about how he helped to set up state chapters of Americans for Prosperity. (See David Koch’s address to representatives of the state chapters in this video where he admits that he and his brother, Charles, provided the funds to start Americans for Prosperity.) Cain writes in his book:

“My first step after announcing my candidacy [for President] was to assemble my campaign team. I’d known Mark Block, who had been a leader in the Tea Party movement in Wisconsin, for several years. After his appointment six years ago as the Wisconsin state director of Americans for Prosperity, the organization’s president asked me to help them launch some state chapters, so Mark brought me in for an eight-stop, day-and-a-half trip through the state…during the next six months, when Mark was asked to launch branches in Michigan and Ohio and I was asked to help him, I agreed to do so and we ended up spending a lot of time together, much of it in a car, traveling from meeting to meeting.”

Mark Block’s LinkedIn profile indicates that he was Wisconsin State Director for Americans for Prosperity from 2006 through 2010. He then became Chief of Staff to Herman Cain and Chief Operating Officer of his presidential campaign.

Ask any political reporter who covered Cain’s bid for the Republican presidential nomination what stands out in their mind about that campaign and they are likely to say that weird advertisement for Cain where Block takes a deep drag on a cigarette, slowly blows smoke at the camera as “I Am America” plays jubilantly in the background. A creepy, smiling head shot of Cain closes out the ad.

In a Fox News interview after the ad went viral, Megyn Kelly asks Block if he was trying to throw shade on the elites on the East and West Coasts and appeal to the “real people” in America. Block said “if you walk into a veterans’ bar in Iowa and they’re sitting around smoking, yeah, we are resonating with them.”

That may be far too simplistic an explanation. The Koch brothers have a long, clandestine history with tobacco companies through one of their earlier nonprofit front groups, Citizens for a Sound Economy (CSE).

In 2013 the health professionals’ journal, Tobacco Control, published a comprehensive report funded by the National Institute of Health (NIH), a federal agency. The report was titled ‘To Quarterback Behind the Scenes, Third Party Efforts’: The Tobacco Industry and the Tea Party.

The researchers reveal that Citizens for a Sound Economy, which split into Americans for Prosperity and FreedomWorks in 2004, “was co-founded in 1984 by David Koch of Koch Industries, and Richard Fink, former professor of economics at George Mason University, who has worked for Koch Industries since 1990.” According to the report, “CSE supported the agendas of the tobacco and other industries, including oil, chemical, pharmaceutical and telecommunications, and was funded by them.”

The report indicates that between 1991 and 2002, Philip Morris and other tobacco companies gave CSE at least $5.3 million.

CSE was a pure Koch-created organization and considered an integral part of the Philip Morris strategy to thwart federal regulation of cigarettes and second hand smoke. The study shows that Philip Morris designated CSE a “Category A” organization for funding and it was assigned its own Philip Morris senior relationship manager.

Philip Morris and other tobacco companies launched an offensive in 1994 and 1995, using nonprofit front groups including CSE, to undermine the credibility of the Food and Drug Administration (FDA) which was attempting to regulate second-hand smoke. One Philip Morris memo in late 1994 indicated that CSE and other front groups were working “to define the FDA as an agency out of control and one failing to live up to its congressional mandate regarding regulation of drugs and medical devices.”

CSE developed a 15-page strategy document for gutting the FDA’s funding and keeping it under withering media glare – not that dissimilar to what the Trump administration is attempting to do to regulatory watchdogs today and to the climate change debate. (Koch money has been a major funder of climate change denial groups.)

The Justice Department sued the largest tobacco companies in 1999 under the Racketeer Influenced and Corrupt Organizations Act (RICO). The government charged that the tobacco companies engaged in a 40-year conspiracy to mislead the public about the dangers of smoking, distort the dangers of secondhand smoke, and target the youth market as “replacement smokers.” In 2006, following a nine-month trial, Judge Gladys Kessler of the U.S. District Court for the District of Columbia issued a 1,683 page opinion.  The Court found that “Cigarette smoking causes disease, suffering, and death.”

Block’s campaign ad for Cain, taking a deep drag on a cigarette, came five years after that decision was handed down.

In 2004, the Koch-founded Citizens for a Sound Economy split into FreedomWorks and Americans for Prosperity.

Today, the Kochs have another front group called Freedom Partners, which has been responsible for embedding a large number of Koch loyalists in the Trump administration. As of July 2018, eight of the nine members of Freedom Partners’ Board of Directors is a current or former Koch company employee, including the Chair of Freedom Partners, Mark Holden, who simultaneously serves as the General Counsel of Koch Industries.

SourceWatch reported in April of last year that a dozen people who previously worked at Freedom Partners are now working in the Trump administration. Among that group was Marc Short, former Freedom Partners’ President, who became Director of Legislative Affairs for Trump. Short stepped down last year after achieving many of Freedom Partners’ stated demands.

Freedom Partners was responsible for providing the Trump administration with a list of regulations it wanted gutted – like the Paris Climate accord (which Trump revoked on June 1, 2017) and numerous EPA rules – and threatened those lawmakers who didn’t get on board, writing that “Freedom Partners will hold lawmakers who oppose regulatory relief accountable for their positions.”

Also noteworthy, 12 lawyers from the Jones Day corporate law firm headed to important posts in the Trump administration on January 20, 2017 – Trump’s inauguration day. Jones Day had represented Freedom Partners as well as representing Koch Industries’ in its mergers and acquisitions.

Today, the Kochs are more dangerous than ever. They’ve created their own voter database called i360 to micro target voters and, according to the Center for Media and Democracy, “have developed detailed personality profiles on 89 percent of the U.S. population.” (See related articles below.)