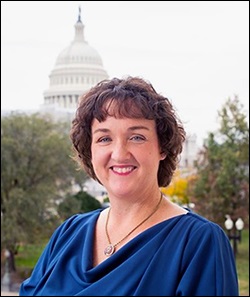 Last Thursday, during the House Financial Services Committee hearing with federal regulators of banks, Congresswoman Katie Porter of California told the Vice Chairman for Supervision of the Federal Reserve, Randal Quarles, that the Fed has a “big problem.” Porter has a Harvard Law degree and was previously a law professor at the University of California Irvine School of Law. If Porter believes the Fed has a legal problem, it is highly likely it does.

Here’s how the exchange between Porter and Quarles went:

Porter: “The Fed is largely responsible for dispensing the $500 billion Congress provided as a bailout for corporate America – the biggest bailout in our country’s history, potentially. Using taxpayer dollars to buy bank debt was never part of that plan. In fact, the Federal Reserve stated explicitly in this document [holds up document] that it would not be purchasing bank debt. What happened?”

Quarles says he doesn’t know what document Porter is holding up. Porter says it’s the Fed’s own “Frequently Asked Questions” on the terms of their corporate bond buying program, which specifically states that the Fed will not be buying the bonds of any “insured depository institution,” i.e., a bank. Here is a link to that document.

Quarles: “I understand the question. We haven’t bought bank debt in those facilities.”

Porter: “Exchange Traded Funds, for everyone who is watching, those are just baskets of stocks [or corporate bonds] issued by a variety of companies. And, is it not correct that the Fed bought $1.3 billion in ETFs.”

Porter: “My question for you is how much of that was bank debt – in the Exchange Traded Funds.”

Quarles: “I can get that information for you. I don’t have the numbers in front of me.”

Porter: “Well, it was a lot…these are companies like JPMorgan Chase, their debt is in there, and it’s a big problem that you did this. A white paper published by the Yale School of Management showed that, in fact, 15 percent of all those ETFs purchased was for big banks…This is a headline from Bloomberg: ‘Despite Stated Exclusion, the Fed Is Buying Bank Debt.’ Would you like to revise your earlier statement…?”

After some back and forth, Porter asks Quarles who is the world’s largest issuer of ETFs. Quarles hesitates and Porter says “BlackRock.” Stating that it “seems beyond belief to me,” Porter then asks Quarles if the Fed hired BlackRock to buy up BlackRock’s own ETF products.

As the bell rings indicating that Porter’s allotment of time for questioning has run out, she holds up a news article from the Wall Street Journal with this bold headline from September 18: “Fed Hires BlackRock to Help Calm Markets. Its ETF Business Wins Big.”

Porter might have been better served with this August 7 headline from Wall Street On Parade: Fed Chair Powell Had 4 Private Phone Calls with BlackRock’s CEO Since March as BlackRock Manages Upwards of $25 Million of Powell’s Personal Money and Lands 3 No-Bid Deals with the Fed.

In any event, it’s nice to know that someone with a Harvard Law degree and the tenacity of a criminal prosecutor has the Fed in her crosshairs.