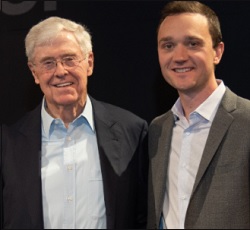 Fossil fuels billionaire Charles Koch, the invisible hand behind the worst instincts of the Trump administration, has launched more deception with an apology tour, a new book and interviews last week with the Washington Post and Wall Street Journal. But the folks who know Koch best are having none of it.

Jane Mayer, author of the 500-page Koch history tome, Dark Money: The Hidden History of the Billionaires Behind the Rise of the Radical Right, fired back on Twitter with this: “Oops says Billionaire Political Donor Charles Koch in new book. He now regrets corrupting American democracy, along with the planet.”

“If there’s a figure who could compete with Mark Zuckerberg for the award of most destructive influence on modern American political life, it would be Charles Koch. He and his late brother, David, are the hard-right, libertarian gazillionaires behind almost every cruel, malign, extreme, divisive campaign that the GOP has run on in recent decades. Anti-regulation. Check. Anti-union. Check. Anti-healthcare. Check. Anti-environment. Check.”

And, of course, there was the spot-on commentary from Vanity Fair’s Bess Levin, who perfectly captured the absurdity of the apology with this: “One of the worst people on earth has characterized his society-ruining mistakes like they’re akin to accidentally hitting someone’s side mirror with your car.” Levin further notes that the apology rings particularly hollow since Koch is “still actively writing giant checks to a party and candidates who won’t acknowledge that Joe Biden won the election, which some people might find kind of divisive-y!”

Not helping Koch’s apology tour is the fact that his outside corporate law firm, Jones Day, which installed 12 of its law partners in the Trump administration on the very day of Trump’s inauguration on January 20, 2017, was one of the law firms recently attempting to advance Trump’s prospects through the courts by stopping the counting of ballots.

Charles Koch is the Chairman and CEO of Koch Industries, one of the largest private corporations in the world with interests in oil refineries, pipelines, chemicals, commodities trading, and technology. In 2005 it bought the paper and lumber company, Georgia-Pacific. Although Koch professes to be all about “free markets,” he immediately de-listed Georgia Pacific from the New York Stock Exchange. The Georgia-Pacific subsidiary is responsible for a raft of consumer products such as: Dixie disposable paper plates, bowls and cups;  Northern Quilted and Angel Soft bath tissue; Brawny and Sparkle paper towels; and its Vanity Fair and Mardi Gras table napkins. That division is currently running ads all over television to, ostensibly, counter the negative image  and boycotts the corporation has garnered across America for its heavy-handed interference in U.S. elections.

Another ploy by Charles Koch was to pretend that he didn’t back Trump for president. But once Trump was in the Oval Office, a Koch machine, then known as Freedom Partners, mapped out the agenda it expected Trump to march to. In a document titled “Roadmap to Repeal: Removing Regulatory Barriers to Opportunity,” the Koch front group listed the laws and regulations it expected to be repealed in the first 100 days of Trump’s administration. The Trump administration dutifully marched to the beat. Repeal the Paris Climate Accord – done. Tax cuts for corporations and the wealthy – done. Gutting federal regulations and the Environmental Protection Agency – done.

By the spring of 2018, 12 people who previously worked at Freedom Partners were working in the Trump administration. Freedom Partners has since disbanded but when we last took a look at the nonprofit in July 2018, we found that all but one of Freedom Partners’ 9-member Board of Directors was a current or former Koch company employee. The Board Chair of Freedom Partners at that time was  the same Mark Holden that was the General Counsel of Koch Industries.

Charles Koch also heads an operation that has variously been known as the Koch Network or the Kochtopus, because its tentacles are strangling the life out of representative government in the United States. The group now cynically calls itself “Stand Together.” This Koch operation hosts semiannual strategy sessions where obscenely rich Americans get together to jointly commit hundreds of millions of dollars to keep Congress and the Oval Office in the hands of candidates who have demonstrated an obedience to a deregulatory agenda for corporations.

In addition, Koch Foundation money and two dark money groups, Donor’s Capital Fund and Donor’s Trust, have pumped hundreds of millions of dollars over the years into a sprawling array of right-wing “news” sites, think tanks and climate change denial groups. More recently, Koch Industries has developed a sophisticated data mining operation that uses artificial intelligence to target voters and gin up elections for candidates of their choice. The company is called i360. (See our report here.)

We have been researching and writing about Charles Koch and his brother David, who died in August of last year, for the past 15 years. In 2010 we broke the story of how Donor’s Capital Fund, the dark money group with Charles Koch’s fingerprints all over it, had donated $17,778,600 to the Clarion Fund to distribute 28 million DVDs of a race-baiting, fear-mongering film just weeks before the 2008 presidential election when the first black candidate in history, Barack Obama, was the Democratic presidential nominee. The DVD was stuffed into the Sunday edition of some of the biggest newspapers in America as well as distributed through a direct mail campaign.

After setting up front groups for decades to foment hate in the country, Koch stated in his Washington Post interview that there is too much hate in the country. But Charles Koch is not just the funder-in-chief of hate in this country, he is the second generation of the dark money hate fomenting machine. The brilliant Lee Fang, who wrote last year at The Intercept about how Koch’s i360 data mining operation had spewed “dehumanizing messages” about immigrants to bolster specific Republican candidates, is also the author of the 2013 book, The Machine: A Field Guide to the Resurgent Right, which traces two generations of hate-mongering by the Koch political machine.

In one passage in the book, Fang reveals how Charles Koch’s father, Fred Koch, used the John Birch Society to smear people as communists. Trump did the exact same thing in a Fox News interview this year shortly after the Vice Presidential debate between Senator Kamala Harris and Vice President Mike Pence. Trump said this about Harris: “She’s a communist. She’s not a socialist. She’s well beyond a socialist. Take a look at her views. She wants to open up the borders to allow killers and murderers and rapists to pour into our country.”

Fang writes this about Fred Koch in his book:

“Fred C. Koch, a hardscrabble Texan of Dutch ancestry, founded the Koch Industries empire and pioneered a strategy for advancing conservatism that was pivotal in shaping the modern American right. He unapologetically attacked his enemies, branding them communists, or worse. He paid for groups to help whip up a grassroots army filled with populist rage against the United Nations, Justice Earl Warren, and President Kennedy. He helped begin the process of evicting moderates from the Republican Party…Fred, a racist who detested the civil rights movement, probably could have never imagined a black president of the United States. But Fred laid the groundwork for his sons to try to tear the first one down.”

“…the Birchers continued to press forward, launching a campaign to impeach Kennedy. They picketed in front of the White House, mobilized massive letter-writing campaigns, and spread the politics of paranoia throughout his presidency. Bircher businessmen sponsored ads and billboards across the country accusing Kennedy of being in league with communists.

“Using a front group called the American Fact-Finding Committee, several wealthy Texas Bircher leaders paid for a full-page ad welcoming Kennedy to Dallas in 1963. ‘Why have you scrapped the Monroe Doctrine in favor of the ‘Spirit of Moscow’? howled the ad, which ran the morning of Kennedy’s assassination.”

Following Kennedy’s death, Fred Koch took out a full-page ad in the New York Times and Washington Post on behalf of the John Birch Society, according to Fang in his book. The ad called Lee Harvey Oswald a communist and said the communists will ‘use the shock, grief, and confusion of the American people, resulting from the assassination of our President, as an opportunity for pushing their own plans faster.’ Fang notes that the columnist, Drew Pearson, wrote this about the subterfuge: “When Kennedy was alive, they accused him of consorting with communists. After he died, they claimed in the ad that he was a martyr to communism.”

If you have not yet tossed your cookies at the hypocrisy of Charles Koch and his apology tour, consider this. On the Koch Industries website, Koch says this about the book, which he has co-authored with the head of Stand Together, Brian Hooks:

“The book’s title, ‘Believe in People,’ is really a summation of my lifelong philosophy. The central point is that every person has a unique gift. Each of us can use our gift to improve our lives by helping others improve theirs. The more we do so, the more everyone will benefit. I have spent the last 60 years in business and philanthropy striving to empower people to become the best version of themselves and contribute to the best possible society.

“Like my previous books, ‘Believe in People’ draws on the principles of scientific and social progress that have benefited people throughout history. Those principles have transformed my life, allowing me to accomplish more than I ever dreamed possible.”

Forbes puts Charles Koch current wealth at $44.9 billion. In 2000, 60 Minutes did a program that helped to explain how some of that wealth had been obtained. One of Charles Koch’s dissident brothers, Bill Koch, had reported the “Koch Method” in court documents. 60 Minutes explained it as follows:

“Bill Koch filed a lawsuit in federal court claiming that much of the oil collected by Koch Industries was stolen from federal lands. At the trial, 50 former Koch gaugers testified against the company, some in video depositions. They said Koch employees had a name for cheating on the measurements.” It was called the Koch Method. “The company used the Koch method with virtually all its customers. In the 1980s alone, Koch records show those so-called adjustments brought the company 300 million gallons of oil it never paid for. And it was pure profit. Bill Koch says that profits from that oil were a minimum of $230 million…In December 1999, the jury found that Koch Industries did steal oil from the public and lied about its purchases – 24 thousand times.”

Notwithstanding that history, the Wall Street Journal allowed Charles Koch to publish an OpEd in 2012, lecturing other corporate leaders on why they must “act lawfully and with integrity.”

The key nonprofit front group that the Koch network works through today is Americans for Prosperity (AFP). In June that group was signaling to Senate Majority Leader Mitch McConnell and Trump that it didn’t want to see any new stimulus bill that might give funds to state and local governments that might  prevent the layoff of union workers, that is, teachers, police and firefighters. It also wrote in its policy statement that it didn’t want to see any moratoriums on “debt collection, consumer credit reporting, evictions, or foreclosures” and definitely not money going to competitors to fossil fuels like “subsidies for wind and solar energy.” You can read about the tentacles of the campaign here and its policy statement here. No second stimulus bill has emerged since the CARES Act in the spring, strongly suggesting that Koch is still cracking the whip.

As millions of Americans face eviction, have no money for Christmas presents for their children, food pantry lines stretch for miles, and the COVID-19 crisis escalates across the country, it’s critical to remember the role that Charles Koch has played in turning much of the U.S. into a heartless kleptocracy.