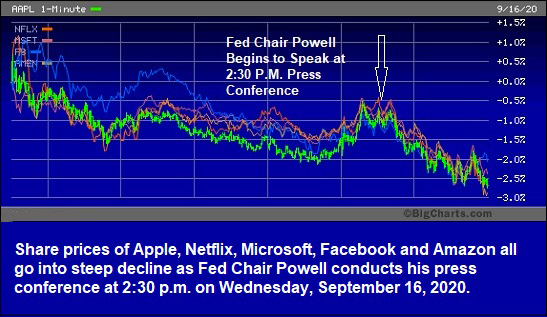 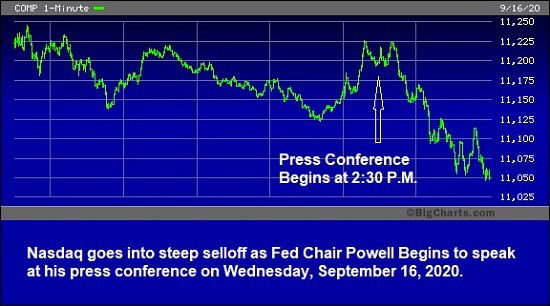 Nasdaq and its biggest stock components stomped their feet and gave the Fed Chairman a big thumbs down for his remarks at his press conference yesterday.

As Fed Chairman Jerome (Jay) Powell began to speak at the press conference that commenced at 2:30 p.m. yesterday, the Nasdaq Composite stood at 11,204.36. By the time Powell stopped speaking at around 3:30 p.m., the Nasdaq stood at 11,066.15, down 138 points from an hour earlier. After a failed attempt to rally, the Nasdaq slumped to the closing bell, ending the day just 4 points from its low of the day, closing at 11,050.47. (See chart above.) As of 7:20 a.m. this morning, Nasdaq futures were suggesting a further big decline at the open.

Big tech names led the decline in the Nasdaq yesterday. Companies like Apple, Amazon, Microsoft and Netflix depend on financially healthy consumers spending their money on their products. Facebook depends on advertisers competing for the consumers’ dollars – which requires that consumers actually have discretionary income to spend. Powell’s dour outlook for the next three years, where it’s expected to be a tough slog to get inflation rearing its head even in the 2 percent range, was not a joyous sound to big tech.

The Fed Chair also invoked, on several occasions, the need for Congress to pass more fiscal stimulus to make sure the economic recovery continues. Putting the fate of the economy in the hands of two political parties that currently hate each other and are running political ads ripping each other apart is not what the markets want to hear. For example, Powell stated the following:

“A full economic recovery is unlikely until people are confident that it is safe to reengage in a broad range of activities. The path forward will also depend on the policy actions taken across all parts of the government to provide relief and to support the recovery for as long as needed…”

“I would just say there are still roughly 11 million people still out of work due to the pandemic. And a good part of those people were working in industries that are likely to struggle. Those people may need additional support as they try to find their way through what will be a difficult time for them. We’ve also got struggling small businesses, especially those in the business of facing directly to the public. And we have state and local governments dealing with a drop in revenue at the same time spending has gone up, much of it related to the pandemic and economic effects. So again, I would say the fiscal support has been essential in the good progress we see now. And finally, I’ll note that just about all, the overwhelming majority of private forecasters who project an ongoing recovery, are assuming there will be a substantial additional fiscal support.”

In response to a question from a reporter about what’s going to happen until a vaccine is widely available, Powell said this:

“I do think, though, there are areas of the economy that are just going to really struggle until we have a vaccine that’s in wide usage and is as widely trusted. And those are the ones where people were getting really close together.”

You can read the full transcript of the press conference and watch the Fed Chairman speak at this link.

Unless you’re a lonely sheepherder in the hills of Colorado, chances are you work (or worked) in a business where “people were getting really close together.” What comes readily to mind are the following: restaurants, bars, gyms, stadiums, concert halls, movie theatres, fun parks, water parks, schools, colleges and universities, meat and food packing plants, grocery stores, department stores, trading floors of every Wall Street firm, cashier windows at banks, subways, buses, trains and airplanes – in other words, life as we know it (or knew it).

Probably not helping the mood on Wall Street was testimony yesterday from Robert Redfield, the Director of the Centers for Disease Control and Prevention (CDC), before the Senate Subcommittee on Labor, Health and Human Services, Education, and Related Agencies. In complete contradiction of President Trump’s assertions that a vaccine could be available to the general public before the end of this year, Redfield said this in response to a question from Republican Senator John Kennedy:

“Well, I think as Dr. Kadlec said, I think there will be a vaccine that will initially be available sometime between November and December, but very limited supply. And it will have to be prioritized. If you’re asking me when is it going to be generally available to the American public so that we can begin to take advantage of vaccine to get back to our regular life, I think we’re probably looking at late second quarter, third quarter 2021.”

Redfield went on to explain that the early doses will be prioritized for first responders and people who have health issues that make them a high risk for COVID-19. You can watch the exchange between Kennedy and Redfield at 1:00:19 here.

American businesses, public schools, colleges and universities, states and local governments need accurate information in order to make the best use of scarce resources and money and plan appropriately. For example, if they knew that it could be a year before the vaccine would be widely available, they might have spent funds to install improved ventilation systems or restructure work areas to better facilitate social distancing. Department stores might have invested more heavily in online sales and marketing had they known this could be a two-year haul. Some restaurants might have opted to convert solely to take-out orders.

Providing false information to American businesses and policymakers has consequences that will impact the long-term competitiveness of the U.S. Had Congress had this critical information earlier, a much larger stimulus bill could have already made its way into the economy, saving thousands of small businesses that have already shuttered.

The vast U.S. military budget could have been trimmed – redirecting the funds to saving millions of jobs and businesses.

The Defense Production Act could have been deployed to bring N95 masks to the full population of the U.S. instead of allowing the online marketing of some highly questionable masks made from porous material which are likely to allow virus droplets to penetrate. (Read here for materials to avoid when buying an online mask and materials to use when making your own masks.)

This has, indeed, been a war against an invisible enemy. But it was fought with lies and coverups instead of a carefully constructed, long-term battle plan that all Americans were committed to and engaged in.