Citigroup, Closely Tied to the Clintons, Had a Senior V.P. Outed as a QAnon Promoter, a Conspiracy Group that Reviles the Clintons 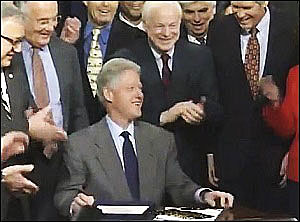 This is the perfect litmus test of just how little mainstream media knows about the dangerous Wall Street banks. Last Thursday, the fact-checking website, Logically, outed Jason Gelinas, who was living a secret-life as a promoter of the conspiracy group, QAnon, while also holding down a Senior V.P. technology position at Citigroup, a giant Wall Street bank that played a key role in the financial and economic collapse of 2008. But instead of headlining the story as “Citigroup V.P Outed as QAnon Promoter,” dozens of headlines described Gelinas as “NJ Man.” (Check out the “NJ Man” headlines here.) As far as we’re aware, there is no context in which the state of New Jersey would be relevant to this story, but there certainly is relevance when it comes to Citigroup.

Citigroup has remained strangely silent about the matter, declining to respond to a request from a Bloomberg News reporter as well as an email inquiry sent by Wall Street On Parade. It’s an embarrassment to Citigroup for sure. A leaked FBI memo that specifically names QAnon, indicated that such groups may pose a domestic terrorism threat. That’s not exactly someone you want in a senior role in technology security at one of the largest banks in the country.

QAnon’s conspiracy theories stem from an anonymous poster known as “Q,” whom QAnon followers believe is a person inside the Trump administration helping the President uncover and expose an evil cartel that includes child sex traffickers. In the eyes of QAnon commenters, Trump has taken on super action figure status while Hillary and Bill Clinton have been designated permanent roles in the evil cartel.

Deconstructing the posts on the various QAnon websites, it’s very hard not to draw the conclusion that Q is someone in the Trump campaign, or a zealous Trump supporter, simply trying to throw red meat to Trump’s base and keep them engaged.

We located a French language website, DisSept.com, which has a direct link to the QAnon website set up by Gelinas, QMap.pub, (now taken down but visible at the Wayback Machine) and echoes the same themes: Trump is out to save the U.S. while the Clintons are pure evil.

A website analytics firm, SimilarWeb.com, shows that DisSept.com was the main referral site to QMap, although the bulk of QMap’s 10 million visitors a month in May, June and July were coming directly to the site, not through a referral site.

There is heavy irony in Citigroup now being outed as the employer of Gelinas, whose LinkedIn resume (also now removed) indicated he had worked for the bank for the past 17 years. Citigroup has a heavy history with the Clintons. President Bill Clinton’s Treasury Secretary was Robert Rubin. After Rubin helped to engineer the 1999 repeal of the 1933 banking legislation known as the Glass-Steagall Act, allowing federally-insured banks to merge with Wall Street trading casinos, Rubin became a member of the Citigroup Board of Directors and reaped $120 million in compensation over the next decade. Citigroup desperately needed the repeal of this legislation because it had already illegally merged Citicorp with Salomon Brothers the prior year.

Sandy Weill, the Co-CEO at Citigroup in 1999, who lobbied for the repeal of Glass-Steagall, was given a commemorative pen from the Clinton signing ceremony that repealed the legislation. Just nine years after the repeal, Wall Street banks like Citigroup blew up Wall Street, taking down the U.S. economy in the process.

According to PolitiFact, Citigroup was the bank that provided the Clintons with a $1.995 million mortgage to buy their Washington, D.C. residence in 2000, as President Bill Clinton’s second term in the White House was ending.

Citigroup also paid Bill Clinton hundreds of thousands of dollars in speaking fees after he left the White House according to financial disclosure forms. The bank also committed at least $5.5 million to the Clinton Global Initiative — a nonprofit created by Bill Clinton in 2005, after leaving the White House. The nonprofit previously brought global leaders together annually to make action commitments.

According to the Center for Responsive Politics, Citigroup was the number one contributor to Hillary Clinton’s reelection run for the Senate in 2006. Goldman Sachs was number two. The banks are not allowed to donate directly to the candidate. The money comes from bank employees, their spouses, and the banks’ political action committees.