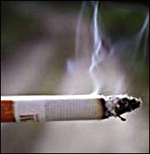 Taxpayers’ money under the CARES Act is going up in smoke — literally.

As of today, there are more than 32,000 people in the United States hospitalized with COVID-19, with thousands struggling to breathe from a virus that attacks the respiratory system as well as other parts of the body. So what has the Federal Reserve decided to do to help out during this national health crisis? It’s propping up the prices of the bonds issued by fossil fuel corporations and Big Tobacco – two serial polluters of the air we breathe.

The Fed decided to release its first list of individual corporate bond purchases in its Secondary Market Corporate Credit Facility today – on Sunday – when folks are out taking a walk with face masks in an effort to avoid dangerous particles in the air. The same Fed facility, which is using $25 billion of the $454 billion of taxpayer money provided as part of the CARES Act to absorb any losses on the Fed’s bailout facilities, previously reported its purchases of junk bonds and investment grade bonds packaged as Exchange Traded Funds (ETFs). Pulling back the curtain on that news was equally stomach churning.

One of the corporations whose bonds are being bought by the Fed is Philip Morris International. The company says on its website that it manufactures “six of the top 15 international brands” of cigarettes in the world. Its brands include: Marlboro, Parliament, Virginia Slims, Chesterfield, L&M, Lark, Merit, Muratti, Philip Morris, Bond Street, Next, and Red & White.

After spending decades lying about the devastating health effects of its cigarettes, Philip Morris International now says it’s on a crusade to come clean. Imagine promoting your product as follows on your own corporate website:

“When a cigarette is lit, the tobacco burns and creates smoke. In cigarette smoke more than 6,000 chemicals or ‘smoke constituents’ have been identified. Public-health authorities have classified approximately 100 of them as causes or potential causes of smoking-related diseases such as lung cancer, cardiovascular disease, and emphysema. These constituents include among others arsenic, benzene, benzo[a]pyrene, carbon monoxide, heavy metals (such as lead and cadmium), hydrogen cyanide, and tobacco-specific nitrosamines…

“Secondhand smoke, also known as environmental tobacco smoke (ETS), is a combination of the smoke produced from the lit end of a cigarette and the smoke exhaled by smokers.

“Public health authorities, including the WHO, have concluded that secondhand smoke causes diseases, including lung cancer and heart disease, in nonsmoking adults, as well as conditions in children such as asthma, respiratory infections, cough, wheezing, otitis media (middle ear infection), and sudden infant death syndrome. In addition, public health officials have concluded that secondhand smoke can exacerbate adult asthma and cause eye, throat, and nasal irritation.

“The public should be informed about these conclusions and guided by them in deciding whether to be in places where secondhand smoke is present or, if they are smokers, when and where to smoke around others. Smokers should not smoke around children or pregnant women.”

The Federal Reserve, the sage central bank of the United States, spent $6.23 million buying the bonds of Philip Morris International in this initial round of purchases.

Fossil fuel bonds bucked up by the Fed’s purchases include those of Exxon Mobil; Chevron; Duke Energy; Phillips 66; and Marathon Petroleum. The Fed’s summary sheet said it had spent $17.5 million on energy-related corporate bonds during this first round of purchases.

The Fed has announced that it plans to spend a total of $750 billion by September 30 buying up corporate bonds in both the primary and secondary markets. It is buying both investment grade and junk bonds, provided that the bonds had an investment grade rating as of March 22. Through June 16, the Fed said its secondary market corporate bond purchases thus far were rated as follows: 48.07 percent A to AAA; 48.31 percent BBB (which is the lowest level before junk); and 3.62 percent rated BB.

Many market watchers believe the Fed is simply removing BBB-rated bonds from the balance sheets of the big Wall Street banks before they are downgraded to junk, in order to prevent massive new loan loss provisions at the banks and continued pressure on their share prices.