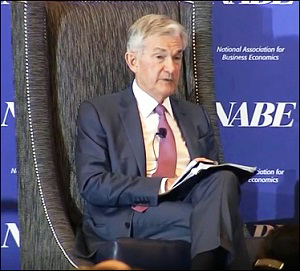 Yesterday, at a speaking event in Denver at the National Association of Business Economists, Federal Reserve Chairman Jerome Powell acknowledged that a larger, long-term bailout of Wall Street is coming. His two key points were buried in a subterfuge of puffery but came across loud and clear: “…my colleagues and I will soon announce measures to add to the supply of reserves over time.” And this: “As we indicated in our March statement on balance sheet normalization, at some point, we will begin increasing our securities holdings to maintain an appropriate level of reserves. That time is now upon us.”

The Fed’s balance sheet had been bloated to the unprecedented level of $4.5 trillion by buying up bonds from Wall Street’s teetering banks during the financial crisis. The Fed likes to give its Wall Street bailouts fancy names to disguise their real purpose. This one was called Quantitative Easing or QE. From November 2008 until October 2014, the Fed deployed three rounds of QE – QE1, QE2 and QE3. The final one was known on Wall Street as QE-Infinity since it appeared to be open-ended.

On January 7, 2008, the Fed’s balance sheet stood at $881 billion. By 2015 and three rounds of QE it had spiraled out of control to $4.5 trillion. Yellen started her normalization program to shrink the Fed’s balance sheet in October 2017 by eliminating rolling over the Fed’s maturing Treasury securities and principal payments on agency mortgage-backed securities that the Fed had bought up from Wall Street banks. Powell’s Federal Reserve stopped that runoff this past August. The Fed is back to reinvesting its maturing bonds into new bonds to once again balloon its balance sheet.

On top of that, beginning on September 17 of this year, the Fed has been funneling hundreds of billions of dollars a week in revolving loans to Wall Street securities firms (primary dealers) by intervening in the repurchase agreement (repo) market. Between September 11 and September 30, the Fed’s balance sheet has exploded by $176 billion – in just 19 days – to a total of $3.9 trillion. (See graph below from the Federal Reserve.)

As recently as June 13 of last year, Powell was of a very different mind. During his press conference on that date, Powell explained the normalization schedule, stating: “…our program for reducing our balance sheet, which began in October, is proceeding smoothly. Barring a material and unexpected weakening in the outlook, this program will proceed on schedule, and our balance sheet will continue to shrink.”

Since Powell is no longer shrinking the Fed’s balance sheet but dramatically expanding it, we should take him at his word at that press conference and conclude that there has been an “unexpected weakening in the outlook,” despite the fact that he continues to put a rosy spin on the U.S. economy in his speeches.

The Federal Reserve has clearly known for months that what it was planning to do to bail out the financial system again was not going to be popular with the American people and that it was likely to come under heavy fire from some members of Congress. So on February 25 it launched a public relations campaign called “Fed Listens.” It describes its listening tour around the country like this:

“At the Fed, we’re currently reviewing our monetary policy strategy to find out if there are ways it could be improved to achieve the goals assigned to us by law. To make sure we consider a broad range of views from the public we serve, we’re holding Fed Listens events in diverse locations across the U.S. These events will focus on communities where, despite a strong economy, people are struggling to keep pace.”

The Fed knows very well that people are struggling today to keep pace because from December 2007 to July 2010 it secretly pumped a cumulative $29 trillion to bail out Wall Street mega banks and the foreign banks that were counterparties to their wild derivative schemes. A significant portion of the Fed loans were offered at interest rates below 1 percent when some of these banks were teetering or outright insolvent and couldn’t have borrowed in the open market at even 10 percent. While the Fed was spewing its generosity on Wall Street miscreants who had brought on their own collapse through corrupt subprime and derivatives dealings, the Fed remained silent as these same Wall Street banks under its supervision charged struggling households high double-digit interest rates on credit cards; foreclosed on millions of homes leaving entire neighborhoods blighted; profited from side bets they had made that their own designed-to-fail mortgage bonds would collapse; and then paid themselves billions of dollars in bonuses from taxpayer bailout funds.

Nothing better illustrates the cronyism between Wall Street and the New York Fed, which, then and now, carries out the majority of the Federal Reserve’s bailout programs for Wall Street, than a passage from Neil Barofsky’s book, Bailout: An Inside Account of How Washington Abandoned Main Street While Rescuing Wall Street. Barofsky had been the Special Inspector General of the taxpayer bailout program known as TARP or Troubled Asset Relief Program. In his book he writes about U.S. Treasury Secretary Tim Geithner who failed up to that position after negligently supervising the mega banks on Wall Street as the President of the Federal Reserve Bank of New York. Barofsky writes about Geithner’s sick plan to “foam the runway” for the Wall Street banks:

“A lightbulb went on for me. Elizabeth had been challenging Geithner on how the program was going to help home owners, and he had responded by citing how it would help the banks. Geithner apparently looked at HAMP as an aid to the banks, keeping the full flush of foreclosures from hitting the financial system all at the same time. Though they could handle up to ‘10 million foreclosures’ over time, any more than that, or if the foreclosures were too concentrated, and the losses that the banks might suffer on their first and second mortgages could push them into insolvency, requiring yet another round of TARP bailouts. So HAMP would ‘foam the runway’ by stretching out the foreclosures, giving the banks more time to absorb losses while the other parts of the bailouts juiced bank profits that could then fill the capital holes created by housing losses.”

As a direct result of Federal Reserve policies during the financial crisis, the United States of America is experiencing its worst income and wealth inequality since the late 1920s – another era when Wall Street had gained control of the levers of power in Washington. 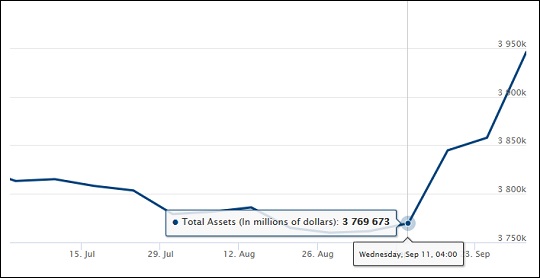