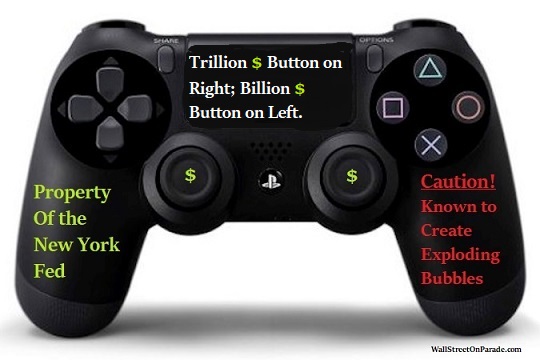 The Fed is back to its same ole bait and switch routine.

Yesterday, the Federal Reserve issued a press release, which, on the surface, made it sound like the Fed is going to make full disclosure on where its trillions of dollars in money created out of thin air is going. Unfortunately, upon closer inspection, the Fed is saying it will only release the names and details of its programs where the taxpayer is putting up money to absorb losses.

That leaves the following programs with no guarantee of timely transparency: the Fed’s repo loan program which has already made more than $9 trillion in super cheap revolving loans to the trading houses on Wall Street; the Fed’s Discount Window which, as of this past Wednesday, has a balance of $33.7 billion that went to unknown banks; the $31.5 billion currently outstanding at the Fed’s Primary Dealer Credit Facility, which is making revolving loans at ¼ of one percent to the trading houses on Wall Street against collateral that includes stocks and toxic waste known as CDOs and CLOs.

Then there is the $409.7 billion that, as of Wednesday of this week, is currently outstanding to unnamed foreign central banks in dollar swap lines from the Fed.

The opening sentence of the Fed’s press release yesterday touted the Fed’s “strong record of transparency and accountability….” That sentence could have come straight out of The Onion, the satirical news site. This is the Federal Reserve that during the last financial crisis battled media outlets in court for almost three years to keep its staggering $29 trillion in revolving loans to Wall Street and its minions a secret from the American people and Congress. Here’s the timeline of the Fed’s “transparency and accountability” when it came to Bloomberg News’ request for loan details in 2008:

May 21, 2008:  Bloomberg News files a Freedom of Information Act request with the Fed. The Fed stonewalls this request;

Nov. 7, 2008:  Bloomberg News files a lawsuit against the Federal Reserve in the U.S. District Court for the Southern District of New York in New York City;

Sept. 30, 2009: the Federal Reserve appeals the District Court decision to the 2nd Circuit Court of Appeals;

May 4, 2010: the Federal Reserve and mega banks on Wall Street cloaking themselves as the Clearing House Association ask the 2nd Circuit to convene its full roster of Judges (rehearing en banc) to overturn the District Court decision;

Aug. 23, 2010: the full appeals panel of the 2nd Circuit refuses to overturn the District Court decision;

Oct. 26, 2010: the Clearing House Association files a petition to the U.S. Supreme Court to accept its appeal.

Much of the Fed’s data had already been released prior to the U.S. Supreme Court ruling as a result of an amendment attached to the Dodd-Frank financial reform legislation of 2010 by Senator Bernie Sanders.

Under the current language of the Dodd-Frank Act, the Fed would not have to release the Discount Window data and its “open market” programs until “the last day of the eighth calendar quarter following the calendar quarter in which the covered transaction was conducted.” It could take years to get a complete picture.

As for the Primary Dealer Credit Facility (PDCF), through which the Fed made $8.95 trillion in secret cumulative loans from March 16, 2008 to February 1, 2010 to Wall Street and foreign global banks during the last financial crisis, it could once again take years to learn the details. The PDCF was created under the Fed’s so-called 13(3) emergency lending program but as of now, it is not accepting taxpayer money from the U.S. treasury to absorb its losses. Dodd-Frank says this about that program: “For emergency lending facilities created under Section 13(3) of the Federal Reserve Act, the information must be released one year after the effective date of termination of the authorization of the facility.”

The last time around, the Fed funneled two-thirds of the $8.95 trillion that went out as loans from the PDCF to just three Wall Street firms: Citigroup, Morgan Stanley and Merrill Lynch and much of that money went to their trading houses in London. That certainly didn’t help American households and workers as the Fed keeps telling us is its goal.

To underscore the Fed’s arrogance when it comes to the public’s right to know under Chairman Jerome Powell, this is how the Federal Reserve handled Wall Street On Parade’s Freedom of Information Act request last year. We filed the request electronically on November 12, 2019 seeking correspondence relevant to why JPMorgan Chase had drawn down a dramatic part of the cash reserves it held at the Fed in the first six months of 2019. (That was long before there was any coronavirus panic anywhere in the world.) The Fed acknowledged receiving our request. Under FOIA law, the Fed had 20 business days to respond. We heard nothing from the Fed for four months. On March 11, 2020, we received a response from the Fed stating that it had 233 relevant documents but we would get none of them.

This is an institution that has spiraled out of control, is accountable to no one, while granting itself the authority to create unlimited sums of money out of thin air.