We knew Fed Chair Jerome (Jay) Powell was not on solid footing last Tuesday when he answered a question at his press conference from Washington Post reporter, Heather Long. She wanted to know how he felt about “rising concern about credit markets and possible insolvencies and defaults either from businesses or individuals from the coronavirus.” Powell answered Long with this: “financial markets are functioning in an orderly manner and all that sort of thing.”

That wasn’t true then and it certainly isn’t true as of noon today. The Fed Chair neglected to mention to Long that beginning on September 17, 2019, as a result of disorderly market functioning, it had started pumping out hundreds of billions of dollars in super-cheap loans each week to trading houses on Wall Street – the first time it had made such repo loans since the financial crash of 2008.

According to charts at the Dow Jones-owned website, BigCharts.com, the Dow Jones Industrial Average experienced a loss of 2,046.10 points (or 7.9 percent) this morning before trading was halted for 15 minutes. The New York Stock Exchange halts market-wide trading under the following conditions, according to its website:

“A cross-market trading halt can be triggered at three circuit breaker thresholds that measure a decrease against the prior day’s closing price of the S&P 500 Index — 7% (Level 1), 13% (Level 2), and 20% (Level 3)…Following a Level 1 or Level 2 breach, trading will be halted for 15 minutes and then the listing exchanges (NYSE, NYSE American, and NYSE Arca) will reopen trading in their listed symbols pursuant to their respective rules…After a Level 3 breach, trading on NYSE Group exchanges will remain halted for the rest of the trading day.”

As of 11:21 a.m. this morning, the Dow Jones Industrial Average was trading at a level that was 959 points lower than the Dow closed at two years ago on March 9, 2018. So much for all that saving and faithfully socking away money in 401(k) plans. See 401(k) Plan Has Been a Disaster for Black Workers (And a Wealth Transfer to Wall Street for Everyone Else).

The three stocks listed below particularly caught our eye this morning. Lincoln National is an insurer that, according to the U.S. Treasury’s Office of Financial Research, is interconnected to the Wall Street banks as a derivatives counterparty. It was down this morning by a whopping 14.36 percent. Bank of America is deeply enmeshed in the derivatives’ market as is JPMorgan Chase. Both of those Wall Street banks, which own giant federally-insured, deposit taking banks as well as being behemoth Wall Street trading houses, were off by more than 12 percent this morning. We haven’t seen one-day declines like that in Wall Street bank stocks since the financial crisis of 2008. The market is clearly trying to tell us something about these names. We should listen. 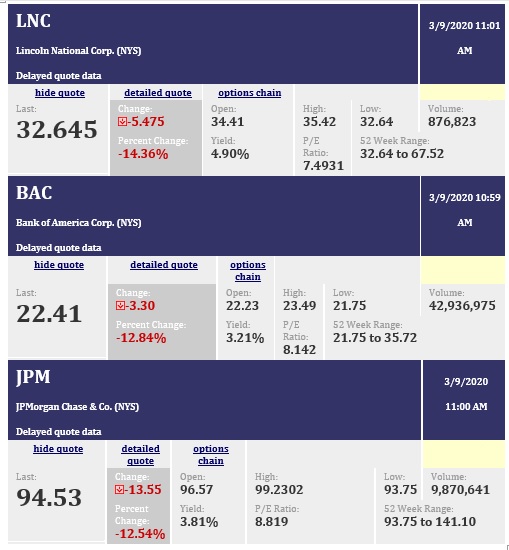