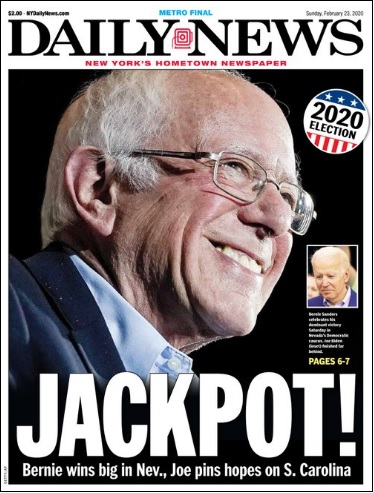 One month ago former presidential candidate Hillary Clinton confirmed to Hollywood Reporter Lacey Rose that the remark she had made in a recent documentary that “nobody likes” Senator Bernie Sanders was still her assessment of the situation. That assessment was silly a month ago and became even more nonsensical yesterday morning as newspapers landed in driveways across America showing a massive win for Sanders in the Nevada caucuses, including big support from both whites and minorities.

According to Newsweek, Sanders’ win in the Nevada Caucuses on Saturday “made political history.” He became the first presidential candidate, from either party, “to win the popular vote in all three early states in a competitive primary.”

But Sanders didn’t simply win Nevada – he crushed the contest. With 88 percent of the vote now in, Sanders has captured 47.1 percent of the county convention delegate votes versus 21 percent for former Vice President Joe Biden; 13.7 percent for Pete Buttigieg; 9.6 percent for Senator Elizabeth Warren; 4.7 percent for Tom Steyer; and 3.9 percent for Amy Klobuchar. (Former New York City Mayor Michael Bloomberg has yet to compete in any caucus or primary, despite his presidential campaign committee spending over $400 million, according to the Federal Election Commission. Bloomberg, a billionaire worth $61.5 billion, is self-funding his campaign.)

Young voters overwhelmingly voted for Sanders, who took approximately 60 percent of the vote from those under the age of 45. Sanders also won approximately 50 percent of the Latino vote, far more than any other candidate, including Joe Biden. Sanders did exceptionally well with union voters, despite the leadership of the Culinary Union bucking Sanders over his Medicare for All plan versus their own health care plan. Apparently, the union’s rank and file had a different opinion about what was in their best interests.

The lineup of key events for Democratic presidential contenders will arrive in rapid succession over the next nine days. By March 4, it is expected that there will be far fewer candidates in the Democratic field for President. Tomorrow night is the next Democratic debate in Charleston, South Carolina. It will be co-hosted by CBS News and the Congressional Black Caucus Institute. The debate will air at 8 p.m. Michael Bloomberg knows that if he gives another disastrous performance on the debate stage, as he did in Nevada on February 19 in his first debate appearance, he may seal his fate as a viable candidate. (See Bloomberg Was Stopped, Frisked and Bruised at Debate.)

After the debate, the next big event is this coming Saturday’s primary in South Carolina on February 29. Biden was polling in first place there according to a CBS News/YouGov poll, but by a slim margin of 5 points. The poll also showed that Biden’s support had slipped dramatically. He now commands a 28 percent share of the vote versus Sanders at 23 percent. And the poll was taken prior to the news of Sanders’ big win in Nevada, which could cause voters to rethink their preference.

Then, the make-or-break event, Super Tuesday, arrives on March 3. Fourteen states will hold Democratic presidential primaries on that date, including California with a whopping 415 delegates to distribute to Democratic presidential contenders and Texas with 228 delegates. Other states holding Democratic primaries on that date include: Alabama, Arkansas, Colorado, Maine, Massachusetts, Minnesota, North Carolina, Oklahoma, Tennessee, Utah, Vermont, and Virginia.

As a sign that corporate media is getting nervous about underestimating Sanders’ ability to build a broad coalition of voters to challenge the stranglehold that Wall Street Democrats have had on the party, Anderson Cooper interviewed Sanders on last evening’s 60 Minutes program on CBS. Cooper asked Sanders about making some people nervous with the talk of a political revolution. Sanders responded this way:

“Well, I mean, you know, but I don’t want people, you know, to overstate that. But here is the point. It’s not good enough to complain, ‘Oh, I cannot afford my health care. I can’t afford childcare. I can’t afford to send my kid to college. I’m paying half of my income in rent.’ You know, if you’re not happy about that, you got to be involved in the political process. Only millions of people standing up for justice can bring about the kind of change that this country requires. And I believe that has got to happen.”

Cooper also asked Sanders about Trump’s promise to make America great again versus Sanders’ stump speeches which focus on how America is not working. Cooper said: “Is America great?” Sanders responded with this:

“In many ways, we are. In some ways, very significant ways, we’re not. We’re not great when half of our people today are living paycheck to paycheck. When 500,000 people tonight are going to be sleeping out on the streets, including 30,000 veterans. You know, my father came to this country at the age of 17 without a nickel in his pocket. Couldn’t speak a word of English, had very limited education. We are a great nation, because people like my father would never have dreamed in a million years that their kids would become United States senators or be successful in many other ways.”

When Cooper needled Sanders about how he was going to pay for his programs for working families, Sanders said this: