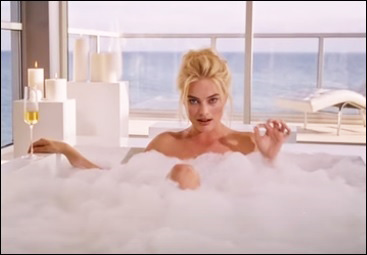 Margot Robbie in the Movie, “The Big Short,” Which Focused on How Derivatives Blew Up Wall Street in 2008

Lily Tomlin is credited with the quote: “No matter how cynical you get, it is impossible to keep up.” Wall Street regularly brings that message home.

According to the latest derivatives report from the Office of the Comptroller of the Currency (OCC), Citibank, the federally-insured, taxpayer-backstopped bank owned by Citigroup, has sold protection to other banks, hedge funds, insurance companies or corporations on a staggering $858 billion of Credit Default Swaps. When a federally-insured bank sells protection to others on Credit Default Swaps, it is effectively taking on the risk of a default event. At a time of unprecedented levels of debt in the system and growing warnings about leveraged loans, that seems like a very unwise move by Citigroup.

The OCC notes that Citibank has bought protection via a larger amount of Credit Default Swaps – a total of $898.8 billion. (See Table 12 in the Appendix of the report.) There is no guarantee, however, that these bets are properly aligned and will not, once again, blow up this bank along with a chunk of Wall Street firms or insurance companies that may be its counterparties.

Credit Default Swaps played a central role in the 2008 financial collapse on Wall Street, as did Citigroup. It is an indictment of every federal banking regulator in the United States, as well as Congress, that Citigroup has been allowed to return as a major player in this market while using its federally-insured Citibank once again as a pawn in this game.

Adding to the outrage, it was Citigroup that was responsible for overturning the portion of the Dodd-Frank financial reform legislation of 2010 that would have pushed these derivatives out of federally-insured banks.

It may also help to explain why the New York Fed continues to fling hundreds of billions of dollars each week at the trading houses on Wall Street while the Federal Reserve Chairman, Jerome Powell, insists that everything is just fine on Wall Street.

The official report from the Financial Crisis Inquiry Commission, following an in-depth investigation of the 2008 collapse, wrote this about Credit Default Swaps:

“OTC derivatives contributed to the crisis in three significant ways. First, one type of derivative—credit default swaps (CDS)—fueled the mortgage securitization pipeline. CDS were sold to investors to protect against the default or decline in value of mortgage-related securities backed by risky loans…

“Second, CDS were essential to the creation of synthetic CDOs. These synthetic CDOs were merely bets on the performance of real mortgage-related securities. They amplified the losses from the collapse of the housing bubble by allowing multiple bets on the same securities and helped spread them throughout the financial system…

“Unseen and unknown” are the operative words in the above paragraph. The Credit Default Swaps were, both then and now, mostly over-the-counter private contracts between a bank and a counterparty. The major Wall Street banks had no idea which of their banking peers had major exposure to bets that were collapsing in value, so the banks simply stopped lending to one another. That sounds a lot like what is happening today and why the New York Fed has become the lender of last resort as well as liquidity supplier of last resort.

Citigroup’s derivatives exposures rendered it a financial basket case during 2008. Not only did Citigroup receive $45 billion in equity infusions from the Troubled Asset Relief Program (TARP) approved by Congress and announced publicly but it went hat in hand and received a bailout from the same federal regulators who had allowed this house of cards to engage in absurd levels of risk. The government guaranteed over $300 billion of its dodgy assets; the Federal Deposit Insurance Corporation guaranteed $5.75 billion of its senior unsecured debt and $26 billion of its commercial paper and interbank deposits. And the New York Fed secretly hid from the public’s view that it had funneled $2.5 trillion (yes, trillion) to Citigroup and its trading units from December 2007 to at least July 21, 2010. That last information only became public after more than two years of court battles with the Fed.

That means that no bank should be making risky gambles to the tune of more than three-quarters of a trillion dollars.

According to insiders on Wall Street, the big positions in Credit Default Swaps at Citibank and JPMorgan Chase are being used to reignite the synthetic Collateralized Debt Obligation ( synthetic CDO) market – which vastly added to the leverage that blew up Wall Street in 2008.

The best description of how a synthetic CDO works resides in the report by the U.S. Senate’s Permanent Subcommittee on Investigations. Titled Anatomy of a Financial Collapse and released on April 13, 2011, the report found the following:

“The synthetic CDO made or lost money for its investors by establishing a contractual agreement that they would make payments to each other, based upon the aggregate performance of the underlying referenced assets, using CDS contracts. The ‘short’ party essentially agreed to make periodic payments, similar to insurance premiums, to the other party in exchange for an agreement that the ‘long’ party would pay the full face value of the synthetic CDO if the underlying assets lost value or experienced a defined credit event such as a ratings downgrade.  In essence, then, the synthetic CDO set up a wager in which the short party bet that its underlying assets would perform poorly, while the long party bet that they would perform well…

“Synthetic CDOs magnified the risk in the mortgage market because arrangers had no limit on the number of synthetic CDOs they could create.  In addition, multiple synthetic CDOs could reference the same RMBS and CDO securities in various combinations, and sell financial instruments dependent upon the same sets of high risk, poor quality loans over and over again to various investors. Since every synthetic CDO had to have a ‘short’ party betting on the failure of the referenced assets, at least some poor quality RMBS and CDO securities could be included in each transaction to attract those investors. When some of the high risk, poor quality loans later incurred delinquencies or defaults, they caused losses, not in a single RMBS, but in multiple cash, synthetic, and hybrid CDOs whose securities had been sold to a wide circle of investors.”

Wall Street and its negligent regulators were solely responsible for collapsing the U.S. job market, the U.S. housing market and the U.S. economy in 2008 and subsequent years in what was the worst economic collapse since the Great Depression. That Wall Street is now being allowed to conduct itself as a giant casino again is why Americans must demand the restoration of the Glass-Steagall Act — which would ban these casino bank holding companies from owning federally-insured banks.