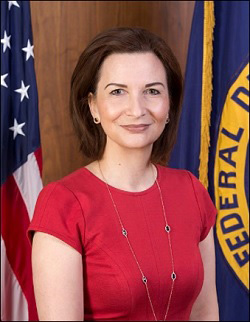 Jelena McWilliams, Chair of the FDIC

Jelena McWilliams is a Trump appointee who currently serves as the Chairwoman of the Federal Deposit Insurance Corporation (FDIC), the federal agency responsible for insuring the deposits of commercial banks and savings associations in the United States. McWilliams also knows her way around Wall Street. Her resume at the FDIC states that “Before entering public service, she practiced corporate and securities law at Morrison & Foerster LLP in Palo Alto, California, and Hogan & Hartson LLP (now Hogan Lovells LLP) in Washington, D.C.” As a corporate lawyer, McWilliams “represented publicly and privately-held companies in mergers and acquisitions, securities offerings, strategic business ventures, venture capital investments, and general corporate matters.”

McWilliams put her Wall Street savvy to work from 2012 to 2017 in the positions of deputy staff director, chief counsel and senior counsel to the U.S. Senate Banking Committee where she assisted former Republican Committee Chairs Richard Shelby and Mike Crapo in their efforts to deregulate Wall Street banks by loosening or repealing parts of the Dodd-Frank financial reform legislation that was passed under the Obama administration in 2010. (See her full career bio below.)

McWilliams was in New York this week to give a speech at a commercial real estate conference. Andrea Riquier, a reporter for the Dow Jones news organization, MarketWatch, was able to snag an interview with her on a range of subjects. On the matter of why the Federal Reserve is now infusing hundreds of billions of dollars a week into Wall Street securities firms, the first time it has done so through the repo market since the financial crisis, the exchange went like this:

Riquier: “Can we talk about the recent flareup in the repo market? What happened? I have a colleague who says when something like that happens, the market is trying to tell us something.

McWilliams: “Yes. (Laughs.) The irony of this is, I have met with large bank CEOs that are in the market and are sitting on, frankly, a trillion plus dollars of cash. I’m wondering why exactly, why didn’t they go into the marketplace, recognizing there was a shortfall and they could have made money. So we are meeting now with their treasurers and chief risk officers to understand exactly the reasons why. If it’s regulations, we need to make sure we understand. If they are holding on to money —cash — and U.S. Treasurys because our rules require them to, and that’s causing liquidity not to be in the marketplace, we should fix that. Because you want a liquid marketplace and it’s supposed to work seamlessly, right? We’re not sure actually that’s the largest component of what happened but once we’re done talking to all the large banks we’ll have a better sense.”

Before we address why this is not a forthright response from McWilliams, allow us to suggest that the heads of federal banking regulators have a history of lying to the American public when a big Wall Street bank is in trouble. Sheila Bair held McWilliams’ job at the helm of the FDIC during the financial crisis. She was one of those rare public servants who felt Americans deserved to know the truth and she wrote a book, Bull By the Horns, to lay out the dirty dealings that occurred during the greatest Wall Street crash since the Great Depression.

Bair indicates in her book that she believed two regulators of the mega bank, Citigroup, were not being honest with the American people about Citigroup’s true condition. Those regulators were John Dugan (a former bank lobbyist) at the Office of the Comptroller of the Currency (OCC) and Tim Geithner, then President of the Federal Reserve Bank of New York. (The New York Fed is the institution currently funneling out the hundreds of billions of dollars a week to Wall Street without any explanation to the American people as to what is causing the liquidity crisis.)

“By November [of 2008], the supposedly solvent Citi was back on the ropes, in need of another government handout. The market didn’t buy the OCC’s and NY Fed’s strategy of making it look as though Citi was as healthy as the other commercial banks. Citi had not had a profitable quarter since the second quarter of 2007. Its losses were not attributable to uncontrollable ‘market conditions’; they were attributable to weak management, high levels of leverage, and excessive risk taking. It had major losses driven by their exposures to a virtual hit list of high-risk lending; subprime mortgages, ‘Alt-A’ mortgages, ‘designer’ credit cards, leveraged loans, and poorly underwritten commercial real estate. It had loaded up on exotic CDOs and auction-rate securities. It was taking losses on credit default swaps entered into with weak counterparties, and it had relied on unstable volatile funding – a lot of short-term loans and foreign deposits. If you wanted to make a definitive list of all the bad practices that had led to the crisis, all you had to do was look at Citi’s financial strategies…What’s more, virtually no meaningful supervisory measures had been taken against the bank by either the OCC or the NY Fed…Instead, the OCC and the NY Fed stood by as that sick bank continued to pay major dividends and pretended that it was healthy.”

There are so many parallels today to the very issues that Bair described as occurring a decade ago that it is absolutely chilling that such a failure in reforming Wall Street could have occurred in a so-called democracy.

But back to McWilliams’ nonsensical statement about how the FDIC is just now meeting with the “treasurers and chief risk officers” of the Wall Street banks to understand why overnight lending rates spiked from the typical 2 percent to 10 percent on September 17, necessitating the New York Fed to become the lender-of-last resort to the markets.

It has been more than seven weeks since the liquidity crisis occurred, showing that there is one or more financial firms that Wall Street is backing away from lending to and/or that the big banks sense a need to hold onto what ever liquid funds they have because they anticipate a blowup of some kind coming down the pike.

If you are the FDIC, whose job it is to ensure the safety and soundness of federally-insured banks, and to prevent a panic and a run on a bank – you get on top of this situation within 24 hours – not seven weeks later.

And it doesn’t take seven weeks to have those conversations with treasurers and chief risk officers at a slew of banks because there are only four banks you need to talk to in order to quickly assess what’s going on. As of June 30 of this year, according to data from the FDIC, these four banks held the lion’s share of deposits among the biggest banks in the United States: JPMorgan Chase held $1.6 trillion; Bank of America had $1.44 trillion; Wells Fargo accounted for $1.35 trillion; and Citigroup’s Citibank is home to just over $1 trillion in deposits. Those four banks, as insane as this kind of concentration is, account for $5.45 trillion in deposits.

And there are several smoking guns pointing directly at JPMorgan Chase as the folks the FDIC needs to grill as to what is going on.

“Analysts and bank rivals said big changes JPMorgan made in its balance sheet played a role in the spike in the repo market, which is an important adjunct to the Fed Funds market and used by the Fed to influence interest rates…Publicly-filed data shows JPMorgan reduced the cash it has on deposit at the Federal Reserve, from which it might have lent, by $158 billion in the year through June, a 57% decline.”

Any lay person, let alone a federal regulator with the work experience of McWilliams, should know that if a bank with $1.6 trillion in deposits needs to get its hands on a quick $158 billion (thereby raising red flags at its regulators) by grabbing 57 percent of its reserves from the New York Fed, this is no laughing matter. You need to get a squad of bank examiners inside the bank within 24 hours and issue a credible response to the American people in short order.

Jamie Dimon, Chairman and CEO of JPMorgan Chase, has already admitted on his October 15 earnings call with bank analysts that his bank backed away from making overnight loans on the pivotal day of September 17 when overnight lending rates spiked to 10 percent. Dimon said this about his bank’s reserves at the New York Fed according to the SeekingAlpha transcript of the call:

“But now the cash in the account, which is still huge. It’s $120 billion in the morning, and it goes down to $60 billion during the course of the day and back to $120 billion at the end of the day. That cash, we believe, is required under resolution and recovery and liquidity stress testing. And therefore, we could not redeploy it into repo market, which we would’ve been happy to do.”

That response fails to offer even a tiny morsel of understanding as to why JPMorgan Chase grabbed $158 billion of its liquidity from the Fed in a six month period this year and what it did with it.

On November 3, Robert Armstrong of the Financial Times reported that JPMorgan Chase “has pushed more than $130bn of excess cash into long-dated bonds and cut the amount of loans it holds” by $40 billion year-to-date. The paper quoted an institutional investor saying this about the bank’s actions: “The scale of what JPMorgan is doing is mind-boggling…migrating out of cash into securities while loans are flat.” The Financial Times reporter also noted that “Mortgage-backed securities account for the bulk of this growth” in “long-dated” securities.

As luck would have it, agency mortgage-backed securities are one of the instruments that the New York Fed is accepting as collateral in exchange for cash at the absurd interest rate of 1.55 percent – which is 8.45 percentage points less than the free market wanted to price those overnight repo loans on September 17, prior to the Fed’s interventions.

Equally problematic at the largest bank in the U.S., JPMorgan Chase explained in a recent SEC filing that it’s using some of its federally-insured deposits to prop up its share price with stock buybacks – furthering undermining any true price discovery in U.S. markets. The wording in its filing is as follows:

“In 2019, cash provided resulted from higher deposits and securities loaned or sold under repurchase agreements, partially offset by net payments on long-term borrowing…cash was used for repurchases of common stock and cash dividends on common and preferred stock.”

The role of federally-insured banks in the U.S., backstopped by the taxpayer, is to make sound loans to sound businesses and consumers in order to grow the U.S. economy, create good jobs and a higher standard of living for U.S. citizens, and to keep the U.S. competitive and innovative on the world stage.

The Federal Reserve’s history since 2008 has been one of abject failure at reining in abuses at these mega banks and then attempting to cover its tracks with a freely flowing spigot of money that amasses to trillions of dollars while Congress looks the other way. To date, there has not been one Congressional hearing scheduled to look into this matter.

2018 – present: Chairman, FDIC Board of Directors

2007-10: Federal Reserve Board of Governors (attorney, Division of Consumer and Community Affairs)