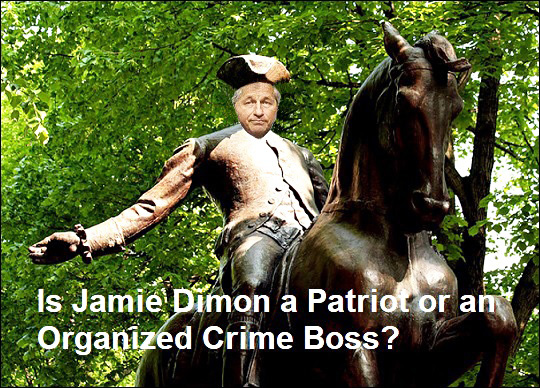 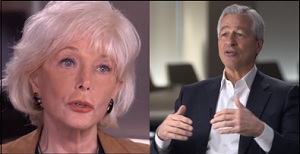 Jamie Dimon was interviewed by Lesley Stahl this evening on the CBS investigative news program, 60 Minutes. The gist of Dimon’s argument is that candidates for President, such as Senator Elizabeth Warren, should stop vilifying him simply because he’s “successful.” Dimon also wants the public to know that it’s “dead wrong” to think he’s not a “patriot.”

Dimon is a bit more than “successful” when it comes to the pile of money he has accumulated. According to Forbes, Dimon is worth $1.6 billion. The bulk of that money has come from stock grants while serving as Chief Executive Officer of the largest bank in the U.S., JPMorgan Chase, since December 31, 2005 as well as Chairman of the Board since December 31, 2006.

Unfortunately, there is a very substantive argument against Dimon being a patriot and a very persuasive argument that he’s a crime boss sitting atop a federally-insured bank backstopped by the U.S. taxpayer that has scooped up $1.6 trillion in deposits from honest folks across America.

No one has made this argument more effectively than two trial lawyers, Helen Davis Chaitman and Lance Gotthoffer in their 2016 book, JPMadoff: The Unholy Alliance between America’s Biggest Bank and America’s Biggest Crook.

Chapter Five of the book is titled: “The Case for Prosecuting Officers of JPMorgan Chase Under RICO.” The trial lawyers write:

“This country cannot move forward with integrity until it faces the fact that bankers have criminalized the financial services industry. We, the people, have to demand an honest government that enforces the law, even against super rich criminals. As Robert Kennedy said, ‘Every society gets the kind of criminal it deserves. What is equally true is that every community gets the kind of law enforcement it insists on…If Jamie Dimon is running a criminal institution, he should be prosecuted for it. And law enforcement has the perfect tool for such a prosecution: the Racketeer Influenced and Corrupt Organizations Act (‘RICO’).”

What gave the trial lawyers the idea that Jamie Dimon might be running a criminal institution? For starters, it is the only U.S. bank in history to have pleaded guilty to three criminal felony counts and kept the same man, Dimon, as its CEO despite the unprecedented criminal charges. (Remember, this is a federally-insured bank that will put the taxpayer on the hook if it goes belly up from criminal activities.)

The first two criminal charges that JPMorgan Chase pleaded guilty to came in 2014 and were related to its involvement in handling the Bernie Madoff business account where it had strong suspicions that Madoff was running a Ponzi scheme but failed to tell U.S. regulators. Another criminal felony charge came the very next year, also brought by the U.S. Department of Justice, for being one of the global banks that was rigging foreign currency trading. It is still on probation for that matter, to which it also pleaded guilty.

It is possible that prosecutors in the U.S. Department of Justice have read the RICO recommendations mapped out in the book by the trial lawyers because just this past September the Justice Department charged that the bank was running a criminal enterprise out of its precious metals desk over a period of eight years and charged three of its traders, including the head of the desk, under the RICO statute – which is typically reserved for organized crime figures. The prosecutors wrote: “As it relates to the RICO conspiracy, the defendants and their co-conspirators were allegedly members of an enterprise—namely, the precious metals desk at Bank A—and conducted the affairs of the desk through a pattern of racketeering activity, specifically, wire fraud affecting a financial institution and bank fraud.”

Chaitman and Gotthoffer also provide a rap sheet of serious fraud charges brought against JPMorgan Chase while Dimon sat at the helm that were settled for serious money but without criminal charges being leveled by the Justice Department. Here’s just a sampling:

“In December 2013, JPMC paid $22.1 million to settle claims that the bank imposed expensive and unnecessary flood insurance on homeowners whose mortgages the bank serviced.”

After Chaitman and Gotthoffer’s book was published, the crime spree at JPMorgan Chase continued. In 2016 the bank agreed to charges by the SEC that it had steered its customers into in-house products where it reaped higher profits without disclosing this conflict to the customer. It paid $267 million to settle these charges.

In 2018, JPMorgan was repeatedly charged. In October 2018 it agreed to pay $5.3 million to settle U.S. Treasury allegations that “it violated Cuban Assets Control Regulations, Iranian sanctions and Weapons of Mass Destruction sanctions 87 times,” according to Reuters.

In December 2018 it settled claims with the SEC for $135 million over charges that it had improperly handled thousands of transactions involving the shares of foreign companies.

The criminal investigation into the racketeering enterprise the bank was running out of its precious metals desk is ongoing with more indictments expected this month.

Lesley Stahl did not mention, or question, Dimon on any of the criminal charges to which his bank has pleaded guilty or the ongoing racketeering indictments.

We see no evidence thus far to suggest that Jamie Dimon is a “patriot.” It does, however, appear that Chaitman and Gotthoffer have done what true patriots throughout American history have done – they have sounded the alarm when others were too cowardly to do so.