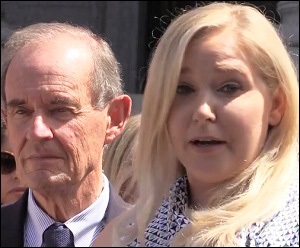 More than two dozen women who have accused Jeffrey Epstein of sexually assaulting them, most when they were underage girls, appeared in Federal Court in Manhattan yesterday. Some had their lawyers read their statement but 16 spoke on their own behalf. The theme consistent throughout their testimony is that the Justice Department must prosecute Epstein’s accomplices – anything less is a failure of justice. Two names were repeatedly mentioned by the women: Ghislaine Maxwell and Sarah Kellen. But the powerful royalty, lawyers and Wall Street titans who have been accused of being part of Epstein’s ring and participating in sexual assaults of underage girls must also be charged by the perpetually recalcitrant U.S. Justice Department.

The court hearing was called at the request of Federal prosecutors in order to dismiss the case against Epstein since they can’t prosecute a dead man. Epstein was found deceased in his jail cell in Manhattan on the morning of Saturday, August 10. He was awaiting trial on new charges brought by the Justice Department in July of 2019 based on evidence the Justice Department and FBI had been sitting on since 2006 – thus allowing Epstein and his elitist pals to sexually assault more young women for an additional 13 years.

The Metropolitan Correctional Center where Epstein was housed is a Federal facility run by the Bureau of Prisons, which is part of the U.S. Department of Justice. Despite the Justice Department having a 53-page indictment sitting in its files since 2008 that indicated Epstein was a critical witness to unravel the powerful people involved in his sex ring, the Justice Department’s Bureau of Prisons negligently allowed Epstein to die while in their custody: making the death seem more like a feature than a bug of the process.

The New York City Medical Examiner’s office has ruled the death a suicide. Unfortunately, New York City has a reputation for calling suspicious deaths suicide, even when the person falls from a short six-story building and even when the knife that made the fatal wound is found underneath the body: Too many homicides and it looks bad for the New York City police commissioner and tourism in Manhattan. The new quip in New York is that the decedent has been “suicided.”

Even Epstein’s powerful criminal defense attorney, Reid Weingarten of corporate law firm Steptoe & Johnson, expressed skepticism in court yesterday about the official cause of death and asked the Judge to conduct an investigation. The U.S. Attorney General, William Barr, has already asked the Justice Department’s Inspector General to investigate. But since the pivotal piece of evidence that could shed light on the matter, the video tape from the hallway outside Epstein’s jail cell, has been either erased or rendered indecipherable in some other manner under the negligent care of this Federal facility, the prospects aren’t looking good for that investigation either. (If you start to notice a pattern of failed investigations at the hands of the various units of the U.S. Department of Justice, it means you’re paying attention.)

Weingarten said that Epstein’s death was the real elephant in the room yesterday. He was wrong. The real elephant in the room is why the U.S. Department of Justice, the highest law enforcement agency in the United States with a $28 billion annual budget, which has jurisdiction over 30,000 FBI personnel with their own $9.6 billion budget, hasn’t brought charges against Epstein’s fellow sex traffickers and recruiters in the 13 years it’s had the case, after it was handed it on a silver platter.

The Palm Beach, Florida Police Chief, Michael Reiter, handed a deeply investigated case over to the FBI in July of 2006 according to the courageous reporting of Julie K. Brown in the Miami Herald in November of last year. Brown further reports that in November of 2006, “The FBI begins interviewing potential witnesses and victims from Florida, New York and New Mexico.” It took just eight months of FBI interviews for the U.S. Attorney’s office to have a 53-page Federal indictment ready to file against Epstein involving sexual assaults against multiple underage girls. But the indictment was never filed. (Read the sordid details of how the case was corrupted by the leading U.S. Attorney for the Justice Department, Alex Acosta, in the Miami Herald here.)

A laughable joke of a deal was worked out by Acosta and Epstein’s high-powered lawyers where federal charges were dropped against Epstein and he was allowed to plead guilty to only Florida state charges: one count of soliciting sex from a minor and one count of soliciting sex from an adult woman. Epstein was able to serve just 13 months in jail, where he was given a work release program to sit in a fancy office 12 hours a day, driven there daily by his private chauffeur in his comfy limousine.

The deal was sealed in such a way that it denied his victims knowledge of what went down. In February of this year, a federal judge ruled that the secrecy of the deal violated the federal Crime Victims’ Rights Act.

Had it not been for the public outrage unleashed as a result of the series of articles in the Miami Herald and its emotionally-gripping personal video interviews with Epstein’s victims, the Justice Department would have likely never brought the new case at all in July of this year.

We say that with good reason. A full two years before the Miami Herald published its seminal series on Epstein, the bestselling author, James Patterson, together with John Connolly and Tim Malloy, released a detailed investigative book on Epstein titled “Filthy Rich” in October of 2016. It covered Epstein’s sexual assaults on young girls and the corrupted process involving the Justice Department that got him off the hook for his serial crimes. Patterson included a July 24, 2006 letter that Palm Beach Police Chief Michael Reiter sent to the parents of a young girl who had accused Epstein of assaulting her when she was 14. Reiter wrote to the parents:

The FBI decided to stand down and allow the co-opted deal cooked up by Acosta and Epstein’s attorneys to play out instead.

It has been 13 long years since the FBI and U.S. Department of Justice have been sitting on this case. If they are to restore any shred of trust and credibility in themselves as Federal law enforcement agencies funded by U.S. citizens to protect U.S. citizens, we need to see indictments against Epstein’s accomplices and the powerful and rich men who were willing participants in Epstein’s international sex ring.