Shhh! Don’t Tell the Public There Was a Frightening “Glitch” in Stock Markets Yesterday 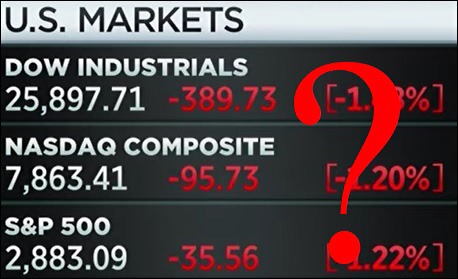 Nightly Business Report Had to Guess Where the U.S. Stock Market Closed on August 12, 2019

Where did the U.S. stock market actually close yesterday? It’s pretty much an open question. To give you an idea of just how bad the so-called “glitch” was yesterday, Bill Griffeth, the co-anchor of the CNBC show, the Nightly Business Report, had to deliver this warning to his viewers before reporting the prices of the closing stock market indexes yesterday.

“By the way, toward the close, there was a technical issue with trading computers. It’s not clear if all of the volume was reported or if some of the prices of the indexes were affected. You might see different numbers elsewhere but these were the numbers we had of the close today.” (See video below of the program.)

The Consolidated Tape Association (CTA) began reporting technical problems at 3:15 p.m. At 3:19 p.m. the CTA reported that it was switching its system to its Disaster Recovery Site/Secondary Data Center. The problems lasted into the evening.

The Dow Jones Industrial Average (Dow) had been in a sharp decline with losses of over 400 points when the “glitch” began. But rather than continuing on that downward path, once traders were unable to see or evaluate where the stock market was actually trading, the Dow stopped tanking.

The largest Wall Street banks were also getting pummeled when the glitch occurred but stabilized into the close. The big loser of the day among the biggest Wall Street banks was Morgan Stanley which shed 2.75 percent, followed by Citigroup which closed down 2.74 percent. Goldman Sachs gave up 2.60 percent while Bank of America closed with a loss of 2.44 percent. JPMorgan Chase registered a less severe decline of 1.88 percent by the closing bell.

But there’s a big problem with the accuracy of those bank stock prices.  According to Bloomberg data charts as of 9 a.m. this morning, it still has no volume data for what occurred in the stocks of Citigroup, Goldman Sachs and Bank of America yesterday between 3 p.m. and 3.45 p.m. In the case of Morgan Stanley, volume data is missing from 3:16 p.m. to 3:30 p.m.

The Consolidated Tape Association had this to say yesterday about that missing volume data:

“Please note, however, that due to the technical issues that occurred today, certain statistics (i.e., daily symbol volume counts) may not be correct in the End of Day Summary message stream.”

Let’s just say, hypothetically, that if someone wanted to stop hedge funds from shorting the market and driving the prices of stocks lower, one way to do that is to put a blindfold on short traders as to where the market actually is trading and to render it impossible to gauge how much sell-side volume there is going to be heading into the close.

The disruption in the Consolidated Tape System did precisely that.

That’s the official story on what happened yesterday. But a review of a popular forum for Vanguard mutual fund investors shows there was a far bigger problem than what the Consolidated Tape Association is reporting. Vanguard investors posted that some of their funds were showing a one-day loss of as much as 56 percent. Another commenter wrote that his TDAmeritrade account which held a 403b retirement fund through Vanguard, was showing a one-day loss of 127.60 percent. Another said that his small brokerage account was showing a market value of $26 million.

Those kinds of problems cannot be explained by a delay in trade data reporting to the Consolidated Tape Association.

Vanguard posted the following statement on the issue on its Twitter page yesterday:

“The market-wide pricing issues impacted the initial prices shown on our website as well as other pricing sources. We’re working to publish the corrected prices and are sorry for the inconvenience.”

Getting honest answers to what really happened yesterday is highly unlikely because the stock market of the United States, once the envy of the world, is now a hodgepodge of Dark Pools and dark corners. You don’t have to take our word for that, Brett Redfearn, the Director of the Division of Trading and Markets at the Securities and Exchange Commission, said in a June 3 speech that the U.S. stock market structure now consists of 13 stock exchanges versus 32 Dark Pools – mostly run by the big Wall Street banks and their global counterparts like UBS, Credit Suisse and Deutsche Bank. Redfearn explained further:

“Instead of a trading floor in Manhattan, the locus of exchange trading is now largely in suburban data centers in places like Mahwah, Secaucus, and Carteret, New Jersey. These data centers contain rows and rows of server racks, and vital trading advantages can go to those trading firms that have their machines ‘co-located’ in these racks. In addition, exchanges now sell a spectrum of data products and connectivity services in their data centers that have helped fuel a low-latency arms race. These include proprietary data products with expansive trading information, as well as low-latency connectivity services, such as 40 Gb cross-connects and microwave transmission of data among geographically dispersed data centers. These data products and connectivity services can shave crucial microseconds off of the latencies of competing brokers and trading firms.”