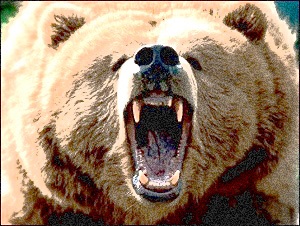 If you are long stocks, this is one of those mornings when you may be tempted to pull the covers over your head and take a mental health day away from financial news.

As of 8:44 a.m. this morning, Dow futures were registering a plunge of 394 points; the big Wall Street bank stocks were down about 3 percent in pre-market trading; news was out in the Eurozone that its largest economy, Germany, had contracted by 0.1 percent in the second quarter. Eurostat further dampened the outlook with a report that “in June 2019 compared with May 2019, seasonally adjusted industrial production fell by 1.6% in the euro area (EA19) and by 1.5% in the EU28.”

The drumbeat of bad economic news led to a flight to safety into U.S. Treasuries, with the 30-year Treasury Bond reaching an all-time low of 2.015 percent early this morning. It is nothing short of remarkable that in 2008, with iconic century old firms on Wall Street dropping like flies, that the 30-year Treasury did not reach the low yield it reached today; it traded at 2.89 percent on January 12, 2009 but has continued to plumb new lows since then, reaching 2.29 percent on July 18, 2016.

These unprecedented low yields, given that the Federal Reserve secretly pumped $29 trillion into the Wall Street banks and their global counterparts during and after the 2008 financial crash and that the U.S. government has pumped trillions of dollars more in fiscal stimulus into the economy since then, are adding to the wave of concerns among investors.

Unnerving the markets further is the report from Bloomberg News yesterday that Federal regulators are planning to ease restrictions on the ability of the Wall Street mega banks – the same ones that are plunging in price this morning – to return to full-blown gambling casinos and make bets for the house (in polite circles called proprietary trading). The Dodd-Frank financial reform legislation of 2010 was supposed to have nipped that in the bud under the so-called Volcker Rule, but somehow regulators never actually got around to fully implementing the rule in any real sense.

Now the rule, that really never was, appears set to be gutted. Bloomberg writes that “Regulators responsible for the Dodd-Frank Act rule are set to approve revisions next week. The changes will loosen restrictions on banks investing their own money in private equity and hedge funds, according to the people, who requested anonymity because the process isn’t public.”

Their own hedge funds blowing up deepened the crisis at Bear Stearns and Citigroup. One of Citigroup’s internal hedge funds lost 53 percent in a month while another that had been peddled as safe and secure to retirees, lost 80 percent of its money.

Unfortunately, when mega banks that own giant Federally-insured commercial banks peddle investments that collapse, like their own proprietary hedge funds, it takes a serious reputational toll on the whole bank. That results in their share price tanking and customers pulling their money, leading to an eventual run on the bank. In other words, a replay of 2008.

That Federal regulators would allow the Wall Street mega banks, that hold the majority of Federally-insured deposits in this country, to travel back down this same preposterous road again can’t be inspiring any sense of confidence in Washington or Wall Street or the sanity of U.S. markets.