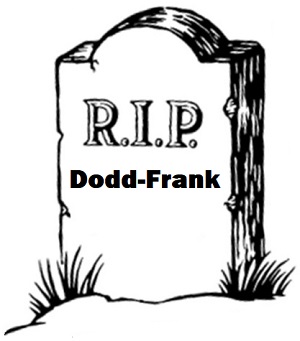 Yesterday the Office of the Comptroller of the Currency, the regulator of national banks, and the FDIC, which provides the taxpayer-backstopped Federal insurance to deposits at these banks, announced that they were going to “simplify” the Volcker Rule. Under the Trump administration, “simplify” is code for “gut.”

The Volcker Rule was part of the 2010 financial reform legislation known as Dodd-Frank. It outlawed deposit-taking banks from using those deposits to make wild gambles for the house, known as proprietary trading. It also required the banks to end their ownership of hedge funds and private equity funds where the banks can secretly dump losing positions or hide enormous losses in hard to price instruments.

Wall Street hated the Volcker Rule so much that it made sure the rule never came into being. It has stonewalled the implementation of the rule for nine years and one month. Now the rule has been stripped of all of its meaningful components.

The gutting of the Volcker Rule was snuck through in the dog days of summer as families are busy getting kids ready to return to school. Five years ago, as families were busy preparing for the Christmas holidays, Citigroup’s lobbyists pushed through the repeal of the second most important aspect of Dodd-Frank. It was called the “push-out” rule which would have forced banks to move their tens of trillions of dollars in derivatives out of the Federally-insured bank unit into another unit that could be placed into bankruptcy or wound-down in the event of insolvency.

By keeping these dangerous derivatives in the Federally-insured bank, Wall Street effectively guaranteed itself another bailout if it blew up the U.S. economy again.

Vox explained on December 17, 2014 how the dirty deal on the “push-out” rule went down:

“Not surprisingly, Citigroup, which was responsible for writing the bill, led the way with 30 lobbying reports mentioning H.R. 992, followed by the American Bankers Association at 17 reports, Principal Financial Group at 13, the U.S. Chamber of Commerce and the Securities Industry and Financial Markets Association (SIFMA) at 12, and JP Morgan and Bank of America at nine.

Citigroup had become insolvent in 2008 and had lied about its exposure to subprime debt. Instead of it being wound down by the government, it received the largest bailout in U.S. history with over $45 billion in taxpayer funds infused as equity and an additional $2.5 trillion in secret, low-cost loans from the Federal Reserve. What it did in 2014 was to effectively gut the very legislation that was designed to prevent it from going rogue again.

Senator Elizabeth Warren led the outcry in 2014, delivering three impassioned speeches on the Senate floor, appealing to members of Congress to strip the Citigroup lobbyists’ provision from the must-pass government spending bill to which it was attached. (See video below.) Despite her appeals, the provision passed. Then, and now, too many members of the U.S. Congress are terrified of getting on the wrong side of Wall Street.

The outcry came swiftly yesterday from public interest groups and watchdogs over the gutting of the Volcker Rule. Gregg Gelzinis, policy analyst for economic policy at the Center for American Progress, released the following statement:

“The Volcker rule was established to reorient banks toward serving businesses and households instead of taking swing-for-the-fences trading bets with taxpayer-backed deposits. Today’s finalized revisions to this pillar of financial reform severely undermine that core principle.

“The final rule narrows the trading activity covered by the Volcker rule and waters down or eliminates critical regulatory protections designed to prevent banks from abusing exemptions for hedging, market-making, and other permitted activities. As a result, Wall Street banks will be able to exploit these changes and engage in the type of high-risk proprietary trading that the Volcker rule was explicitly intended to prohibit. The revisions represent a forceful endorsement of the dangerous philosophy of Wall Street self-regulation.

“Gutting the Volcker rule will generate more risk in the banking system, just as other deregulatory changes to capital requirements, liquidity rules, stress tests, and living wills would weaken banks’ ability to safely handle risk. Taxpayers, workers, and families will again foot the bill when this toxic mix goes south.”

“The Volcker Rule is a cornerstone of Wall Street reform that Congress passed in the wake of the 2008 financial crisis to prevent federally-insured, deposit-taking banks from engaging in risky, speculative activities, like owning hedge funds and private equity funds, on the backs of the American taxpayers. I am deeply concerned by today’s FDIC and OCC actions, and potential additional votes by other regulators, to weaken this critically important rule….”

“Champagne corks are no doubt popping on Wall Street today as the most dangerous too-big-to-fail banks celebrate what will be their biggest victory since being bailed out during the 2008 financial crisis: the gutting of the Volcker Rule ban on propriety trading.  That will be great for Wall Street bonuses, but tragic for taxpayers…

“The Volcker Rule was supposed to ban high-risk proprietary trading, which is bankers placing bets with other people’s money.  When those bets won in the past, the bankers kept the winnings.  But when they did not, they shifted losses to the bank and taxpayers.

“That upside down ‘heads I win; tails you lose’ compensation scheme incentivizes bankers to make the biggest bets in hopes of getting the biggest bonuses. That’s how Morgan Stanley lost more than $9 billion on a single proprietary bet in December 2007, at the same time it was hemorrhaging losses due to subprime lending and derivatives.

“Huge losses due to proprietary bets, derivatives gambling and reckless subprime lending were the primary causes of the 2008 crash and led to the failure or near-failure of Wall Street’s biggest banks, including Morgan Stanley, Goldman Sachs, Citigroup, Merrill Lynch, Bank of America and many more.  Every one of those banks had to be bailed out with trillions of dollars of taxpayer money and other government rescue programs. Remarkably, those are the very same banks that will benefit from the gutting of the Volcker Rule….”

In 2008 and 2009, Wall Street did what no foreign terrorist group has ever done on U.S. soil. It blew up century-old financial institutions; it collapsed the U.S. housing market; it put millions of Americans out of work; and despite its criminal role, it was able to get a secret $29 trillion bailout from the Federal Reserve – the Federal regulator who had allowed the dangerous activities of these banks to go unchecked.

By being both the regulator of the banks and their secret savior – with the ability to create trillions of dollars in bailout loans with the press of an electronic button – Wall Street never paid for its crimes. In fact, it used the bailout funds to hand out billions of dollars in bonuses across Wall Street in the midst of the worst economic downturn since the Great Depression.

Dodd-Frank “reform” enshrined the Federal Reserve as the regulator of the biggest Wall Street bank holding companies, even though Congress knew that it was a failed regulator. Dodd-Frank “reform” failed to stop Wall Street from buying its credit ratings from S&P, Moody’s and Fitch. Dodd-Frank reform failed to stop Wall Street banks from trading stocks in their own Dark Pools. Its derivatives reform was gutted by Citigroup in 2014 and now the Volcker Rule has been gutted to meaninglessness.

The only thing that will permanently rein in Wall Street is to fully restore the Glass-Steagall Act. (See Dodd-Frank Versus Glass-Steagall: How Do They Compare?)