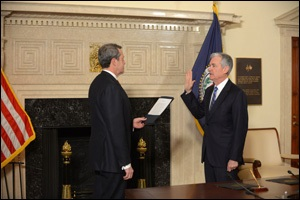 What good is being the President of the most powerful nation on earth if you can’t humiliate people on Twitter and fire them if they refuse to do your bidding (even if the law mandates their independence from politics.) This appears to be the thinking of Donald Trump, the sitting President of the United States. The Chairman of the Federal Reserve, Jerome Powell, is the latest person to come into the President’s cross-hairs.

Yesterday, Bloomberg News broke the story that “In February, the White House counsel’s office examined the legality of stripping Powell of his chairmanship and leaving him as a Fed governor.” The review of Trump’s legal options occurred “as the president repeatedly expressed public frustration with the Fed’s interest-rate increases,” according to the article.

In an interview with the Washington Post last November, Trump said he was “not even a little bit happy” with Powell, adding that “I’m doing deals and I’m not being accommodated by the Fed…They’re making a mistake because I have a gut and my gut tells me more sometimes than anybody else’s brain can ever tell me.”

Today, Powell will hold a press conference at 2:30 p.m. following the 2:00 p.m. statement from the Federal Open Market Committee (FOMC) on the Fed’s interest rate action and future outlook. Expect lots of questions from reporters on whether the Fed’s legal department thinks the President has the power to fire the Chairman of the Fed.

According to Section 10 of the Federal Reserve Act of 1913, which created the Federal Reserve, a member of the Fed’s Board of Governors, including the Chair and Vice Chair, can only be removed “for cause.” Powell has previously indicated that he plans to serve out his four-year term as Chairman, despite the bullying from the President.

Powell was a sitting Governor on the Federal Reserve when Trump nominated him for the Chairmanship. Powell was confirmed by the Senate on January 23, 2018 and sworn in to the Chairmanship on February 5, 2018. That means he would serve as Chair until 2022. Even if Trump could win in the court of public opinion to demote Powell, or win in a court of law, Powell would continue to have a vote on interest rates as a member of the Fed’s Board of Governors. His term in that position does not end until January 31, 2028.

Currently, the FOMC has only 10 voting members because there are two vacant seats on the Federal Reserve Board of Governors. That’s because Trump’s picks for the job keep falling by the wayside after unflattering vetting by the press. Stephen Moore and Herman Cain being the latest two such examples.

Clarida and Quarles were both Trump nominees and have voted in sync with Powell since they were sworn in. Unanimous votes among the members of the FOMC are the norm.

Even if Trump could intimidate his appointees on the Fed’s Board of Governors to vote to his liking, he has no power over the Presidents of the Federal Reserve banks. They are selected by their own Boards. The Board of the Federal Reserve Bank of New York is heavily influenced by Wall Street banks, which also want lower interest rates to keep their stock and derivative bubbles going. The New York Fed, curiously, has had a permanent vote on the FOMC since its inception. (See New Documents Show How Power Moved to Wall Street, Via the New York Fed and Sullivan & Cromwell’s Rodge Cohen: The Untold Story of the Fed’s $29 Trillion Bailout.)