Lordy, Deutsche Bank Is Having a Helluva Bad Month 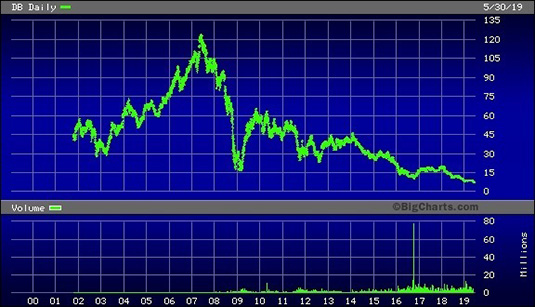 Thanks to former FBI Director James Comey, there are now acceptable times when the 19th century word “Lordy” can be demonstrably exclaimed in public settings. For example, it can be used with pretty much anything to do with the President of the United States or, as we are now suggesting, when referring to the management of Trump’s serially-charged banking establishment, Deutsche Bank.

After setting an historic intraday low of $6.82 yesterday on the New York Stock Exchange, shares of Deutsche Bank mustered a tiny rally in the last half hour of trading today to eke out a close of $6.91. Just 12 years ago, this was a $120 stock. The bank now has a market capitalization of $14.18 billion supporting assets of $1.6 trillion. (Perhaps “supporting” is not the right word. Lordy!)

According to the bank’s 2018 annual report, it also has a derivatives book of $49 trillion notional (face amount). Deutsche Bank’s derivatives book was of such a concern to the International Monetary Fund that it issued a 2016 report which found that Deutsche Bank was heavily interconnected to JPMorgan Chase, Citigroup, Goldman Sachs, Morgan Stanley and Bank of America as well as other mega banks in Europe. The IMF wrote that Deutsche Bank posed a greater threat to global financial stability than any other bank as a result of these interconnections – and that was at a time when its market capitalization was tens of billions of dollars larger than it is today.

Worse still, the headlines the bank has generated in recent years suggest a crime syndicate at work. Last November, its Frankfurt, Germany offices were raided by 170 members of law enforcement in what is believed to be a money laundering probe. In 2017, the bank was fined a total of $630 million by U.S. and U.K. regulators over claims it had laundered billions of dollars out of Russia. That same year the bank settled with the Justice Department and other Federal regulators for $7.2 billion for selling toxic mortgage-backed securities to investors. In 2015 Deutsche Bank paid a total of $2.519 billion to the U.S. Justice Department and other regulators for its role in rigging the interest rate benchmark known as Libor.

And the bad news has been ratcheting up over the past month. On May 19 the New York Times’ David Enrich dropped the bombshell report describing how a Deutsche Bank whistleblower, Tammy McFadden, and four of her colleagues, had their efforts blocked by the bank when they tried to file suspicious activity reports on bank accounts affiliated with Donald Trump and his son-in-law/advisor Jared Kushner. Those suspicious activity reports should have gone to the Federal agency that oversees potential money laundering activity, the Financial Crimes Enforcement Network or FinCEN. Instead, they were quashed by a unit of the bank that manages money for the super wealthy.

Last week a Federal judge in New York rejected Trump’s attempt to block Deutsche Bank from complying with two House committees’ subpoenas to turn over his banking records. Deutsche Bank’s delivery of those documents has now been put on hold while Trump appeals the ruling.

On Tuesday of this week, Will Fitzgibbon, writing for the International Consortium of Investigative Journalists, reported on how the Deutsche Bank subsidiary, Regula Ltd., which is at the center of a new money laundering probe, “helped shield the identities and machinations of the world’s rich and powerful.”

The biggest question right now in the markets is what kind of contagion Deutsche Bank might spread to the other global banks that are counterparties to its derivative trades. Today, for example, as it closed in the red, so did JPMorgan Chase, Citigroup, Goldman Sachs, Morgan Stanley and Back of America, despite the Dow Jones Industrial Average closing up by 43.47 points.