All of a Sudden, Fixing American Capitalism Is on Everybody’s Mind 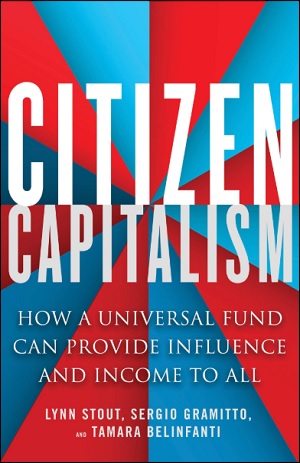 Wall Street, the epicenter of American capitalism, brought down economies around the globe in 2008, including a banking, housing and foreclosure crisis in the U.S. Why is it just now that fixing American capitalism is on everybody’s mind? One answer is that it will be a central focus in the 2020 presidential campaign while a more nuanced reading is that the current dystopian billionaire administration has everyone grasping for answers as to how we got here.

Harper’s magazine did make a valiant effort to look at the problem at the height of the financial crisis in November 2008 with seven essays on how to fix American capitalism. But the public at that time was more focused on keeping their jobs, a roof over their heads and pulling what little funds they had left from sinking mutual funds and teetering banks. Then the Obama administration convinced a lot of people that the Dodd-Frank financial reform legislation of 2010 was going to be the fix to put American capitalism back on a solid path. The legislation, of course, was written by the lawyers for the one percent and was simply meant to placate the pitchfork folks so that Wall Street could continue to loot behind the scenes with the help of the Federal Reserve and its secret $16.1 trillion loan program. That secret loan program, by the way, did not go to the people losing their homes but to the very banks that were taking those homes through tricked-up mortgages.

Channeling Harper’s in 2008, last week Bloomberg News (owned by another billionaire beholden to Wall Street we should mention) rolled out its own version of “Seven Fixes for American Capitalism,” also providing the views from seven different authors. One of the best ideas comes from Carolynn Look, who suggests that the U.S. adopt the German model to structure corporate boards. Look writes:

“A law that took effect in 1976 formalized what had been common practice at many German companies as far back as the 1920s. It dictates that in a corporation with more than 500 employees, a third of supervisory board seats must be filled by directors elected by workers, a share that rises to one-half for companies with more than 2,000 employees.

“The German system, known as co-determination, allows employees to have a say in working conditions, such as contractual terms and pay. It also gives them a voice in how profits are deployed—say, for a new research and development center vs. more dividends for shareholders. Some researchers say co-determination has helped spur productivity and innovation at German companies.”

The new buzz on how to fix the deplorably broken system of capitalism in America got underway in August when Senator Elizabeth Warren, now a 2020 presidential candidate, introduced the “Accountable Capitalism Act.” Warren explained the problem as follows:

“Because 84% of American-held shares are owned by the top 10% of our richest households, while more than 50% of American households own no stock at all, corporate America’s commitment to ‘maximizing shareholder return’ is a commitment to making the richest Americans even richer at all costs. There is an urgent need to return to the era when American corporations produced broad-based growth that helped workers and shareholders alike.”

Warren’s legislation has excellent components, including the creation of a Federal charter for corporations which could be revoked if the corporation serially engages in illegal conduct. One fatal flaw in Warren’s plan is that the charter could only be revoked upon application by a State Attorney General. If the corporation is a large employer in the state, that pretty much means the State Attorney General is going to do nothing to put it out of business. One only needs to look at the long-running crime spree at Citigroup and JPMorgan Chase to know we’re correct in that assessment.

Against this backdrop comes a new book – Citizen Capitalism: How a Universal Fund Can Provide Income and Influence to All. One of the authors is the legendary Wall Street legal scholar, Lynn Stout, who sadly passed away in April of last year. The two other co-authors are Tamara Belinfanti, a professor at New York Law School who co-founded with Stout in 2015 The Ethical Shareholder Initiative, a nonprofit focused on creating more sustainable capital markets; and Sergio Gramitto, an Assistant Law Professor at Cornell Law School.

We remember Lynn Stout as one of the first to blow the whistle on the rigged IPO market of the 1990s – which led to the epic dot.com bubble and bust of 2000. In 1994, BusinessWeek published an article, “Beware the IPO Market,” which quoted Stout, then a professor of securities regulation at Georgetown University Law Center. Stout stated: “The IPO market is rigged. It’s rigged against the average investor.” Stout went on to explain that the penalty bid was “devised by a group of top Wall Street firms during Securities Industry Association meetings in the 1980s.” Effectively what was going on, says Stout, is that Wall Street’s large, lucrative institutional clients are allowed to cash out when the stock price soars while the little guys are left “holding the bag” and serving as a prop under the price of the shares.

This benign-sounding phrase, “penalty bid,” was effectively one of the greatest wealth transfer mechanisms ever created by Wall Street. It ended with $4 trillion in losses to the suckers left holding the bag.

The key idea behind the new book, Citizen Capitalism, is the following: The creation of a Universal Fund, which would be similar to a mutual fund with a few key differences. Each U.S. citizen, age 18 or older, would receive one share in the fund. The fund would acquire a portfolio of stocks in different corporations through donations from the corporations and wealthy individuals. The citizens would receive the cash from the dividends throughout their lifetime but would not be able to sell or trade their shares. When the citizen dies, their share would return to the fund. The Universal Fund would not be allowed to trade its shares so it would have no interest in seeking short-term profits. The Universal Fund would use a nonprofit proxy advisor to vote its shares, reflecting the will of its citizen shareholders.

Here’s one passage in the book where we have a major quibble:

“Several factors indicate that if a Fund were created, donations would be likely. First, if legislation was passed making donations to the fund tax-deductible, donors could enjoy tax deductions. This would be especially important for attracting corporate donations. Consider the fact that corporations already purchase $400 to $600 billion of their own shares every year. If those shares were donated to the Fund instead of retired, these corporations could claim tax deductions worth $100 billion or more annually.”

Our quibble is this: corporations are buying back their stock for the very purpose of retiring it from public trading in order to artificially inflate their profits per share. If the stock is not retired, but instead handed over to the Universal Fund, it is still a publicly traded share that is entitled to a share of profits and dividends. CEOs and top corporate management are awarded their obscene bonuses and stock options based on how they grow the corporation’s profits. That provides a hefty incentive to buy back stock, retire it, and inflate profits to line their own pockets.

In addition, the best game in town is for the buybacks to be made in the Dark Pools of the big Wall Street banks. That’s a nifty device to prop up the share prices when negative news brings on a wave of selling.

Then there is the problem of the Universal Fund misconstruing how the payment of dividends to its shareholders would improve the current situation. One example cited in the book is that after the Fund reached a $3 trillion portfolio value, it would begin distributing its dividends which could, potentially, generate $300 of income to each citizen who registered to be a shareholder.

With a taste of free money, what is to stop that shareholder (like the current one-percent shareholders) from wanting to hold down wages to workers, skimp on reinvestment in physical plant and innovation, in order to receive higher cash dividends. The danger is that the Universal Fund shareholder begins to think that what’s good for the corporation’s profit growth is good for me. This sounds a lot like George W. Bush’s “ownership society,” which was modeled off of the Pinochet model in Chile. (See Wall Street’s Collapse and the Ownership Society.)

The problem with all of these simple-fix ideas for repairing American capitalism is that they focus on treating the symptoms rather than the disease. The disease is a corrupt Federal campaign finance system that allows the lawyers for the one percent to take over the presidential transition team and put puppets for the corporations (owned by the one percent) in the key spots in the cabinet, Wall Street regulatory agencies and the U.S. Justice Department. Sound Federal legislation and anti-trust enforcement also isn’t happening because the campaign financing system is putting compromised men and women in Congress.

Democrats and progressives need to stop deluding themselves that the Obama administration wasn’t corrupted by campaign cash. It certainly was. (See here, here, here and here.)

Time is running out for the country to get its capitalist house in order before Wall Street, the epicenter of the rot and corruption, brings on another epic financial collapse.