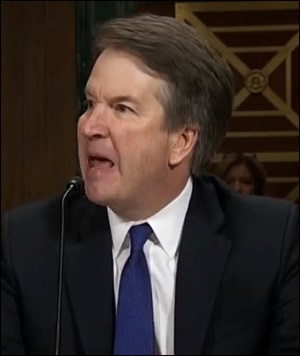 An Angry and Belligerent Brett Kavanaugh Testifies Before the Senate Judiciary Committee on September 27, 2018. Multiple Former Yale Classmates Say He Perjured Himself.

Editor’s Note: On June 18, 1991, when I was managing money for individual clients at a Wall Street firm, a client told me that Bernie Madoff had been guaranteeing him, and other members of his Long Island country club, 13 percent annual returns on the stock portfolios Madoff managed for them – and had been delivering those returns for about 15 years. It was then, as it is today, a serious violation to promise guaranteed returns on a stock portfolio for the obvious reason that markets can experience serious losses within any one year and negative returns in multiple years. I told my client this and suggested that a person willing to ignore a well known prohibition against promising investors guaranteed stock returns is highly likely to be lying about bigger things. I suggested to this client that Madoff was likely running a Ponzi scheme and strongly urged him to get his money away from Madoff and warn his fellow country club members. At the time, I had no idea that Madoff was scamming more than just members of this one country club. After Madoff confessed to his sons and they turned him in to the FBI in 2008, his international Ponzi scheme became a national scandal which has tarnished the reputation of the SEC to this day.  The public learned that Harry Markopolos, a financial expert, had been sending detailed written reports to the SEC for years (in 2000, 2001, 2005, 2007 and 2008), making the case that Madoff was running a Ponzi scheme. The SEC ignored those repeated credible warnings — likely because Madoff was an important man on Wall Street by then. (See our report here on how SEC lawyers who tried to take on powerful men or firms on Wall Street were sidelined or fired by the SEC.)

The print edition of today’s New York Times carries an OpEd by former FBI Director James Comey on Brett Kavanaugh, whose nomination to the U.S. Supreme Court is under a growing cloud of uncertainty. One particular sentence in Comey’s opinion piece caught our eye. It speaks to how trained FBI agents will look at the obvious lies Kavanaugh told the Senate Judiciary Committee about what he had written in his yearbook, where he falsely claimed obvious sexual remarks meant something else. Comey said FBI agents “know that little lies point to bigger lies. They know that obvious lies by the nominee about the meaning of words in a yearbook are a flashing signal to dig deeper.”

Americans should not take Comey’s word that the FBI will, in fact, dig deeper. The FBI has had six previous opportunities to “dig deeper” when it conducted background checks on Kavanaugh and it did not do so.

Multiple mainstream media outlets reported over the weekend that the scope of the new FBI investigation into Kavanaugh has been restricted by Senate Republicans working with Don McGahn, the White House Counsel, who is the same man who has spearheaded Kavanaugh’s nomination this far. According to those reports, the FBI has a limited witness list it is allowed to contact and that doesn’t include Julie Swetnick, a woman who has signed a sworn affidavit that was submitted to the Senate Judiciary Committee accusing Kavanaugh, and his friend, Mark Judge, of aiding and abetting the gang rape of women in high school.

Swetnick also states in her affidavit that she is “aware of other witnesses who can attest to the truthfulness” of her allegations. If the FBI doesn’t interview Swetnick and her corroborating witnesses, it’s putting its reputation in the same league with the SEC when it refused to investigate the credible allegations of Harry Markopolos against Madoff. It should also be noted that despite President Trump’s outrageous demeaning of Swetnick to reporters on camera, she has previously passed background checks of her own and obtained security clearances in her prior work for the U.S. government.

As for little lies and big lies by Kavanaugh, two separate females who attended Yale at the same time as Kavanaugh have appeared on television to say that Kavanaugh lied under oath to the Senate Judiciary Committee when he testified that he did not drink to excess. Those women are Liz Swisher and Lynne Brookes, a Republican.

The New York Times’ digital edition carries another statement today, this time from a male classmate of Kavanaugh while he was at Yale who is now a college professor in North Carolina. The professor, Chad Ludington, writes as follows in his statement:

“In recent days I have become deeply troubled by what has been a blatant mischaracterization by Brett himself of his drinking at Yale. When I watched Brett and his wife being interviewed on Fox News on Monday, and when I watched Brett deliver his testimony under oath to the Senate Judiciary Committee on Thursday, I cringed. For the fact is, at Yale, and I can speak to no other times, Brett was a frequent drinker, and a heavy drinker. I know, because, especially in our first two years of college, I often drank with him. On many occasions I heard Brett slur his words and saw him staggering from alcohol consumption, not all of which was beer. When Brett got drunk, he was often belligerent and aggressive. On one of the last occasions I purposely socialized with Brett, I witnessed him respond to a semi-hostile remark, not by defusing the situation, but by throwing his beer in the man’s face and starting a fight that ended with one of our mutual friends in jail.

“I do not believe that the heavy drinking or even loutish behavior of an 18- or even 21-year-old should condemn a person for the rest of his life. I would be a hypocrite to think so. However, I have direct and repeated knowledge about his drinking and his disposition while drunk. And I do believe that Brett’s actions as a 53-year-old federal judge matter. If he lied about his past actions on national television, and more especially while speaking under oath in front of the United States Senate, I believe those lies should have consequences. It is truth that is at stake, and I believe that the ability to speak the truth, even when it does not reflect well upon oneself, is a paramount quality we seek in our nation’s most powerful judges.”

The FBI is on a course to lose the trust of the American people in the same way that the SEC has lost the public’s trust. Over the past week, Wall Street On Parade has reported on the powerful special interests that are hiding behind the dark curtain that engulfs the Kavanaugh nomination. (See related articles below.) That dark money and its insistence on keeping Kavanaugh as the nominee must also be investigated by the FBI in order to get at the full truth of what is going on.

The billions of dollars flowing from those special interests into lobbying and political campaign financing and nonprofit front groups who send out their talking heads to pervert the public discourse have tainted the public’s trust in Congress and in the Federal regulators and agencies that are supposed to be protecting the public interest.

Without a legitimate and thorough investigation by the FBI of Kavanaugh and the special interests that are backing him, the Supreme Court will join the rapidly decaying vestiges of American democracy.

Kavanaugh Hearing: Yes, There’s a Conspiracy; But It’s Not Coming from Dems

The Kavanaugh Nomination’s Money Trail Leads Back to Clarence Thomas