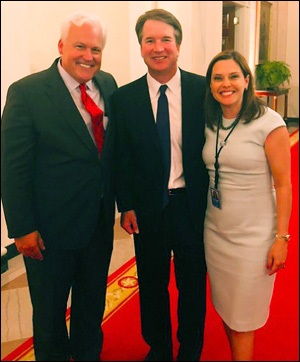 Mark Judge is a conservative writer who, until the sexual assault allegations surfaced against Supreme Court nominee Brett Kavanaugh, had an unremarkable career. Despite the unlikelihood that Judge has squirreled away the funds from this writing career to pay one of Washington D.C.’s top white-collar criminal defense lawyers to represent him, or the kind of credible history that would entice such a legal engagement, Judge has secured an expensive lawyer with a remarkable pedigree.

Judge is the pivotal witness that the FBI will want to interview following President Donald Trump’s announcement yesterday that he will reopen the FBI’s background investigation of Kavanaugh. Trump caved to pressure yesterday from Republican Senator Jeff Flake, the American Bar Association, the Yale Law School (Kavanaugh’s alma mater) and every Democratic Senator on the Senate Judiciary Committee who called for a reopened FBI investigation of Kavanaugh following multiple sexual assault allegations and college classmates stating on TV and to journalists that he lied under oath in the confirmation hearing on September 27. Dr. Christine Blasey Ford, the first Kavanaugh accuser to come forward, testified under oath on Thursday that Judge was in the locked room when Kavanaugh sexually assaulted her and joined with Kavanaugh in uproarious laughter as the assault occurred.

Judge is being represented by Barbara (Biz) Van Gelder of the law firm Cozen O’Connor. Van Gelder is listed in the 2019 The Best Lawyers in America and has previously represented high profile men in the George W. Bush administration, the same administration in which Kavanaugh served as counsel and staff secretary. 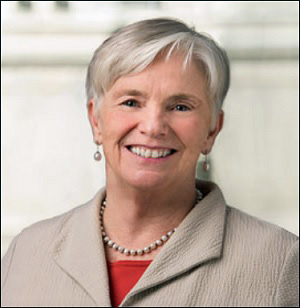 Prior to joining her current law firm on February 1, 2016, Van Gelder worked for Wall Street’s go-to law firm Morgan Lewis from September 2007 to May 2011; and now defunct corporate law firm Dickstein Shapiro from May 2011 to January 2016 where she was known as one of its rainmakers. From 1983 to 1997, Van Gelder worked as an Assistant U.S. Attorney in the Washington D.C. U.S. Attorney’s office, a regional branch of the U.S. Justice Department, the Federal agency that oversees the FBI. That will give Van Gelder major insights into how to handle the FBI’s probe of Mark Judge. Thus far, Van Gelder has simply written letters to the Senate Judiciary Committee indicating that her client has no recollection of the event alleged by Dr. Ford to the outrage of Democratic Senators on that Committee who are former prosecutors and have stated that their ability to cross examine Judge under oath is essential to any serious effort to get at the truth.

How would an expensive, top white-collar criminal defense lawyer find her way into the world of Mark Judge, who calls himself a “recovering alcoholic” and wrote a book titled: Wasted: Tales of a Gen-X Drunk, which details the years he spent at Georgetown Prep, the private high school in Northern Bethesda, Maryland where he and Kavanaugh were classmates and close friends.

One possible link between Van Gelder and Mark Judge is David Safavian, the Deputy Director of the American Conservative Union’s Foundation Center for Criminal Justice Reform. In 2004, Safavian held the position of Administrator for Federal Procurement Policy in the George W. Bush administration when he was arrested and charged with  giving lobbyist Jack Abramoff inside information about government-owned real estate that Abramoff wanted to acquire. His conviction in that case was overturned by the U.S. Appeals Court for the D.C. District and a new trial ordered. On December 19, 2008, Safavian was convicted of one count of obstructing an agency investigation and three counts of false statements. One of those charges was lying to an FBI agent. He received a one-year jail sentence.

Safavian’s lawyer was Barbara Van Gelder. His case should send a stark caution to Mark Judge if he has any intention of lying to the FBI.

Safavian’s current employer, part of the non-profit juggernaut the American Conservative Union, is chaired by Matt Schlapp, a previous lobbyist for Koch Industries, the fossil fuels conglomerate that has placed people from its nonprofit front groups throughout the Trump administration. (One of those key people is White House Counsel Don McGahn, who has been shepherding Kavanaugh through the nomination process and sitting behind him at every confirmation hearing.) According to the DeSmog Blog, the American Conservative Union “has historically opposed efforts that would limit carbon dioxide emissions for the purpose of combating climate change,” a major goal of Koch Industries and the front groups it funds.

Matt Schlapp’s wife, Mercedes Schlapp, is the director of strategic communications at the White House. Both are big cheerleaders for Kavanaugh. Matt Schlapp has been aggressively tweeting for Kavanaugh and making the rounds of cable news shows to try to push the confirmation forward.

“The annual Conservative Political Action Conference (CPAC) is still one of the ACU’s most prominent projects. CPAC bills itself as ‘the nation’s largest gathering of conservatives.’ It is a four-day conference that begins with an Activism Boot Camp, followed by three days of speakers and discussions to ‘unite the political leaders of the conservative movement with the people who make up the movement.’ CPAC speakers include conservative presidential candidates, elected officials, and media personalities…CPAC – as well as the ACU – has received a significant amount of support from the Koch network. In 2013, Koch Industries sponsored the ‘VIP Ronald Reagan Dinner Reception’ at CPAC in 2013. According to the CPAC website, Koch-affiliated organizations Concerned Veterans for America and the 60 Plus Association were sponsors of the event in 2015.”

The American Conservative Union has received significant funds in the past from a dark money nonprofit called the Wellspring Committee whose donors remain anonymous. Wellspring is also the major donor to another dark money nonprofit, the Judicial Crisis Network, which launched a multi-million dollar TV ad campaign in July to force through the nomination of Kavanaugh. The current ad that the Judicial Crisis Network is running during cable TV news programs has the same theme as the remarks that Brett Kavanaugh made in his unprecedented opening statement to the Senate Judiciary Committee this past Thursday.

The similarity of the content suggests there may be some kind of coordination between this dark money group and Kavanaugh, despite Kavanaugh stating at the outset of the hearing that he wrote his own remarks.

Kavanaugh stated at the hearing:

“…this whole two-week effort has been a calculated and orchestrated political hit, fueled with apparent pent-up anger about President Trump and the 2016 election. Fear that has been unfairly stoked about my judicial record, revenge on behalf of the Clintons, and millions of dollars in money from outside left-wing opposition groups. This is a circus.”

The right-wing, dark money group, the Judicial Crisis Network, states in the commercial it is currently running:

This is not the first time that Matt Schlapp has entered our radar at Wall Street On Parade. He was previously involved in a dark money nonprofit, Liberty Central, sluicing big bucks to Virginia Thomas, then wife of sitting Supreme Court Justice Clarence Thomas. (See our report: The Kavanaugh Nomination’s Money Trail Leads Back to Clarence Thomas.)

The FBI will hopefully do its homework on this matter, including the dark money that has been funneled into the nomination process and the thinly veiled threats tweeted against Republican Senators who might try to exercise independent judgement in the matter. If the FBI thoroughly does its job, we should be looking at a long-overdue public corruption probe next.

That expanded probe should examine an August 30 report in Politico, which indicates two of the very Senators who sit on the Senate Judiciary Committee, Lindsey Graham and Orrin Hatch, who are charged with looking at all evidence with an impartial, fair mind, have been part of Kavanaugh’s White House coaching team. Politico reports:

“Republican Sens. Lindsey Graham of South Carolina, Rob Portman of Ohio and Dan Sullivan of Alaska have all helped Kavanaugh practice and critique his performance, according to people familiar with the sessions. Another source said that Sen. Orrin Hatch of Utah — a former Judiciary Committee chairman — played the role of chairman in a mock hearing, which included GOP senators standing in for Judiciary members and zeroing in on topics that Democrats are expected to grill Kavanaugh about.”