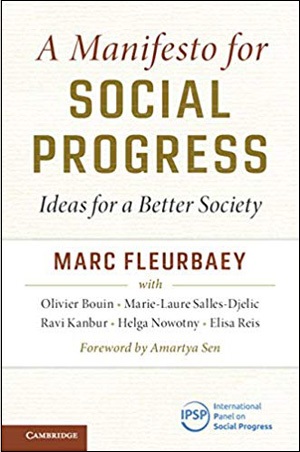 Wall Street On Parade has repeatedly called attention to the fact that President Donald Trump, who ran on a fiercely populist platform of helping the little guy, infused his administration from the get-go with lawyers and executives connected to the fossil fuels conglomerate, Koch Industries, and/or front groups funded by its two majority owners, billionaires Charles and David Koch.

Now a step-by-step guide has been published on how to defeat the new-age robber barons, the corporate structure that made them billionaires while leaving workers with crumbs, and the enshrined political system that marches to the crack of their unaccountable whip.

Released by Cambridge University Press on August 31, the book is titled “A Manifesto for Social Progress: Ideas for a Better Society,” by Marc Fleurbaey, Professor in Economics and Humanistic Studies at Princeton University and a prolific social justice author. Reading the book feels like finding a large flashlight after endless days of stumbling around in a dark cave.

The book provides an essential historical understanding of how institutions designed to serve the public interest became co-opted by the powerful and wealthy and morphed into grotesque disfigurations of their original purpose. The steps that must be taken in order to restructure these institutions and the political process are based on the findings of over 300 social scientists who are involved in the International Panel on Social Progress (IPSP), of which Fleurbaey was one of the initiators.

The book provides concrete steps for both the individual and grassroots groups to take to make governments, institutions, and corporations responsive to the public interest. A key tenet of the vision for change is this:

“In the long run, society follows movements that are largely initiated by large groups of people with similar interests and who push for change, bit by bit, until the dam breaks or the ground slides.”

The women’s movement is cited as proof that this works, with the author writing:

“One century ago, most women had no voting right, were considered legal minors on a par with children in their households, and were almost completely dependent on males for their survival and reproductive life, unless they joined a female religious order where freedom was also very limited. Even if their situation remains very imperfect, and even if some countries have stayed behind, the transformation has been absolutely life-changing for many women. Lately, even the daily disrespect and harassment that women have endured is under serious pressure. Could such a sea change have been initiated by the hypothetical oligarchy, certainly composed of old males at least when the change started? This seems most unlikely. It was the relentless pressure of women themselves that changed norms. True, they were helped by technological innovation (contraception) and historical accidents (war efforts requiring female labor force), but they were at the front line of historic battles for voting rights, reproductive rights, and access to professions. The recent #MeToo wave has been carried by women’s initiative all along.”

Those involved in the women’s liberation movement in the United States will be able to immediately relate to the recommendations in this book. Women, individually and in groups, waged long battles to break down barriers. They held consciousness-raising meetings. They forced banks in the U.S. to provide women with credit cards. They forced textbook publishers to include photos of women in non-traditional roles like lawyers and bricklayers. They staged sit-ins and huge marches. In 1968 Carol Hanisch led a protest of the Miss America pageant over its obsession with women’s beauty.

Those efforts did not go unnoticed by the “old males” in government. The women’s movement was one of those spied on and infiltrated by the FBI program known as Cointelpro under the direct authorization of FBI Director J. Edgar Hoover, as activist and journalist Ruth Rosen explains in this Women’s E-News interview. Is the government still spying on women seeking change? Rosen offers this in the interview:

“A lot of women are not so much involved in the women’s movement but a lot of them are leaders of the current change in the ecological movement, many of them are involved in movements that are trying to get minimum wage and trying to get better conditions like paid maternity leave and paid sick leave. I don’t know more that you do except that the atmosphere clearly after the Snowden material came out tells us all that when we write an email and we are on the phone, we should be aware of the fact it is very possible in this atmosphere trying to balance national security with civil rights that we have underestimated how much surveillance is going on.”

One of the most important chapters in the book is on “Reforming Capitalism” where Fleurbaey takes a cold, hard look at the modern corporation – which is minting billionaires while degrading labor rights and worker pay on a global basis. The author explains:

Those corporate revenues and profits are being strategically deployed to undermine democracy. Fleurbaey writes:

“In 2017 total spending on lobbying in the USA was around $336 billion, a 140 percent increase in less than twenty years…And if lobbying was not enough, political contributions and campaign financing have also increased significantly over the last twenty years. That is leading to a situation where many would strongly argue that democratic politics have been captured and an oligarchic rule is coming to impose itself.”

At Wall Street On Parade, we don’t actually think that “oligarchic rule is coming,” we think it’s clearly arrived. (See: Koch Industries Is Staffing Up with Voter Data Scientists to Tip the November Election to the Extreme Right.)

Princeton’s Woodrow Wilson School of Public and International Affairs will hold a panel discussion on the book and its vision for change from 4:30 to 6:00 P.M. on November 26 at Robertson Hall. The discussion is open to the public. Speakers will include Fleurbaey; John Bowen, Dunbar-Van Cleve Professor in Arts & Sciences, Professor of Sociocultural Anthropology, Washington University in St. Louis; Leslye Obiora, Professor of Law, University of Arizona; Eldar Shafir, Professor in Behavioral Science and Public Policy, Professor of Psychology and Public Affairs, Princeton University.