Financial Health of U.S. Consumer Will Determine Severity of the Next Recession 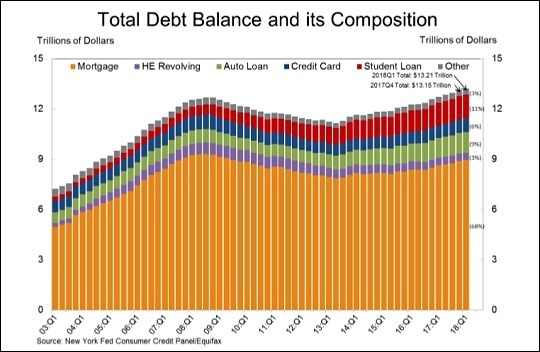 Approximately two-thirds of U.S. gross domestic product (GDP) derives from the consumer. Without financially healthy consumers, the economy cannot prosper. In a July 30 interview on the cable news channel, CNBC, Jamie Dimon, the Chairman and CEO of JPMorgan Chase, the largest bank in the U.S., said that “the consumer’s in good shape; their balance sheet’s in good shape.”

On May 17 the Center for Microeconomic Data at the Federal Reserve Bank of New York released its Quarterly Report on Household Debt and Credit which raised some notable questions as to whether Jamie Dimon actually has his finger on the pulse of the U.S. consumer.

According to the report, “aggregate household debt balances increased in the first quarter of 2018, for the 15th consecutive quarter. As of March 31, 2018, total household indebtedness stood at $13.21 trillion,” which is $536 billion higher than it was at the end of the third quarter of 2008. That was when the country was ravaged by the worst financial crash since the Great Depression.

Hiding in footnotes in the report is a subject that should be of concern to every engaged American – from both a humanitarian and economic standpoint. That subject is America’s young people who are crippled under student loan debt. According to the report, student loan debt grew by $29 billion in the quarter and stood at $1.41 trillion as of March 31, 2018. An alarming 10.7 percent of aggregate student debt was 90 or more days delinquent or in default. But that hardly captures the problem. The New York Fed provides this caveat:

In 2013 the Consumer Financial Protection Bureau (CFPB) asked for public comment on making college more affordable while also asking the public to report their experiences with private student lenders – which includes the large Wall Street banks that had been bailed out by the U.S. taxpayer during the financial crisis.

The CFPB received almost 30,000 responses. The reports from our nation’s young people were so gut-wrenching that we wrote a three-part series on the ongoing financial crises these young people were facing. (See related articles below.) One young college graduate, James C., summed up the horror for the CFPB, writing as follows:

Millions of students across America did not understand that their private student bank loan was capitalizing the interest onto the original principal – even when they were enrolled in college.

These unprecedented student debt levels are crippling the U.S. economy in multiple ways. Millions of these young people now have impaired credit ratings and cannot buy a home. That retards economic growth as household formation is a key driver of GDP as it increases consumption for things like washers, dryers, refrigerators, dishwashers and other large-ticket items. Moody’s Analytics previously estimated that each new household formed leads to $145,000 of economic activity.

Another negative impact is that debt-laden young people will be less likely to risk starting a new business – another engine of economic growth. One young woman, Amanda B., told the CFPB that she had “graduated with over 100,000 in student loan dept [sic] from citibank that has recently been sold to discover. I have been laid off twice since graduation, entering the job market in 2008 when things started going downhill, economy wise. I currently make 400 a week after taxes, and my student loan payment is 922 a month. That is over half of my monthly income. I have luckily been able to pay it up until my recent lay off, I have started a new job and will begin payments again in April. I cant even think about the amount of debt that I have without feeling sick to my stomach. And Ive told my parents not to expect grandkids until these are paid off. I have a dream of starting a business and I cant take that kind of risk with that debt. I went to college to follow my dreams and college debt seems to be keeping me from my future. It saddens me to think I would have been better off without my education.”

In August of last year, the U.S. Census Bureau reported that “A third of young people, or 24 million of those aged 18 to 34, lived under their parents’ roof in 2015. More young adults lived with parents than with a spouse in 2016. Almost 9 in 10 of the young people who lived with their parents a year ago are still living there.”

When a nation fails its young people, it not only fails its own humanity — it also fails its economic future.