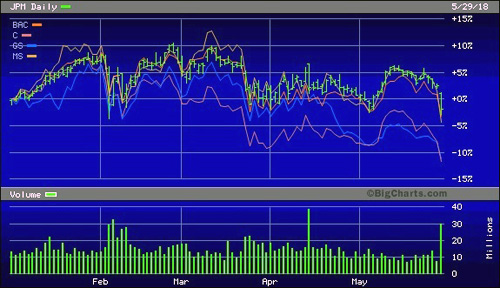 Big Wall Street bank stocks outpaced the decline in the markets yesterday by a big margin. That’s a serious problem but here’s a bigger problem: if you get your information from mainstream media, you have no idea this happened or what it portends for the U.S. economy.

Corporate media (a/k/a “mainstream” media) is obsessed with ratings, clickbait and celebrities behaving badly – which goes a long way in explaining why the U.S. has a billionaire celebrity in the oval office who publicly talks about television ratings when he greets hostages released by North Korea.

It’s also now clear why so many members of Congress claimed that nobody could have seen the 2008 financial crisis coming: mainstream media simply refused to heed and report on the many warnings. The same thing happened yesterday.

The Standard and Poor’s 500 Index fell by 1.16 percent yesterday while big banks on Wall Street fell by three, four and five times that amount. Morgan Stanley fell by a whopping 5.75 percent, helping its decline along by announcing at a conference that its wealth management division has been experiencing a slowdown since March. JPMorgan Chase, which serially touts its “fortress balance sheet,” shed 4.27 percent. Citigroup and Bank of America were down 3.99 and 3.98 percent, respectively, while Goldman Sachs shed 3.40 percent. All of the banks traded on heavier than normal volume – another negative signal.

The carnage in U.S. bank stocks followed turmoil in Italian bank stocks overnight and selloffs in broader European stock indices over Italy’s failure to form a coalition government and the prospect of a new fall election that may fuel more anti European Union sentiment.

Adding to financial alarm bells was a further decline of 6.22 percent in the share price of Deutsche Bank, a major player on Wall Street. Since the start of this year, Deutsche’s stock has lost a stunning 41.5 percent of its value and the company has been forced to announce it is slashing thousands of jobs. In 2016 the International Monetary Fund (IMF) issued a report that singled out Deutsche Bank as a significant contributor to systemic risks globally. A graphic (see below) showed that contagion from Deutsche Bank would have outward spillover effects to each of the Wall Street banks that traded poorly yesterday: Morgan Stanley, JPMorgan Chase, Citigroup, Bank of America and Goldman Sachs.

The Federal Reserve, the primary regulator of these Wall Street bank holding companies, is not just missing in action in terms of stemming the potential for contagion like that which occurred in 2008, it’s actually making matters worse. Reuters reports that today the Fed will begin to propose rules to water down the Volcker Rule – the part of the Dodd-Frank financial reform legislation of 2010 that was meant to curtail Wall Street’s use of Federally insured deposits to make risky bets for the house. The rule provided so many loopholes that it has never been a serious threat to Wall Street.

The Fed also provided a windfall last June to these Wall Street banks. Following the Fed’s Comprehensive Capital Analysis and Review stress tests (CCAR), it allowed these Wall Street behemoths to erode their capital through enormous share buybacks and increases in their cash dividends to shareholders. The Fed’s actions ignored the massive concentration of derivatives held by these handful of firms.

In 2016 researchers at the U.S. Treasury’s Office of Financial Research, Jill Cetina, Mark Paddrik and Sriram Rajan, mapped out for federal regulators and the general public the potential for contagion and systemic counterparty risks building up inside these Wall Street banks. The report effectively stated that the Fed’s stress tests were failing to capture the real risk on Wall Street. According to the researchers, the critical problem is not what would happen if the largest counterparty to a specific bank failed but what would happen if that counterparty happened to be the counterparty to other systemically important Wall Street banks.

The researchers correctly found that the Fed’s stress test “looks exclusively at the direct loss concentration risk, and does not consider the ramifications of indirect losses that may come through a shared counterparty, who is systemically important.” By focusing on “bank-level solvency” instead of the financial system as a whole, the Federal Reserve is very likely dramatically underestimating the fragility of the U.S. financial system in times of stress.

Potential contagion from European bank losses, Deutsche Bank’s woes and interlinkages between Wall Street banks are not the only sources of concern. Another alarm bell that sounded yesterday was that MetLife, a large insurer, appeared to be trading with the Wall Street herd. It lost 5.27 percent of its market cap. In January, the Trump administration dropped its court fight to keep the designation of MetLife as a SIFI (systemically important financial institution). Prudential Financial, another large insurance company that retains its SIFI designation, lost 5.05 percent of its market value yesterday.

It should be remembered that the SIFI designation of large insurance companies grew out of the fact that the U.S. taxpayer had to bailout another giant insurer, AIG, to the tune of $182 billion during the height of the financial crisis. Almost half of that sum went out the backdoor of AIG to the coffers of Wall Street banks and their global cousins who had made AIG a counterparty to pay off on their credit default swap derivative trades. Despite the epic financial crisis of 2008, the worst since the Great Depression, neither the public nor the Federal regulators know exactly who’s on the hook for Wall Street’s over-the-counter credit default swaps today and how much of a threat that poses to financial stability in the U.S. This is a Congressional, regulatory and leadership failure that is unprecedented in U.S. history.

Are Wall Street Banks in Trouble? You’d Never Know from the Headlines.